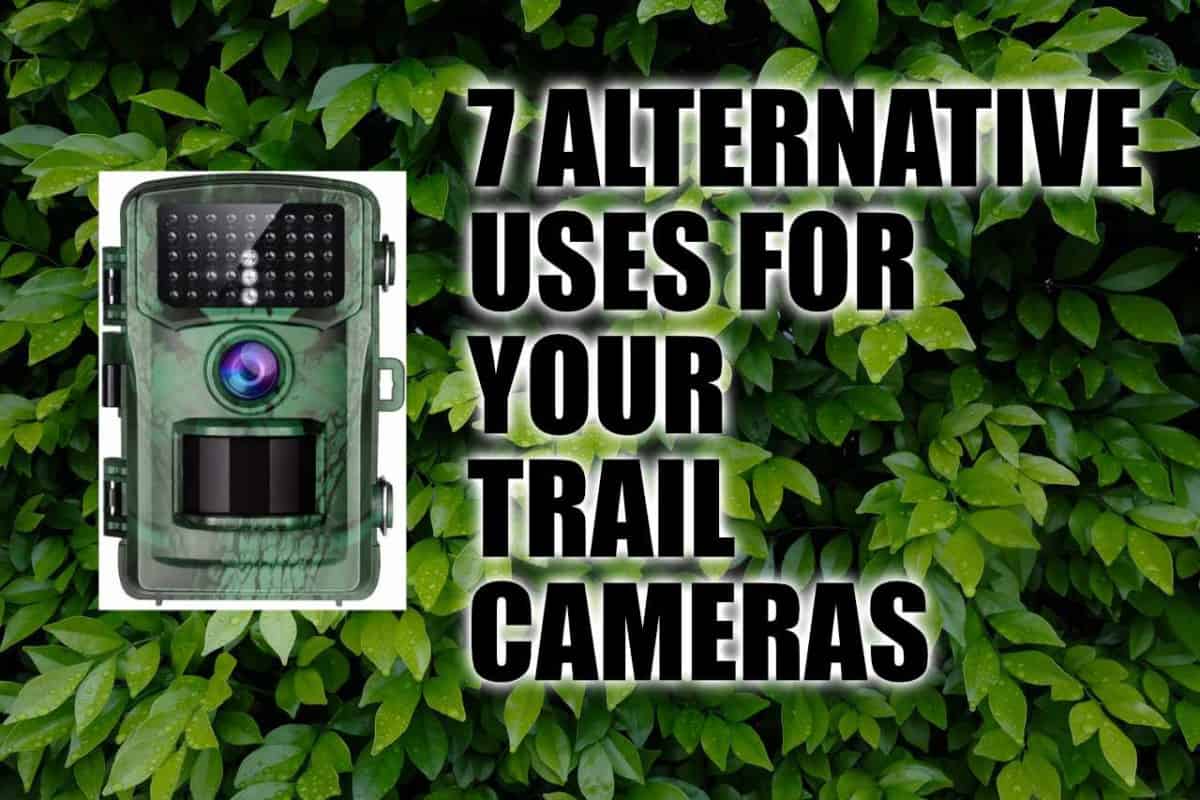 If you’re like me, you might have a bunch of trail cameras collecting dust in your garage.

Or maybe you’re thinking of buying a trail camera but don’t feel that you go out in to nature enough to justify the purchase?

In this article we’ll show you 7 great examples of how to put your trail camera to good use in and around your home.

After reading this article you’ll have a great idea why owning a trail can have so many benefits above and beyond what they were originally designed for.

So with that said, let’s get into it…

There’s several reasons why adding a trail camera to monitor your homes drive makes a lot of sense.

Examples like monitoring traffic that goes in an out of your property is the most obvious use case. Especially if you’re drive is long or doesn’t have great visibility from your property.

Another possible use case is to form a make shift video door bell if for instance you have a gate/fence at the end of your drive way!

Picking a suitable trail camera for this type of scenario highlights a number of features that you should look out for.

Trigger Speed – This is the amount of time it takes for the camera to wake from idle mode.

In this scenario you would want a fairly quick wake time since cars could be moving quite fast. So you want the camera to be able to wake in time to capture the video/photos.

Camera Recovery Time – This is the speed at which the camera can take a photo and then reset to take another. For our drive way scenario I’d advise for a quick recovery time.

Burst Mode – If your trail camera has a burst most that takes a bunch of photos in succession. Then this would be a handy feature for capturing traffic on your drive.

Resolution/Image Quality – Normally I wouldn’t say megapixels mater all that much. But in the case of reading license plates on cars you want to make sure that the image quality is good enough for this.

No Glow light – Lastly, no glow means that the flash isn’t seen by humans but still emits light. I think a no glow feature would be useful in this use case. Although you could argue that a visible flash might deter would be intruders.

Recommended options wifi if you have a short drive, 4g if its long

Using Trail Cameras to monitor your Yard or Garden

Trail cameras are designed to work in extreme natural environments. So it wouldn’t break a sweat monitoring your yard or garden.

For this use case, having an appropriate place to fix your trail cam too is the most practical issue you’ll face. I found that the best places include trees, shrubs are fence posts.

Although that you might need to add some padding behind the fence post to get the right angle. And keep in mind that if a bush or tree waves in the wind, you might find your trail cam is triggered accidentally!!

A capture mode that might be useful in this scenario is the time lapse feature that comes included in most modern trail cams.

Trigger time might play a part in this use case, if for instance you’re thinking of capturing nature in your garden then you want a model that wakes and takes a picture pretty quickly!

Battery life and wifi and 4g features might not be needed at all since you can just walk to the camera and replace the old batteries periodically. And 4g typically costs more and as a result you’ll potentially save some cash buying a cheaper model.

Wifi would still be useful though to push notifications of alerts as this is a feature that regular home security systems often include.

No glow – which is a non visible flash system, is important as it would not scare intruders.

The quality of the cheaper no glow trail cameras is low, so I recommend a higher end one with a better image quality at night. Otherwise you won’t have good evidence/data to share with the authorities.

Another good example for where time lapses would be useful are construction sites. Reasons to do so could include to monitor the progress of the work.

Or as a fun timelapse you could show clients of work your company has done in the past. Or if its a home construction project such as a house extension, then you could use the timelapse as a cool memory of the project.

The last obvious option is for the security aspect. If the construction project is far away from civilisation then trail cameras could be used to alert the owners of a potential intrusion.

No glow is a good feature for this use case, however you might want a flash in this case to scare off would be intruders!

A good detection range could also be handy in this case as you might have a large area to cover on the construction site.

4g lte could also be a good option for this scenario as it’s not likely that wifi will not be available and the push notifications could be useful to alert police of an intruder..

What about Remote Buildings and Trail Cameras?

This definitely is where 4g lte comes into play. Since you won’t have access to the building easily and it could be potentially miles away.

The Camouflage type might also play a factor here. For instance if the remote building is in a concrete ubran setting then urban camo might be more appropriate so that intruders aren’t able to easily spot it.

While if there are a lot of trees, then regular camouflage greens/browns/blacks would be more suitable.

The quality of the cheaper no glow trail cameras is low, so I recommend a higher end one with a better image quality at night. Otherwise you won’t have good evidence/data to share with the authorities.

Quality sufficient enough to capture license places for example. Megapixels play a part in this to an extent. But the no glow flash is the most important one to keep in mind.

Excellent battery life is a must for this one, maybe even solar. As you’ll likely be away from this remote building for long periods of time and won’t be able to swap out the batteries.

Using Trail cameras when you in your RV or Camper

Ok this is a more interesting idea, so take for example you’re away camping and you head in to town and leave the camper at the park.

Well having a trail camera set up with wifi or LTE can be a good way of monitoring your RV or Camper while you’re away.

No glow would be useful here potentially or possibly flash to scare away.

In this example, we’ll look at using your trial camera directly within your own home.

This is closer to how you would use a traditional CCTV camera. Only the main differences being that will be completely stand alone.

The advantages are that it’s battery powered so no wires are required. so you could set it up on occasions when you’re out of town on vacation for example.

And take it down when you’re back home.

For this use case you probably don’t need lte or no glow, instead a wifi model with decent night time quality would be fine.

Monitor Your Garage with a Trail Camera

Last but not least, the garage usecase is definetly a good one.

Especially if you’ve noticed people hanging around before and want to keep an eye on your valuables.

Placing the camera in your garage is a valid use case or more likely you’d want to place it on the outside and monitor any activity around the garage.

Attaching it to a tree when viewed at night would virtually make it invisible to an intruder.

I wouldn’t recommend a super high end camera for this, I think the example I gave previously in the home security example would work just fine.

Ok so, after all those examples, you can see that there’s plenty of different features to consider when selecting your trail camera.

Listen I could just say go for the budget end and upgrade if necessary. But the problem is that if you have to upgrade then the likely means something has happened to make you want to upgrade!

My recomendation is go for the lte no glow [insert top end model] simply because the price difference between the budget/mid tier/high end isn’t all that much.

Get this model you won’t regret it….

Alright, so there’s 7 examples of how you can use trail cameras in ingenious and inventive ways. It’s worth noting that for some of the examples you would be much better off purchasing a 4g LTE trail cam.

Since they won’t require you to visit the site where you installed the camera to check out the footage.

And in other cases, such as in your yard, it makes way more sense to go for a wifi option.

In either case, there’s lots of cool uses for trail cameras. If you do know any more that we haven’t listed here, then feel free to drop me an email and I’ll add them to the list!

Also if you did enjoy this article, then it would mean the world if you were to share it on social media or your own website.

Alright guys, that’s it for this article, if you are interesting in reading more about cameras, we have lots of cool articles related such as:

Should You Camouflage Security Cameras? (With 4 Examples)

The Ultimate Guide to Recording CCTV Footage Across Different Platforms