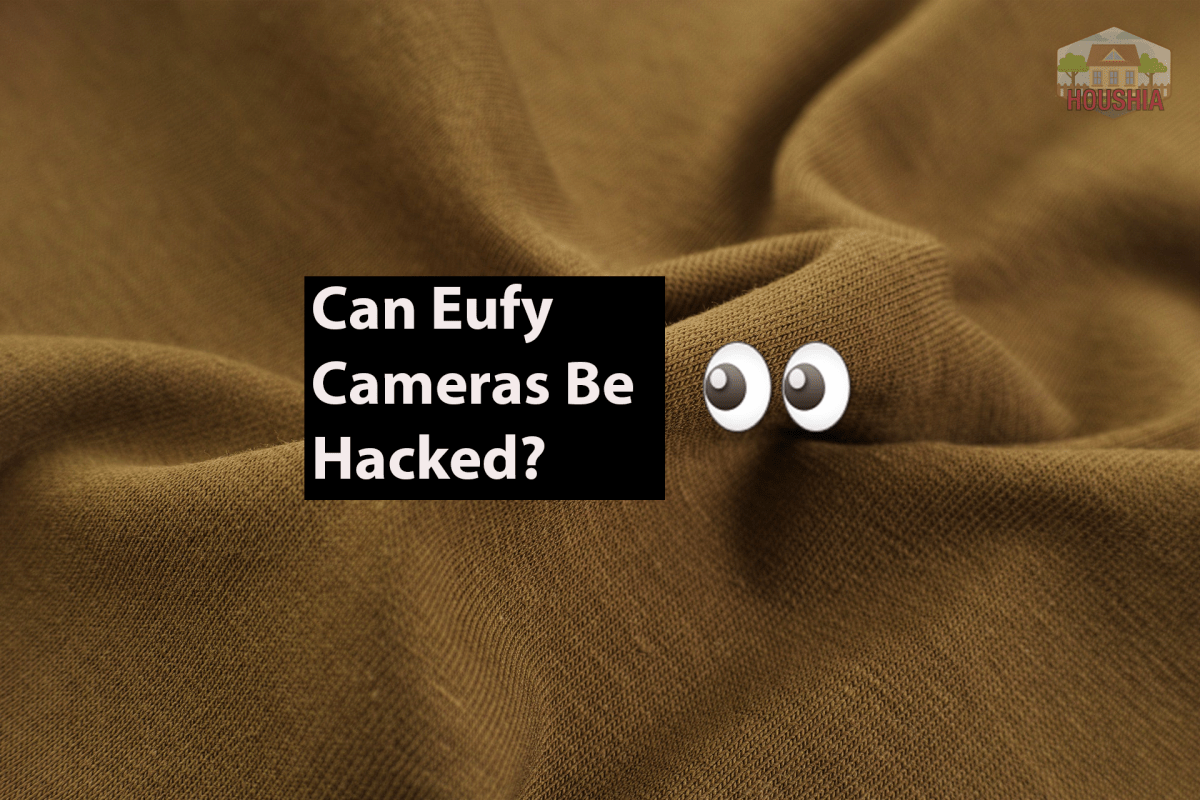 Smart cameras have grown in popularity over the past few years. Offering features such as Wi-Fi connectivity and cloud storage.

So you might be thinking can these cameras be hacked? Are they safe to install in my home?

In this article we will take a look in particular at the Eufy camera brand. This is because eufy  cameras offer a unique proposition that other brands do not. Making them far less likely to be hacked.

Can Eufy Cameras Be Hacked? No, it’s very unlikely that a Eufy camera could be hacked. While no system is ‘hack proof’ Eufy comes close to it, due to its military grade encryption and non cloud based footage storage via the 16GB base station.

When coming up with a list of features you would want when buying a security camera.  where and how securely the footage captured from those security cameras is stored is likely to come pretty high in your list of considerations.

What makes eufy so appealing to people potentially looking to purchase home security systems when there are so many other popular brands out there? In this article we will explore that question and discuss how a particular hacker may attempt to access your data both on a  cloud based system and on a eufy  where stored domestically.

Keep reading as I think you’re really benefit from gaining a basic understanding of:

Why is Eufy So Difficult to Hack?

The two major features of eufy cameras that stand out to me me are that they are not cloud based and they do not require a subscription to access special features.

You’ll find that competitive brand such as RING and Blink will offer you the cameras at a discount price but then force you to sign up to a subscription paid monthly in order to both your cameras footage and access special features that otherwise would not be available.

Whenever any system (cameras, smart phones, your laptop) transfers data from your home to a remote server there is an increased potential for a bad actor to intercept that data and use it for their own purposes. This is where the data is taken in transit between your home and wherever the company providing the security cameras has set up their servers. This is often referred to as a cloud solution.

Another vulnerability in Cloud based security camera systems is that even when the data arrives at its server safely there is still potential for that data to be accessed at the server from a third party who is not authorised.

This could be a criminal or even a government organisation if they had access to the correct legal document.  although admittedly the latter is less likely unless you are an international criminal.

Where does EUFY Store It’s Footage?

Eufy Camera systems come with two cameras but can also be extended to support up to 16 cameras and a base station that the cameras all communicate to.

it is at that base station where the data is stored on a physical chip.  so this means in simple terms that your security footage will never leave your property.  that is where it was recorded and that is where it will stay.

this is great because it eliminates several of the ways a hacker would try to steal your data in this case security camera footage.  that is because as we mentioned earlier the data doesn’t leave your property it cannot be intercepted on Transit or accessed at a later date at a company’s remote service by a hacker.

This means that the options available for a hacker to steal your eufy security camera footage is very limited in this scenario.

Talk about how security of data comes at the top of the list of features that a home security system needs. If your data is easily accessed by a third party then you’re effectively giving someone a live feed into your private home!

So That’s what makes Eufy so appealing to people potentially looking to purchase a home security system. Everything is offline. There is no internet connection required. No Subscription model (linke Ring and others) and No footage stored anywhere other than your own property.

What If A Hacker Had Access to Your Eufy Base Station?

Ok this is a good question what happens if a hacker is very keen to get your data and decides to break into your home and steal your EUFY from your base station. Can they access your data then?

Fortunately the answer is categorically no they cannot.  This is because both the account that is associated with the base station is encrypted with 256-bit encryption. That might sound complicated but if I were to say that this is the same level of security that the US military then you start to get an idea of just how safe your data is.

So a hacker would be unable to access the data on your base station even if they had physical access to the device itself.

Additionally when the cameras communicate with the base station they also send the footage over the Wi-Fi connection in a secure fashion. This is encrypted as well at 128-bit video encryption.

This means that even if a hacker were to drive up to your yard and try to connect to your Wi-Fi and get the data then. They would be unable to. Cool right?!

Lastly if you had a really smart hacker that tried to just take the memory chips from your base station and then replace them so that you were unaware that they had taken your footage.  this isn’t a problem either.  because the hips are soldered onto the logic board itself. Meaning they cannot be removed without destroying the day station.

Why Is Eufy More Secure Compared to Subscription Based Solutions Such as Ring?

Cloud is a buzz word used throughout the industry, but if you advertised it as, were going to take all of the surveillance footage around your home and ship it to an undisclosed server somewhere else in the world. Then you might think differently about it.

This isn’t an issue for things like your kids homework which doesn’t have any security risk other than a fellow student copying their work and getting the same grade. So in many instances where security is not a concern. Cloud is GREAT! But for privacy and security related issues I’d advise caution before sending your precious data off your property.

Where Ring (an amazon owned company) falls away as an attractive option for me is the hidden costs – I don’t think you should be required to pay a subscription fee to benefit from something you’ve purchased. Security cameras should be a one off purchase. Not a continuing on going cost.

I have a gripe when it comes to subscription services in general.

But also the fact that the video footage from your camera is leaving your property and going to a server owned by a private company. Employees of that company, (most likely amazon) could in theory have access to your data. And you wouldn’t even know they’ve accessed it.

Finally the government where the server is housed could access your video footage on those servers through court orders – I’m not versed in my local state or nation law on these things and I doubt many Ring customers are too.

What about if a thief tried to rip the camera off its mounting?

Ok this scenario rather than attempting to steal the base station.  a hacker decides to feel the security camera itself. This might be because they want the hardware and want to sell it.  Fortunately eufy  have thought of this and installed a 100 decibel alarm on the device.

this alarm is triggered if the  camera is removed from its mounting bracket without being authorised through the smartphone app that comes with the EUFY security camera system .

Has There ever been a recorded incident of a Eufy camera being hacked?

No, according to my research I can find no instances of Eufy cameras ever being hacked!

Eufy is one of, if not The most secure home security camera. Due largely to its high strength military encryption and the fact that the data is stored locally rather than on cloud servers.

It’s also not based on a subscription model so your security isn’t dependent on paying a monthly fee – which when you think about it, is a security flaw in itself!