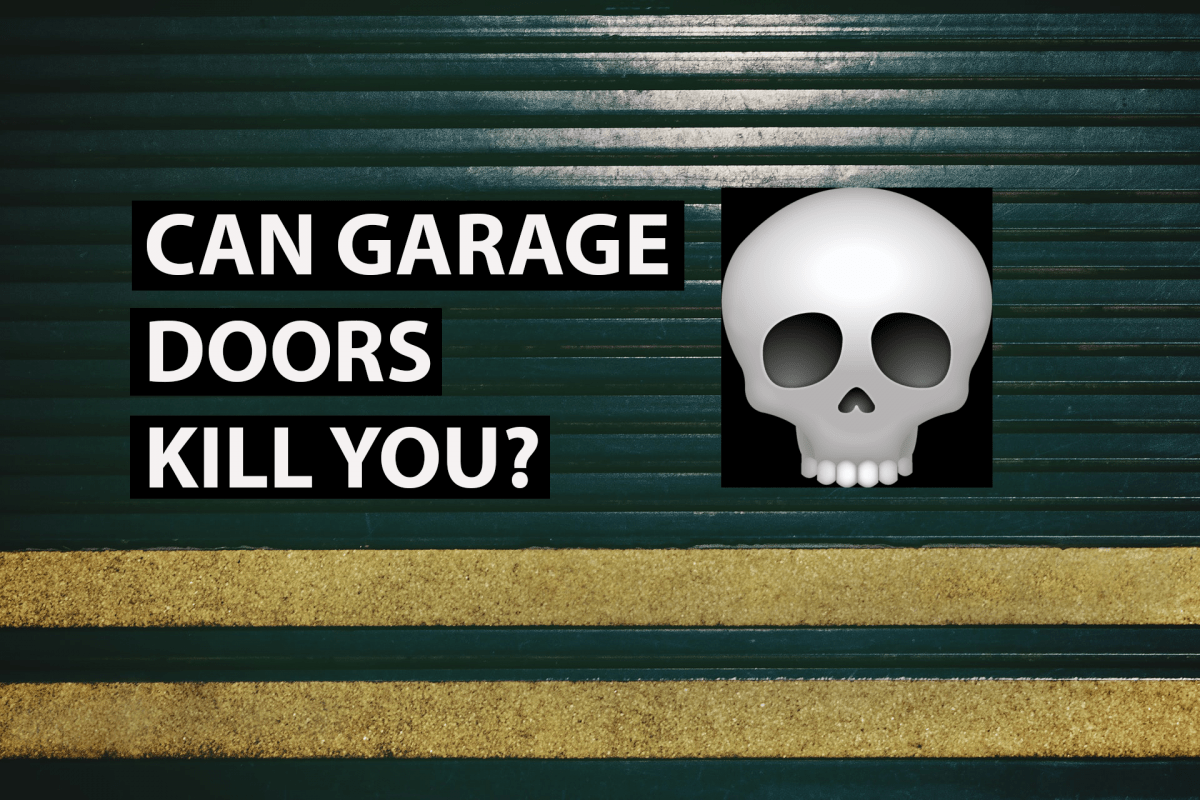 If you’re as old as me you can probably remember the scene in the 1996 blockbuster movie Scream where Tatum Riley (Rose McGowan) was crushed by the garage door opening whilst trying to crawl through the cat flap whilst trying to escape from the evil clutches of the unknown assailant?

Don’t worry I’m not going to spoil the ending of a movie that came out 24 years ago (has it really been that long!?).

Anyway I got me to thinking… Can a Garage Door Crush You? Yes it absolutely can. But only in fairly rare circumstances. Most modern garage door systems have safety systems in place which make this highly unlikely.

While the Hollywood style scenario described above is most likely a fiction of the big screen. Garage Doors like almost all seemingly innocuous objects can be deadly in the right set of circumstances. A point hammered home when if you were to google the number of deaths by vending machines per year (2.5 if you’re interested).

Can Garage Doors Crush You?

This is probably what most people would think of as the likely scenario for any kind of incident related to garage doors. I guess the unlucky person would be incapacitated some how, directly under the garage doors path and then for whatever reason the door lowers down upon them.

This scenario might sound a little far fetched. But on a long enough timeline all things are possible and while the chances are small, this is potentially more likely to happen (although the odds are still really small) compared to the other scenarios we explore later in the article.

While it’s theoretically more likely than the others, the good news is that the consequences are less severe.

This is because the overwhelming majority of modern garage doors are made of light weight materials like aluminium or fiberglass. As such if they did slowly low down onto an unwilling victim then the likelihood that they would do any real harm is relatively low.

That being said this depends on a few variables such as where the garage door lowers on to the person, the size, age and weight will also obviously play a factor.

That being said, there are a few scenarios where the outcome would be more severe such as if the garage door was made of a heavier material such as Steel. This is more likely for older garage doors before light weight alternatives were available.

The other setting that you should be aware of is industrial scale garage doors. Like the ones you might see at a warehouse or car garage. These doors are likely larger and heavier. However generally there will be less people around them and those people are likely trained in health and safety protocols.

Can Garage Doors Fall On You?

Can Garage Doors Fall On You? No, the possibility of this scenario is close to zero. This is because garage doors are guided by tracks. For a garage door to fall, it must leave the tracks.

That being said, there are cases where through neglegence of the people who installed the garage door. In these very rare cases, they only installed 1 of the torsion springs, resulting in an inbalance in the mechanism. Under these circumstances a garage door could fall on you.

However I would suspect that it would fall at an uneven angle. Rather than straight downward like a pancake.

This scenario is basically a sub category of torsion spring mishandling. Accidents involving torsion springs are way more common and we’ll explore them next…

Can Garage Springs Kill You?

This turns out to be an interesting question. On the surface you’re probably thinking what?! How can the springs be dangerous?

That’s what I thought initially, but once I started diving into the details it turns out that out of all the things that can go bad with garage doors, a torsion spring related injury can be super dangerous.

They’re also what keep the door from falling back down once it’s lifted up.

If you can image a piece of steel flying through the air at great speed with someone in proximity then you can start to see the damage that could occur. One garage technician I spoke to mentioned a job where they had to repair a garage door at the owner attempted to DIY it themselves. He said the guy spent the night in hospital with some minor injuries. It could of easily been worse!

Can Garage Door Springs Kill You? Yes they can, under the right set up circumstances garage door springs could be lethal. The sudden release of kinetic energy and close proximity of a human could prove fatal.

Can Garage Doors Kill Your Dog Or Cat?

Sadly yes, garage doors can kill your cat or dog. There are several accounts of this happening. One of which was in Caledonia family sadly last 2 pet cats over the space of 2 years when their garage door dropped on them.

This happened in much the same was as I described in the scenario in which a human is inadvertently under the garage door. The owners of the cat simply pressed the garage door button and went back into their home without thinking anything of it.

Sadly the kitten must of rushed in, got caught and then crushed. The new report stated that garage doors have a sensitivity setting that controls how much pressure that the motor applies when it closes the door.

Home owners tend to turn this up

That’s because they want the door to fix firmly to the ground when shut. The flip side of this is that if your pet is caught underneath then there can be tragic consequences.

Finally Is That Scene In Scream Possible?

Ok this I where I have to put on my myth busters can and figure out if the scene in the movie is plausible or not (totally addicted to that show ?).

I suppose if you had a pet flap large enough for a person to fit in, plus a motor strong enough to lift a human! And finally you decided to turn down the sensitivity on the garage opener motor. Then I guess this is plausible.

Although after searching around I couldn’t find any examples of this happening.

It’s also worth noting that in modern garage doors the sensitivity control is handled electronically rather than with a dial on the side of the motor. This means a technician would have to come out to alter the sensitivity. Further making this scenario impousible.

I can imagine a bunch of execs working for a garage door opening company talking through this very scenario all dressed in suits. Too funny ? .

We’ve covered a few scenarios here, some more plausible than others and some down right dangerous. So next time you open your garage door pay it the respect it deserves.

I hope you enjoyed reading this article, if you found it useful then share it with other people who might be interested in learning more about the dangers of garage doors!

P.s. if you want to learn more about Garages in general here’s Houshias garage section. We cover lots of topics like garage conversions, smart garages, lighting, flooring you name it! Garages