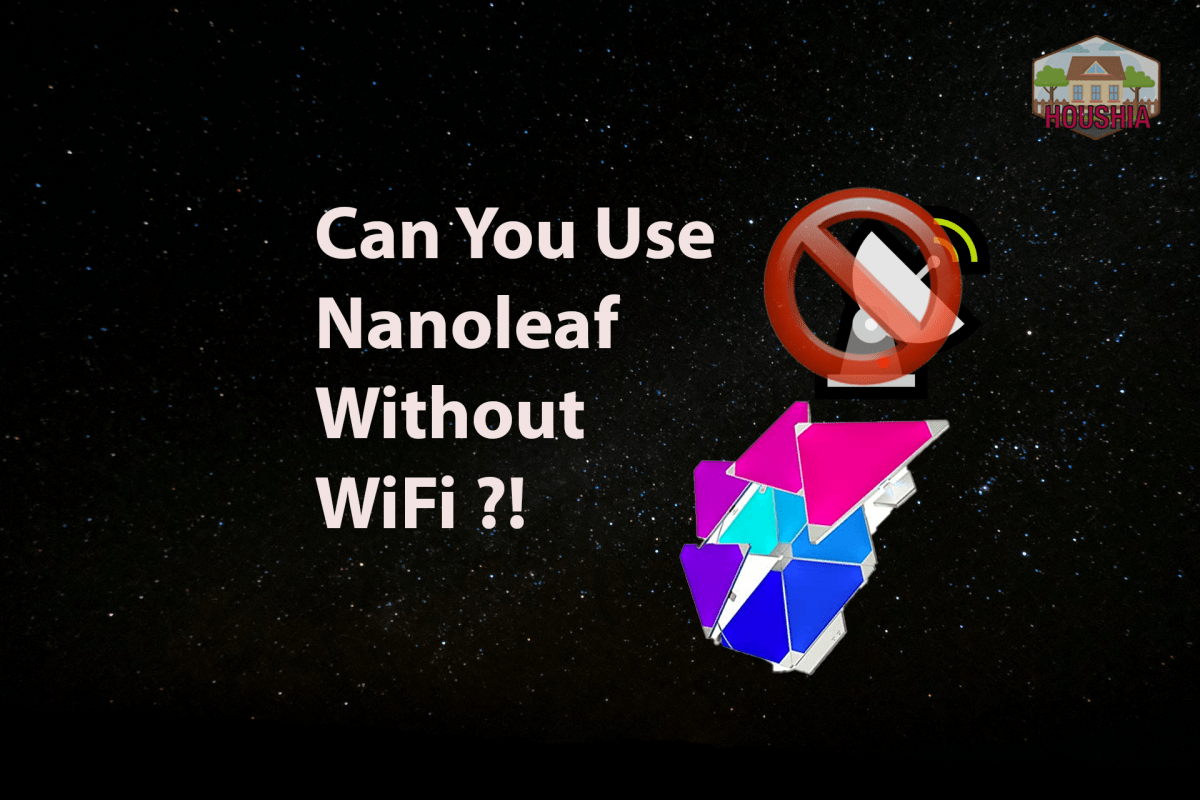 What happens if you want to install Nanoleaf products in your home and you don’t have access to 24/7 Wifi. Can you still install them?

You might be thinking this is fairly edge case. But there are circumstances where it might be a real issue such as summer homes and AirBnbs for instance.

I wanted to make the article as thorough as possible so I’ve answered the question of if you can use your nanoleaf product without wifi for each product that they offer:

The controller of the light panels has two buttons: the power and the toggle buttons. The power button turns the panels on and off while the toggle button can be used to cycle between the colors scenes.

Furthermore, you can also purchase a separate Nanoleaf Remote to control the scenes, brightness and the power wirelessly and even without Wifi connection.

The Nanoleaf Light Panels can also react to music without Wifi. Simply use a 3.5 millimeter audio cable and splinter to connect the audio source to the Rhythm. Know that the splinters and audio cables do not come with any Nanoleaf Smarter Kit. So, you have to purchase them separately.

Nanoleaf Canvas can be enjoyed even without internet connection. It can be controlled by mere touch and sound since the light panels are designed to react to music and touch.

You can try clapping your hands near the light panels, the colors and brightness will react to the sound created. You can also touch the panels and play with them. See how the colors change as you touch one square after another.

Unlike the Rhythm Edition, Nanoleaf Canvas has a built-in controller on the control square.

This allows you to adjust the lights, scenes and the brightness even without Wifi. The options available on the control square are, Next Rhythm Scene, Shuffle Scene, Next Color Scene, Adjust Brightness and Power ON/OFF.

But other than the control square, touch and voice command, the Canvas can also be controlled using a Nanoleaf remote which does not come with the Nanoleaf Canvas Smarter Kit.

You have to purchase it separately. It may be expensive at a price point of $50 but it’s nice to have an added control feature to your cool light squares.

Similar to ordinary light switches, the Smart Ivy bulbs can also be turned on and off by simply clicking the switch buttons.

Further, clicking the OFF button then the ON button quickly will activate the dimmed feature of the light bulbs.

NanoLight was the first product of the company. It was tagged in 2013 as the world’s most energy-efficient light bulb. This product does not require Wi-Fi connection for use and set up since it works similar to ordinary light bulbs.

The bulbs are simply attached to any bulb socket. But unlike average incandescent bulbs, Nanoleaf One is made of sustainable materials and uses sustainable energy without compromising the quality and electricity consumption.

Nanoleaf Bloom is also another product of Nanoleaf which does not require Wi-Fi connection for set up and everyday use. These are energy-efficient light bulbs that may as well be used as lamps when dimmed or when the night mode is activated.

It is controlled with a quick flick of the light switch connected to the bulb which works similar to standard light switches except that Nanoleaf Bloom can be dimmed by simply clicking the on and off button quickly.

You can also activate the Night Mode or the more dimmed version of Nanoleaf Bloom by switching ON, OFF, and then ON buttons quickly.

Most consumers find the futuristic look of sustainable light bulbs not suitable for modern interior designs. To address this issue the company created Nanoleaf Gem, a light bulb that is not just energy efficient but also elegantly designed with frosted white glass that blends well with most interior designs.

Nanoleaf Gem works similar to common light bulbs. It is attached to a bulb socket powered and controlled using a light switch. However, the light switch is specifically designed for Nanoleaf Gem.

It has special features which allow the glass bulb to dim its brightness without the complicated ON and OFF combinations on the light switch. Similar to the other two products, Nanoleaf Gem does not require Wi-Fi Connection for set up and use.

Setting Up Nanoleaf Products Without WiFi

They may appear tempting to the eyes but these beautifully designed panels are pricey for some. The nine piece Smarter Kit costs around $200 while the Nanoleaf Remote retails at $50. One Smarter Kit can support up to 30 panels. The rates for Light Panels Expansion Packs are $60 for the three panel expansion package and $600 for the 30 panels.

Although it can be enjoyed without Wifi, the set up for these panels definitely requires an internet connection. To set up your Nanoleaf Light Panels, mount your panels to the walls using the mounting tape provided. Make sure the wall is dry and clean to provide a secure surface for the tapes to stick on.

Now, download the Nanoleaf Smarter Series app. You can watch the one-minute video guide provided for easy set up. But to pair the light panels, open the app and tap on the “Devices” for Android phones or “My Devices” for iOS. Click the plus button to add a device.

From the list, select the “Light Panels”. The iOS version will open its camera which you will use to scan the pairing code. As for the Android version, you can simply type the pairing code on the blanks provided. The device will be successfully connected to the panels.

You can add as many color scenes or moods as you want which you can use to control through the app or manually through the Controller attached on the panels.

The Ivy Smarter Kit was launched in 2015 with a voice-controlled lighting system. It is initially sold as a package containing two Nanoleaf Smart Ivy Bulbs and a Smart Hub which allows voice control.

These Kits retail at $99. One smart hub can control up to 50 bulbs which means you can also purchase additional Smart Ivy Bulbs after buying the basic kit. The individually purchased Smart Ivy bulb costs around $25.

Setting up Nanoleaf Ivy Smarter Kit requires an ethernet port and your phone must be connected to the internet but not necessarily to a Wifi router. Hotspot or sim-based internet connection on your phone may work equally the same.

To set up your Nanoleaf Ivy Smarter Kit, the first step is to download the Nanoleaf App on your phone, iPad or tablet. Then click the “Get Started” button. Normally, an alert will pop out asking you to grant access to the Smarter Kit. Accept the grant access in order for the app to work. The next step is to create your first Home by clicking the Plus button on the top right. Write any name on the blank provided for your Smarter Kit. Then click “Add Home”.

The third step is to pair your hub with your Nanoleaf App. But first, plug the Nanoleaf Hub into an ethernet port on your router and a power outlet. On the app, tap the hub icon. A list of options will pop out. Click the “Identify” option. The pairing screen with camera will show. Capture the bottom portion of the Smart Ivy Hub which shows the 8-digit accessory setup code in the frame. The app will automatically recognize the code and process the pairing. Once successfully paired, “Accessory Added” will pop on the screen.

The fourth step is to add as many rooms as you want by clicking the plus button on the top right corner of the app. The room names can be used to control the lights using the app or by mere voice.

Next, connect the rooms to any set of Smart Ivy bulbs. Click the room name. Click “Manage” on the top right corner. Then click the “Manage Accessories” option among the list. Press the main button on the Smart Ivy Hub and turn on the lights of the bulbs you wish to connect with the room. After a few seconds, the lights on the bulbs will pulse or flash to show that they have been connected to the room.

Once you are happy with the arrangements and configurations of your light bulbs, it’s ready to go! Enjoy your Nanoleaf Smart Ivy Kit.

Nanoleaf Canvas is the company’s latest square-shaped, touch-sensitive, color-changing and voice-activated LED light panels. The LED lights cover the entire panel from edge to edge unlike the Rhythm Edition. However, this beautiful set comes with expensive price points. The 9-Square Nanoleaf Canvas Smarter Kit costs around $230 while additional square costs retails at $35.

To set up your Nanoleaf Canvas Smarter Kit, mount your panels to your dry walls using the mounting tapes provided in the package. Make sure to connect the Main Control Square to at least one of the other squares in the Kit. The controller is already built in the control square. So you just have to connect the power supply to any of the squares and plug the other end to a power source.

The next step is to set up the wireless control. But first, download the Nanoleaf Smarter App. Tap on the “Devices” for Android phones or “My Devices” for iOS. Click the plus button to add a device. From the list that will appear, select the “Canvas”. There are three ways to pair the device to the Canvas. You can scan the QR Code at the back of the Control Square, tap with NFC or enter the pairing code manually.

Your Nanoleaf Canvas is now good to go! Enjoy the different features including the touch, app and voice control.

Although the world is gradually shifting to cloud-based by making almost everything around us linked to the internet, some companies, such as the Nanoleaf, still integrate manual access and control to their products to ensure that even without internet connection their consumers can still enjoy their products.

Nanoleaf One, Bloom and Gem do not require internet connection. So you can enjoy them anytime. As for Nanoleaf Light Panels – Rhythm Edition, Canvas and Ivy Smarter Kit, their setup requires access to the internet.

However, you can enjoy them even without WIfi by simply pressing or tapping the controller on the panels, hub or light squares or by using a Nanoleaf remote.

We’ve got a bunch of articles relating to smart light and nanoleaf here on Houshia. Here’s a few articles you might want to check out after reading this one: