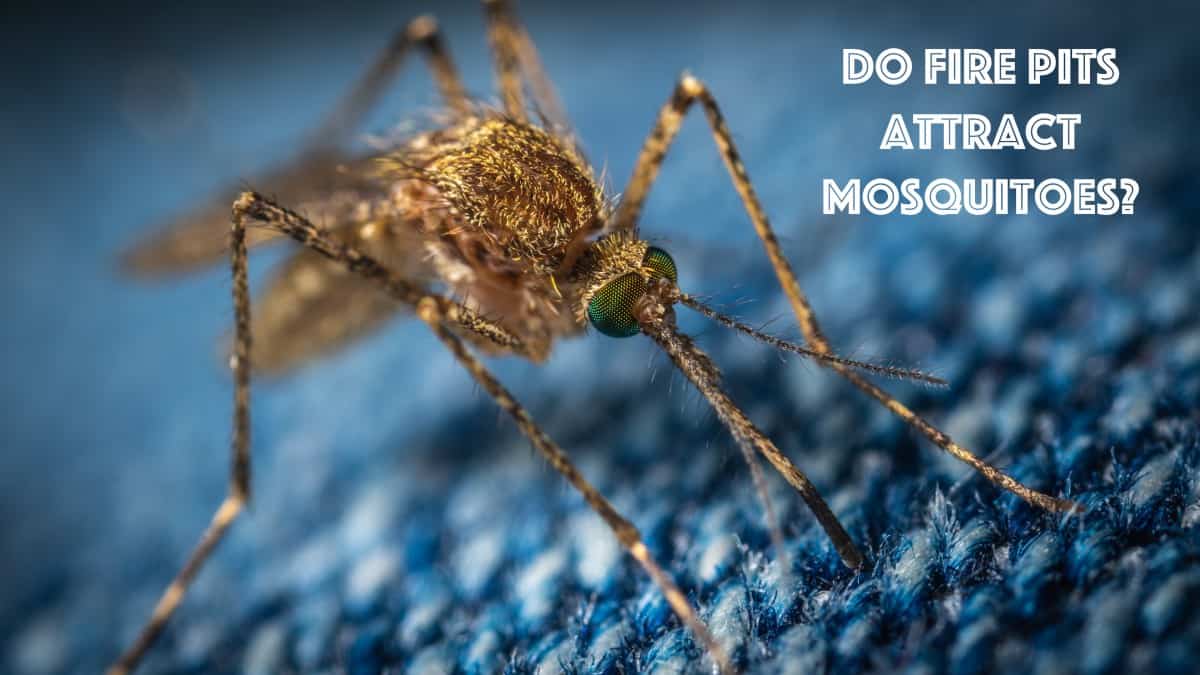 Enjoying the warmth and comfort of a fire pit on your patio or in your backyard can be one of the ultimate modes of relaxation for many. Family and friends are always welcome.

But what about bugs? Mosquitoes, in particular? They can not only be bothersome in general, but their bites also itch and can cause severe discomfort, pain and even disease.

Let’s delve deeper into how you can enjoy yourself outdoors without being infested by swarming and biting pests.

Are Mosquitoes Attracted to Fire Pits?

“Bugs, such as mosquitoes, are attracted to fire pits due to the light and warmth. That is in their nature – which will not change unless there is something that actively repels them.“

Mosquitoes are not only bothersome and the cause of itchy bites, they carry serious diseases that should greatly concern you and your guests if you face an infestation during an evening outdoors. We will discuss some ways to potentially lessen their impact on your outing.

One of the interesting ways to tackle the mosquito problem around the fire pit environment is to turn the tables on them. A fire pit, by definition, produces heat that can produce by-products that repel mosquitoes and other bugs. We will also discuss how to protect yourself with some simple solutions while sitting around a fire pit.

Why Are Mosquitoes Attracted to Fire Pits?

As mentioned above, mosquitoes and other bugs are invariably attracted to sources of heat and warmth. The underlying reasons may lie a bit deeper.

First off, studies have found that while many bugs (e.g., moths) navigate by light and are thus attracted to sources of light, that may not be true of mosquitoes. Mosquitoes are primarily on the search for food, which often comes from a host such as human beings.

Specifically, scientists have found that mosquitoes can sniff out the odor of carbon dioxide from 50+ meters away, and that they associate this smell with the presence of food nearby. This is further borne out by some of the other stimuli that attract mosquitoes, such as:

The above factors show that mosquitoes are a bit different from insects that are attracted to light and warmth per se. Mosquitoes are on the lookout for food during their active hours, which is often past sundown (though not in all cases). Any sign of heat or warmth is a beacon that signifies the possible presence of food nearby. This is the principal reason that mosquitoes can be attracted to a party gathered around a fire pit at night.

Not all Mosquitoes are the Same

Of the 3,000+ species of mosquitoes, not all of them drink blood. Out of those that do eat blood, not all eat human blood. Some of them feed in the evening, while others feed during the day.

Regardless of the variety, though, it probably seems like that there are always enough mosquitoes flitting around in your neck of the wood.

So, looking for solutions makes sense.

There is a general perception that mosquitoes, like other bugs, do not like smoke. This may require a little more investigation, though.

In general, bugs are not fond of the particulates that are suspended in the air within emissions of smoke. Mosquitoes are no exception. However, there is a difference between bugs that are merely guided by light and may shy away and mosquitoes, who are actively in search of food may prove to be more perseverant.

“So, the general rule of thumb is that smoke from a fire pit may reduce, but not completely eliminate, the onslaught of mosquito bites.“

Additionally, it is to be noted that many firepits do not, in fact, emit substantial quantities of smoke. In cities, especially, people are switching to smoke free fuels such as natural gas, propane and smokeless coal.

For the reasons outlined above, it may make sense to find out other means of repelling mosquitoes. The list of possible remedies does include certain classes of firewood that are proven to repel mosquitoes.

There are specific types of woods that do repel mosquitoes. Not all of them are suitable for use in a fire pit as fuel, but there are a few notable exceptions, as noted below.

Pinyon is not a hardwood like ash, beech or oak, which are normally favored for fire pits. However, it has a high BTU content at par with most hardwoods.

Pinyon is a softwood pine/juniper wood, which smells marvelous to humans but repels mosquitoes in all conditions. It is a very clean burning wood – unlike other pines that do not burn cleanly given higher pitch content. The pinyon smokey flavor is preferred by some backyard cooks who like grilling meat or fish on this wood.

Regardless of its other benefits, pinyon is known for its mosquito repellent properties.

This is among the grand daddies of the class of woods that repel bugs, including mosquitoes. The active ingredient of this wood is eucalyptol (or cineole as it may be known) – which is a major insect repellent that is often extracted and used in multiple organic formulations.

Like pinyon, eucalyptus burns very hot – more than 25% hotter than pinyon as a matter of fact – and smells great to humans while being abhorrent to mosquitoes.

Gum trees, as eucalyptus are called in much of North America, are easily found in some of the more tropical regions of the country. While it may be problematic to burn eucalyptus indoors, given that their residue could gum up flues and vents, eucalyptus would be perfect for outdoor settings such as fire pits.

Will Cooking Food on a Fire Pit Attract More Mosquitoes?

Since many breeds of mosquitoes are on the lookout for prey, cooking food – especially meats – will tend to attract mosquitoes. If you are planning a backyard barbecue, you should take the precaution of using natural mosquito repellents and not rely on smoke as a prime inhibitor.

What Can You Do When There is Less Smoke from Your Fire Pit?

As we discussed above, you may or may not repel mosquitoes with the smoke from a wood burning fire pit. While you could switch to specific woods that do repel mosquitoes, you must consider the fact that in many cities these days, burning wood is not desirable due to local ordinances or complaining neighbors.

On the other hand, if you begin to use gas, propane or other alternative fuels in your fire pit to get a clean burn, you might as well hand out engraved invitations to mosquitoes.

So what do you do?

Fortunately, there are a number of herbs that can be mixed in with firewood or any other fuel to prevent mosquito infestations. More on that below.

How to Protect Yourself and Your Guests

As mentioned above, fire pits will have a tendency to attract the type of mosquitoes that can create acute discomfort and spread disease – even smoke may not be an adequate repellent, unless you use wood that specifically does the trick.

In addition to the wood itself, there are other types of remedies to repel mosquitoes. There are naturally occurring compounds that are well known insect repellents, often used in oils for that same purpose. Throwing a handful on a wood, charcoal or gas fire may do the trick.

A bundle of rosemary and/or sage will smell great and do wonders to repel mosquitoes.

Citronella oils, candles and lamps are often utilized around an outdoor seating area to repel mosquitoes. One issue may be longevity – citronella typically works by masking the smells of humans, but the fast evaporation of the oils may mean that they only last for a limited period of time, not more than a couple of hours at a time.

Spraying or positioning open containers of lemon eucalyptus oil, mixed in with either water or sunflower oil, can provide protection from close to 100% of mosquito attacks over three hours or more at a time. It is one of the most powerful natural repellents.

There are a number of other essential oils, many of which are included in DIY kits for getting rid of pest infestations, which will adequately protect you against mosquitoes as you enjoy your fire pit in your backyard.

The ones that are often used given that their smells are pleasant to humans include Lavender Oil and Cinnamon Oil. Other oils, such as Tea Tree Oils, Greek Catnip and Soybean Oil do not necessarily smell good but can do the job.

Another compound, which may need to be rubbed on the skin, is geraniol – an alcohol that is often used as a flavor but can act as a fragrance and mosquito repellent.

Mosquitoes are a part of our life when we step outdoors. If you start up a fire pit and gather your family and friends around, the heat and light – not to mention the smells of people and cooking food – are sure to attract bugs. It makes sense to take some precautions to ensure an enjoyable evening without being bitten to death. Luckily, simple solutions exist so you can avoid a swarm of mosquitoes around your fire pit.

Does a Gas Fire Pit Keep Bugs Away? (Surprising Facts)

Smokeless Fire Pit vs Gas Fire Pit (Which Is Best)