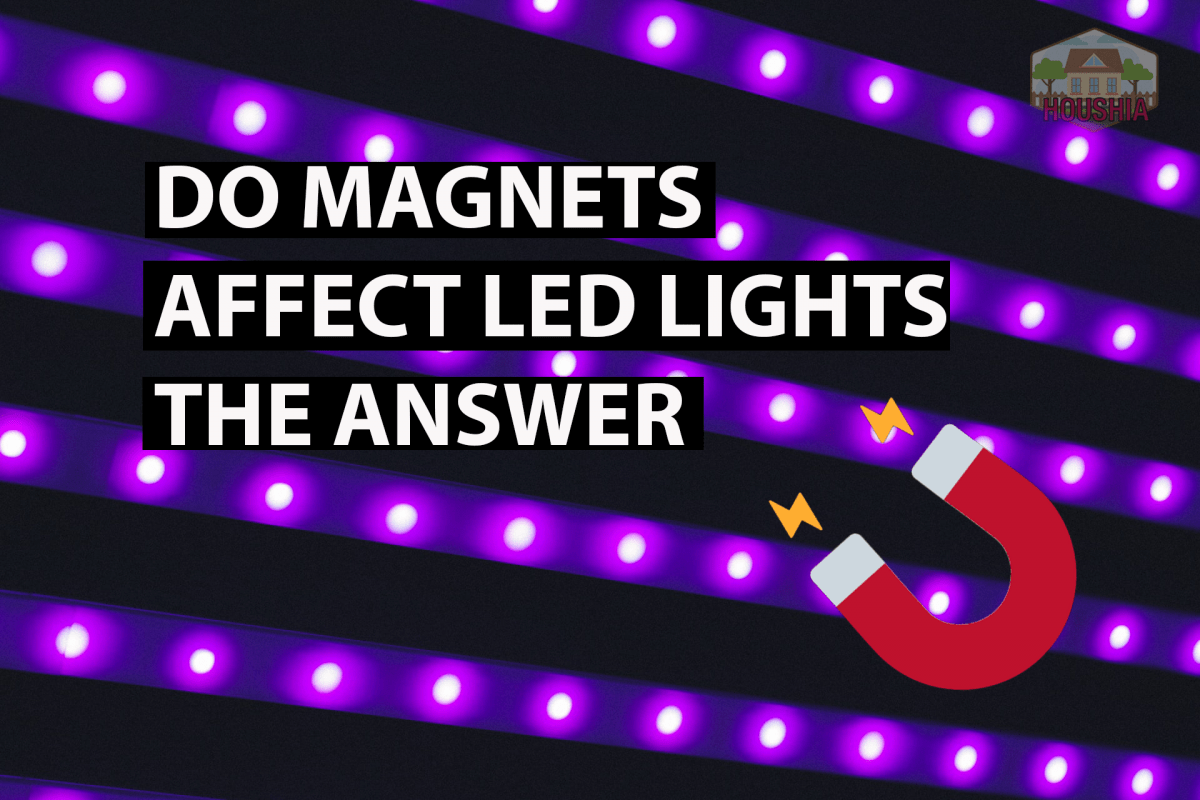 LED lights are steadily becoming the go to choice for household illumination. This is due to their longevity, energy efficiency, and smart features. While at the same time, magnets are found in a variety electrical appliance around our homes (think iPads, refrigerator doors and so on…).

Maybe you’re thinking of mounting some LED lights on magnetic strips (we cover this question in Nanoleaf and Magnets – Beginners guide) or you’ve noticed a flicking light and wondered if it hadps something to do with the large speaker it’s placed next to. So what happens when you mix LED lights with magnets? Do they affect them?

Do Magnets Affect LED lights? No, magnets do not affect LED lights. Even with fairly strong magnets, the effects are negligible. Researchers in FermiLab in Batavia, Illinois have concluded that even with magnetic fields up to 2.3 T (Tesla), the effect as to the output of the LED lights is below 1%.

You really should not be worried about your LED lights being too close to magnets because the magnetic force of the magnet does not affect the light output. Regardless, it would be beneficial to answer the issue once and for all. In this article, you will learn why and how researchers have concluded that even the strongest magnets do not affect LED lights. Furthermore, your worries that  your magnets in debit/credit cards, computer desktops, electrical appliances will somehow damage your Philips Hues will be put to rest.

The Fermi Laboratory Research on Magnets and LED Lights

The answer to the curious question of many people was investigated by some researchers through experiments and laboratory testing. The conclusion was plain and simple, magnets that exert magnetic force below 2.3T do not affect an LED’s light output. The 2.3T threshold is so high no ordinary household can produce one.

Researchers at the Fermi Laboratory Research Facility have concluded through a series of tests that magnetic fields have no effect over the light output of LED lights.

The 1% Effect Found by the Study

The 1% effect on the light output of LED lights is at most a negligible effect. Simply put, it does not change the fact that you should not be worried about your LED lights because of two simple reasons. First, unless you happen to have linear accelerators at your home, which is absurd by the way, there is no way a magnet at your house can exert 2.3T of magnetic force. Second, even if you do happen to have a linear accelerator, like some weird backyard physicist, the effect is negligible because 1% is too insignificant for you to worry about.

The Science of Measuring Magnetic Forces

It is important to measure the strength of magnets to once and for all clear out that no ordinary magnet at home can affect your LED lights. The “stronger” magnets that can significantly affect LED lights can only be found in laboratories and technologically advanced hospitals. To gauge how strong a magnet is, such as your fridge magnet, we use units of measurement.

Magnets are used for many household appliances, such as refrigerators and stereos. They exert magnetic forces that can be measured in either Teslas and Gauss. If you’re wondering why there are two measuring units, well the same reason why we have Celcius and Farenheit, people just want to use two measurement systems. To avoid confusion, remember that 1 Tesla is equivalent to 10,000 Gauss.

Since 2.3T is the threshold for magnetic fields that do not significantly affect LED lights, that would mean any magnet that produces 23,000 Gauss does not affect LED light output. To completely remove your worries over the magnets that are commonly found at your homes, let us discuss their respective magnetic strength.

Household Appliances that have Magnets

The following are a list of appliances that are commonly found at our homes. These appliances often contain magnets that make some people worry that they might affect their LEDs. To make it clear, no ordinary household appliance contains magnets that can affect LEDs light output. The magnets inside these appliances are just too weak for it to affect LEDs.

Refrigerators at your homes have magnets. However, do not fret because they only exert around 0.001T or 100 Gauss. That means your fridge magnet is nowhere near the magnetic strength required to significantly affect your LED lights. Next time you are wondering if you can put Philips Hue, Lifx or any other smart LED light near your fridge, go for it.

Your favorite sound amplifiers at home also have magnets inside that may make you nervous if they happen to be near LED lights. There is nothing to worry about as the magnetic force exerted by stereos is even weaker as compared to the magnetic strength of refrigerators. Stereos and sound systems go really well with smart light bulbs, especially due to the music swaying features of most smart LEDs. It would be a shame to separate home speakers from LED lights solely on the mistaken fact that the magnets therein will affect the bulbs.

Television sets are often paired with LED lights nowadays because of the vibe and aura the lights add to the television experience. Brands such as Philips Hue have even promoted smart LEDs that are specifically made for television and computer sets. Televisions also have magnets inside of it but are also weaker than refrigerator magnets. Simply put, magnets in televisions do not affect nearby LED lights at all.

Microwaves look really good near LED lights. Actually, most LED brands tailor their smart LEDs to setups in the living room, gaming room, and the kitchen area. It would be a shame to have microwaves being set aside just for the mistaken fact that they can affect LED lights.

Other appliances or items that have built-in magnets include debit and credit cards, vacuum cleaners, cabinet, and door latches (the magnetic ones, magnetic toys, and computer hardware). Fortunately, the magnetic force exerted by these items is insignificant. Thus, none of these items can affect your LED lights.

The research concluded by Fermi Laboratories can safely be interpreted to mean that if any magnet can exert a magnetic force higher than 2.3T, then the effects can either be inconclusive or substantial. As to the effects of a strong magnetic force to human bodies, a research has concluded that even magnetic forces that reach 8T do not significantly affect the vital signs of the human body.

So unless you plan to attach LED lights in magnetic laboratories or near high-tech MRIs that produce almost 4T of magnetic force, you should not be worried about magnets messing with your LED lights. If you are the same as me, ordinary people who just want to attach smart LEDs at home, put magnets out of your concern.

There are two factors that may contribute to LED light bulbs being affected by magnets and magnetic fields. First is the strength of the magnet. As already discussed, substantially strong magnets, ones that exceed 2.3T, can significantly affect your LED lights output. Fortunately, these stronger magnets are generally not accessible to ordinary people like us.

The second factor to consider is proximity or how close the magnets are to the LED lights. If a substantially strong magnet gets too physically close to the LED lights, especially near the head of the bulbs, then the effects will be significant. Magnetic fields interact with electrical currents that can severely affect your LED’s light output.

Magnetic fields that are usually found at home do not affect your Smart LED light output. However, please do not test that conclusion by intentionally placing magnets on the lightbulbs coils or wiring. That is a whole different story because magnets can generate albeit small amounts of electricity; it may affect the flow of current. The coil of LED lights can also be affected if a magnet gets to touch it physically.

The wiring of your LED lights should always be properly insulated to protect it, not only from being in direct contact magnets but also to other live wires. Failure to do so may cause short-circuits that can destroy your light bulbs and appliances. Furthermore, short-circuits have caused the majority of household fires around the world.

To conclude, the supposed effects of magnets over LED lights are insignificant and negligible. The effects only become apparent when the magnetic force exerted by the magnetic already reaches 2.3T. Anything less than that, there is no effect on the light output of the LEDs.

Therefore, unless you happen to have a powerful magnet such as a high-tech MRI (3T MRI)  or an experimental linear accelerator, then you should not be worried about magnets affecting your dashing and vibrant smart LED lights. Your refrigerator, stereos, debit and credit cards, magnetic toys, etc. do not pose a serious concern for your LEDs.

I hope you enjoyed reading this article, if you found it useful then share it with other people who might be interested in learning more about LED lights,

It really motivates us to keep writing!

If you are interested in reading more about Smart lights and Smart Homes then here’s a variety of articles you might find interesting: