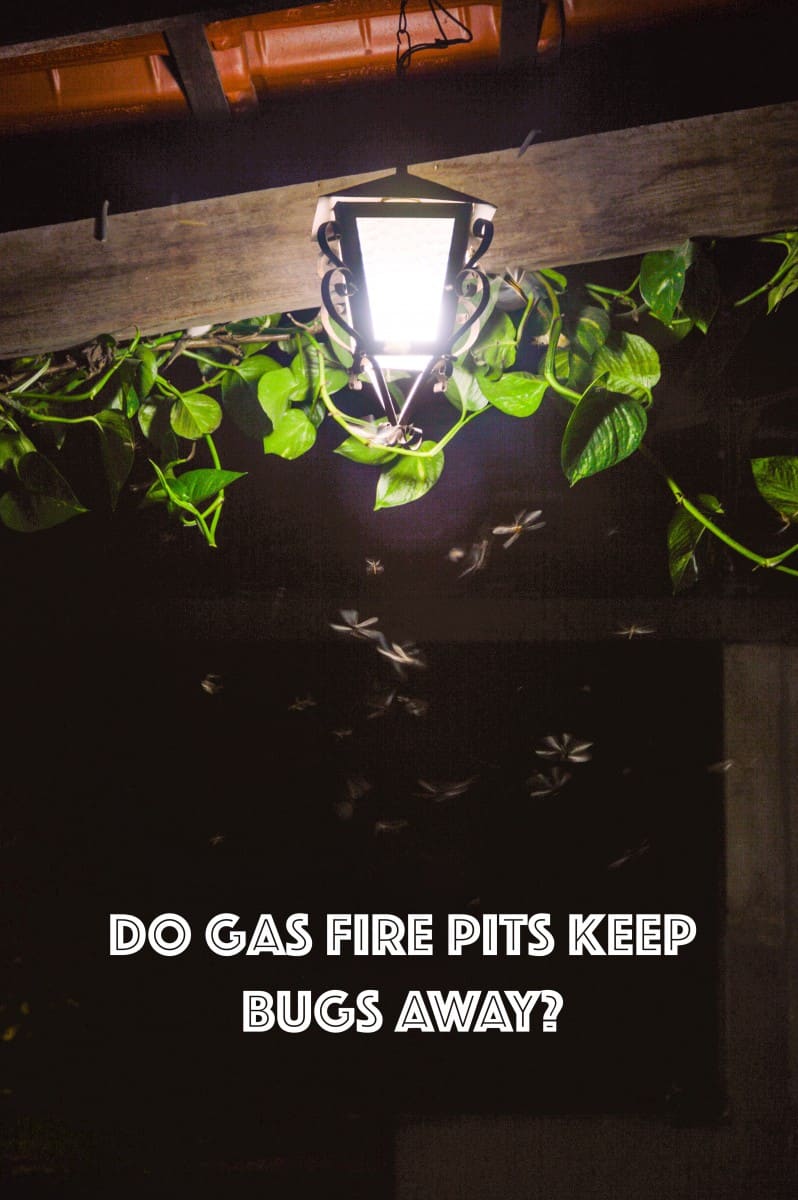 It is generally known that many bugs are drawn to the warmth and light of an outdoor fire, which means that an outdoor fire pit can be a beacon to them.

Insects are not only a bother, some of them (such as mosquitoes) bite and can spread diseases. They are one of the main sources of bother any and every time you decide to enjoy time around a fire pit in your back yard.

“Nowadays, wood burning fire pits are giving way to gas fired ones – especially within city limits. While better for the environment for sure, do these invite even more bugs? Let’s find out.“

Why are Bugs Drawn to Fire Pits?

Many types of bugs, such as moths and mosquitoes, are drawn to sources of heat and warmth. This includes both visible light as well as ultraviolet rays. As such, a fire pit standing out in a dark backdrop is a strong attraction.

Entomologists have not been able to come up with a definitive reason as to why insects are drawn to fire and light.

One theory is that certain insects, especially migratory ones, guide themselves by moonlight. The fire burning in your backyard is mistaken as a similar guiding light – which may explain why some insects fly in odd, tangential angles when they get close to a fire.

However, there are insects that make a beeline for, and eventually perish, in a fire. Quite a few of them are not migratory either. What goes on there?

Scientists explain such behavior by positing that bright lights may pinpoint sources of food, or possibly a safe haven, for certain species – which causes insects to head directly towards them.

Speaking of Food – Mosquitoes Search for Prey in the Evening

Mosquitoes are a veritable nuisance, as all fire pit owners know. Turns out that mosquitoes may not be like other bugs in terms of why they are attracted to gatherings around a fire pit.

Scientists have found that mosquitoes that bite (females) and others that actively hunt for food at night are more likely drawn by odors rather than by the light. Mosquitoes can sniff out certain odors that signify sources of food from 50 meters away, or even further.

Among the odors that attract mosquitoes are the smell of carbon dioxide, which is inevitable during a fire. People who sweat profusely, or use a lot of perfume or shampoo, also stand out to them. There are a number of other characteristics that are attractive, such as the propensity to eat a salty diet or those that tend to breathe strenuously, emitting more carbon dioxide.

Besides human characteristics, the smell of cooking meat and blood will tend to attract more mosquitoes.

Are Some Bugs Attracted to Fire Pit Smoke?

One of the commonly held beliefs is that smoke from wood burning fire pits tends to keep bugs away. This theory has been met with decidedly mixed reviews, unless you use woods such as eucalyptus or pinyon, which are natural insect repellents. People sometimes joke that bugs can only be kept away by smoke that is thick enough to make it uncomfortable for humans to be sitting through.

More to the point, there are certain bugs that are actually drawn to smoke and smoldering embers. Like mosquitoes, who are drawn to markers of human presence as mentioned above, metal blue colored bark beetles (often called Ninja beetles by the US National Fire Center who warn about them) are also known to be attracted by human perspiration or pheromones. They go beyond a nuisance since their bites hurt.

While they may not sting, various types of bark beetles (including fire- and long-horned beetles), parasitic wasps (including yellow jacketed and paper wasps) and stinging hornets are attracted to fire and smoke.

These types of insects, that are drawn to fire and smoke, may cause significant discomfort to your guests congregated around a fire pit on an otherwise serene evening.

“Whether or not smoke works is a different debate, but gas fire pits – while providing a clean burn – do not produce smoke. So the problem of bugs will compound, with the heat and light source prominent but no counteracting smoke screen.“

In general, fire pits have been known to attract unwelcome guests. Many of these infestations – such as carpenter ants and termites – may be drawn by the wood piles, whether raw or burnt. However, ants, rodents, wasps and other pests will always get attracted to a dirty area. Leaving food scraps around is a big no-no.

In terms of flying insects, smokeless fire pits will attract them without fail, unless certain precautions are taken to keep them away.

Are Gas Fire Pits More Effective at Keeping Bugs Away than Wood Fueled Ones?

There is no real evidence that gas fire pits are more effective at keeping bugs away compared to wood burning ones. As a matter of fact, it’s the contrary since wood burning fire pits emit smoke, which may reduce infestations from flying insects, whereas gas fire pits are largely smokeless and therefore have more of a propensity to attract bugs.

What Types of Gas Fire Pits Keep Bugs Away?

Given the logic above, gas fire pits by themselves do not keep bugs away. In order to protect yourself, some other means are necessary. Luckily, there are a number of options that are available for you and your guests as you gather around a fire on a balmy evening.

There are three main categories of insect repellents that are favored for outdoor use. Some of them work indoors as well, but the need may be less urgent.

Chemical repellents, or bug spray as they are colloquially known, could be natural but are often synthetically produced. They are often applied directly on the skin and remain active for several hours after application. One problem with many such spray-ons is their flammability.

There are a wide variety of natural repellents. The best-known ones include:

Citronella – Citronella can be used in many forms. In terms of direct use within a fire pit, citronella cans may be placed within the pit itself. Unlike a wood burning pit, a gas fire pit can safely incorporate a citronella can.

Citronella can also be deployed around the perimeters of the area where your outdoor party is being held, in the form of citronella lamps. Wearing citronella wristbands is also an option.

Citronella is a powerful option, which will keep bugs away for a good two or three hours at a time without replenishment.

Eucalyptus Lemon Oil – This is an extremely powerful insect repellent, which can in fact be used for extended periods of time. It is advisable to mix the oil in the proper proportion with either water (usually in an 1:3 ratio) or sunflower oil (1:9).

Other Essential Oils – Other essential oils are also available for use to protect your guests gathered around a fire pit. Examples include Lavender Oil, Cinnamon Oil, Tea Tree Oils, Greek Catnip and Soybean Oil.

Geraniol –Geraniol is manufactured by chopping up the leaves and stems of a geranium plant. After distillation, it produces a pale yellow liquid, oily in texture and with a sweetish rose scent. Besides its use as a possible flavoring agent, geranium works as a powerful insect repellent, especially for mosquitoes but also effective on other bugs.

Geranium is typically applied on the skin and will work to keep bugs away for several hours.

Sprinkling Rosemary and/or Sage –Another natural remedy for bugs is to put sprigs of rosemary and/or sage in the fire pit. While they may need to be replenished from time to time, their natural odor is pleasant to humans but will keep bugs at bay.

Bug zappers have gained in popularity since they don’t require either application on to the skin, or placement within the fire pit or around the area where your guests are gathered.

Typically, electronic repellents emit ultraviolet rays, which attract and then kills insects. These zappers need to be hung close to a fire pit – the only requirement is a power outlet, the gizmo does the rest without any need for attention, replenishment or other bother.

There are a number of plants that are excellent as insect repellents. Planting some around the boundaries of the area your fire pit is located in may be a good idea. While they likely will not get rid of pests entirely, given that they are not concentrated enough, plants or trees such as thyme, lemon thyme, lemongrass, lemon basil, lavender and camphor will certainly reduce the level of infestation.

Bugs are invariably attracted to sources of heat and light, some obsessively so. As such, fire pits are a natural attraction for insects of both the flying and crawling variety. Gas fueled fire pits do not produce much smoke, which means they tend to attract more bugs than wood burning ones. However, there are some simple remedies that will let you enjoy a relatively peaceful evening – try them out instead of being bitten for hours on end.

Smokeless Fire Pit vs Gas Fire Pit (Which Is Best)