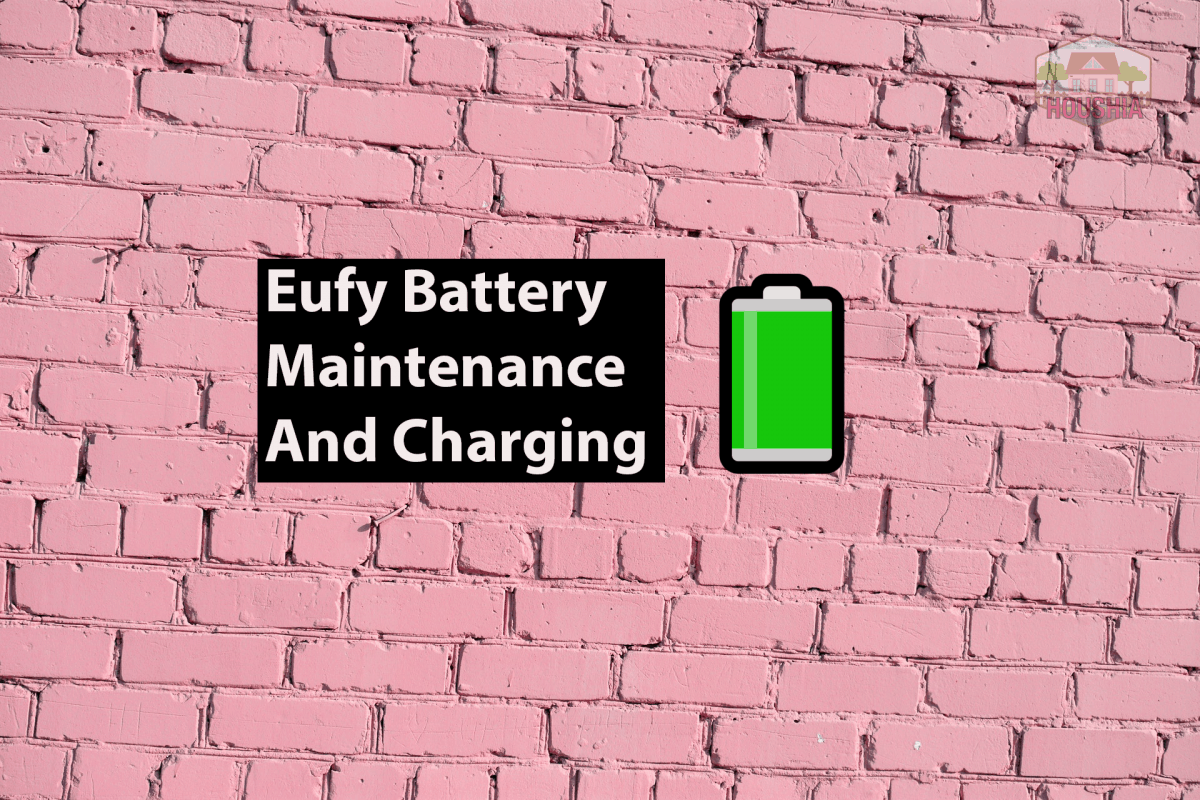 This article answers some of the most common questions you may have with eufy Security camera battery maintenance and charging.

Because this security camera system is wireless and battery powered. You have some extra things to take into account that you wouldn’t necessarily have to think about with a fully wired system.

The three main questions this article will answer are:

How Do You Know When a Eufy Battery Is Charged? The short answer being, the smartphone application will tell you if they are charged or not and the specific percentage charge of the battery.

How do you charge a Eufy Camera? Eufy cameras are advertised to have 365 days of battery charge for a normal use cycle. In order to charge them, You would just detach them from their Mount and use a regular USB micro charging device.

How do you replace a Eufy Battery? The short answer is you can’t. Removing the battery will result in damaging the security camera. The waterproof rating will be ruined. Only the manufacturer or a qualified technician can change or replace the battery.

That’s the brief explanation for these common questions, but that’s really just scratching the surface. I’d encourage you to take the time to read this article, in less than 10 minutes you’ll have a great understanding of how to really take care of your security camera’s battery so that it will last you for years.

We also cover a few cool ideas that mean you may never need to charge your battery! Curious? Let’s dive in:

How Do You Charge a Eufy Camera?

Knowing when your security camera is charged might seem like a simple question on the surface. However, this question gets a little bit more complicated when you have multiple security cameras.

What I would suggest in this scenario and similar scenarios. Is that you plan a schedule for when you charge your security cameras.

After all, you don’t want to get the ladder. Charge one of the exterior security cameras only to find the very next day that another security camera that requires a step ladder to access has now run low on battery and requires charging.

What was a simple task can now become quite tedious.

So the simple solution to this is to charge all of the cameras that are difficult to access on the exterior at once. It will take a few hours of one day in the entire year. That way you know that all the cameras will run low on battery roughly at the same time the following year.

As for interior security cameras, these have an innovative mounting mechanism which uses magnets and a semi circular Dome. In order to detach the camera from the mounting bracket, you simply just apply force and remove it.

This means that the battery maintenance and charging is far more simpler for these cameras in these positions.

Solar power to charge your cameras

If coming up with a yearly charging cycle doesn’t sound like something you’d like to do and you don’t feel particularly safe on a step ladder. Then why not consider just using solar power so that you never need to charge your security cameras?

A simple, low cost, cheap to buy solar panel can be fixed to each individual security camera. This means that the cameras themselves will be constantly supplied with electricity from the sun.

There is an additional cost of course associated with buying these solar power panels. But they are relatively minor and I’ve found a few on Amazon if you are interested.

Consider though, if you do go down this route. Because the camera is always plugged into the charger (In this case, a solar panel). Then the waterproofing for the camera may be affected. So I would suggest if you are going to do this. To place the camera in an area where it won’t get direct water on from rain.

You might be wondering why you can’t replace the batteries?

Let me explain why you probably never will need to change the battery. These wireless security cameras run on a 13,000 milliamp hour battery. These batteries consist of four cells, the same of which is used by Tesla in their cars.

Only Tesla of course used 10s of thousands of these batteries!

Lithium ion batteries are usually rated to be recharged over 1000 times. Because these wireless security cameras only need to be recharged once per year. You could literally run this camera for up to 1000 years before the battery degraded.

So unless there’s a fault in your particular unit, there’s no reason to even think about changing the battery.

Although in a later paragraph I will discuss in theory how you could change the battery if you really had to. Spoiler alert it will most likely ruin the waterproof rating of the camera.

As a side note, if you’re worried about someone stealing the camera if its externally mounted then a 100db alarm is triggered if it is removed from its mount.

How will I know if my eufy camera batteries are running low?

So you’ll be able to identify if a particular battery is running low.

Camera positions where the battery of the security camera tends to drain faster include. Porches. Driveways and garages.

This is most likely because those cameras get triggered more often than other cameras would do. This results in the charge for those cameras draining quicker.

However, the 365 day battery rating for each camera takes into account up to 10 motion activated triggers per day per camera.

So unless you’re getting a lot of alerts, you’re unlikely to see that one camera drains much quicker than the others.

Lastly because the camera app is connected to the Internet, you can cheque the status of your individual cameras from any location in the world. This is particularly useful if you are on vacation, for instance.

I love this feature!

How do you charge a Eufy Camera?

There is a USB point at the back of the camera. It has a rubber seal to protect the waterproof rating of the camera. Simply Peel back this covering to reveal the micro USB port.

You can now plug in a standard USB charger to charge the camera.

I found that charges with multiple connectors work really well for this use case. If you’re planning on charging several cameras at the same time. They are relatively inexpensive and I found a few on Amazon. If you want to cheque them out.

Incidentally, these charges are useful for a lot of other purposes as well. A great Purchase!

How do you replace a Eufy Battery?

Batteries are not replaceable. Opening up the housing will ruin the waterproofing!

However, if you have no choice and you have to try to attempt to replace the batteries, then this is what I would do.

Be very careful when you disassemble the security camera. Remember, you’re only wanting to replace the battery and the last thing you want to do is to damage the other electronic components of the security camera. An I Fixit kit. Used for building laptops and PC’s would be really useful for this purpose.

Here’s a link to a kit that I would recommend. It’s also super useful for any electronic disassembly tasks.

You could in theory buy some tesla style batteries and replace the existing ones, but in all honestly this isn’t worth your time and you’d potentially break the camera in the process if you didn’t know what you’re doing. Plus the waterproofing would be ruined.

Once you have access to the batteries, simply replace them with your replacement parts. Reassemble the security camera and cross your fingers.

As I have mentioned earlier Eufy have designed the camera for the last years so it is unlikely that you’ll need to replace the battery during the product’s life span.

Okay, that’s it. You now have all the information you need for proper battery maintenance and care for your EUFY security camera system.

In reality, these security cameras require little to no maintenance, although we’ve covered some of the scenarios you might want to think about. you’re not going to see them in all likelihood.

I really like these battery powered security system solutions. There’s a few companies out there that do them, but I think EUFY do them the best.

If you are interested in buying a system like this, then here’s my recommendation for a 2 camera system that includes the base station. This, in my opinion, offers the best value for money.

Okay, that’s it. Thanks for reading and see you in the next one.

We do have several other articles covering EUFY Security cameras why don’t you check them out here: