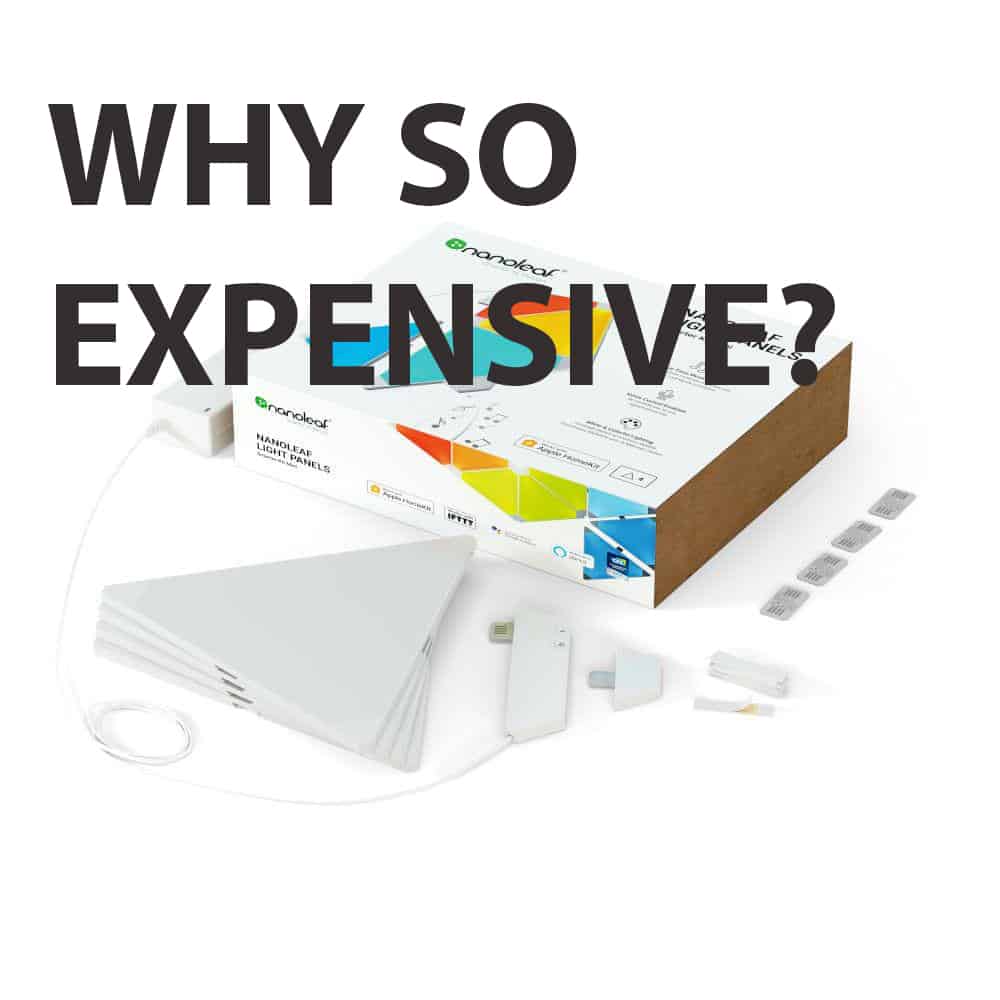 Nanoleaf panels are both innovative and artistic in their own unique way, but you can’t deny that they are more expensive than most of the smart light panels out there.

Nanoleaf panels are expensive because of three reasons: the technology being used, the manufacturing of the product, and the brand Nanoleaf itself. These factors increase the overall quality of the product making it deserving of a high but reasonable price.

In this article, we will have a closer inspection of why Nanoleaf panels are expensive.

The Technology Behind Its Light Panels

Nanoleaf is known for its interactive and reactive light panels. Its light can be fully customized using a mobile application, can react to music in real-time, and can even support mirroring the colors of your screen.

With this advanced technology, a lot of effort and funding must have been poured into its research and development.

The Nanoleaf panels can be considered as novel products because of their cool and unique features that most commercial smart lights do not have at the moment.

This novelty means that a lot of researches have been conducted and various experts have been consulted – that’s why the products are ahead of their game.

The company also constantly conducts research projects like surveys, beta testing, and user studies that are open for public participation. Obviously, all of these researches and consultations are included in the company’s expenses and must be gained back through their sales.

The automated technology behind these panels must also be sustained through costly funding.

An example of this is the use of their surface mounting technology, a fully automated process, which ensures that the components are attached flatly on the circuit board. This is basically the framework of their light panels.

Each Product Has Improved Technology

The smart features present on each newest product are the result of the cumulative developments from their other existing products.

Each new product that they release has the best features of the previous ones topped with new innovative features. For you to better understand, take for example the history of their smart lights.

Nanoleaf first started with a voice-controlled smart light, named the “Nanoleaf Ivy Smarter Kit”, and on their next model which is named “Nanoleaf Light Panels – Rhythm Edition”, they upgraded the product into customizable light panels that can also be voice-controlled.

This was followed by the creation of another smart light panel under the name “Nanoleaf Canvas” that has an added feature of being touch-controlled aside from being voice-controlled.

This year, they even launched Shaped Series which lets you connect panels with each other even if they are differently shaped. As you can see, purchasing a certain model would mean that you’re also paying for researches done on the previous models.

Debunking the Light Panel Monopoly: Your Guide to Nanoleaf Alternatives

Are Nanoleaf Panels Worth It?

Use Of Patented Technology Is An Added Cost

The light panels also use a patented technology by Nanoleaf that enables their product to be energy efficient and produced by sustainable manufacturing processes. This technology allows the light bulbs to remain cool despite prolonged use.

The bulbs are also equipped with an overheat protection which automatically dims the light if it gets to a temperature that is above the standard. Aside from these, the bulbs are also shatter-resistant.

All of these substantially increase the lifespan of the light panels while requiring higher costs on the company’s side.

According to the company’s co-founder, the company always strives to “create technology that doesn’t exist today” citing that only 1 watt of energy is consumed at maximum brightness.

The high purchase price is even said to be a cheap price in exchange for the energy cost savings you’ll acquire in the long term use of an energy-efficient product.

The Materials And Manufacturing Cost

Nanoleaf panels appear as flat and lightweight panels that can be connected in any set-up you want. Aside from its classy look and reliable design, each panel is durable too.

Nanoleaf panels are manufactured in such a way that the product’s longevity is ensured and in return, the manufacturing process corresponds to higher costs.

Advanced manufacturing techniques are also done to ensure the quality of Nanoleaf panels. The panels are lightweight because small LEDs are attached to a folded circuit board.

These circuit boards then undergo extensive quality control while the LEDs are tested. In assembling these panels, an ultrasonic machine is used. The assembled panels are then subjected to additional testing or burn-in testing which is the process of detecting failed components when operated at extreme conditions.

When all quality tests are passed, the panels are sent to the packaging area using robots. Just imagine all these advanced methods and I’m sure you’ll get an idea of how expensive their manufacturing cost must be.

Nanoleaf research teams for designing products are based in Toronto. On the other hand, the manufacturing of all Nanoleaf products happens in their office in Shenzhen, China.

To reduce their labor costs, production lines are only based in China. The supply chain involving the sourcing of materials up to the finishing of the product is also mainly placed in China.

This means that each Nanoleaf product must then be globally distributed from their office in China. This can lead to added costs for product distribution and logistics.

Can You Use Nanoleaf Without wifi – The Complete Answer

Can Nanoleaf Be Hacked – This Answer May Surprise You…

Nanoleaf As A Brand

Any brand with an established name would correspond to a higher cost for its products. The same goes for Nanoleaf.

Nanoleaf started as a start-up company in the LED lighting industry last 2012. Their first two products are funded by Kickstarter campaigns but they were able to attract attention and garner the interest of investors.

Currently, Nanoleaf has successfully established itself globally as a green technology company that sells sustainable and design-centric lighting products. Part of the company’s success is its effective marketing and advertising efforts which are also financed by the company.

In fact, Nanoleaf was first known as the brand that manufactures the most energy-efficient light bulb. And this light bulb was actually just their very first product. Even from the beginning, they were able to nail down their brand.

Being Recognized Through Awards

Another factor that brings recognition to Nanoleaf is winning multiple awards. Their smart light panels won an award in the CES Innovation Awards which is an annual competition dedicated to recognizing design and engineering in consumer technology products.

Aside from this, Nanoleaf also won two Red Dot Awards for having the best product design last 2015. Red Dot Awards gives this award to products with outstanding design quality considering their aesthetics, functionality, and innovativeness.

Through these awards, Nanoleaf proved that it is indeed top-notch in terms of design and engineering in its field.

Nanoleaf Already Has A Trusted Reputation

As you can see, Nanoleaf has steadily built a trusted reputation and because of this, the general public is more inclined to pay for their branded products. Just like any established brand, there are expectations that the company must fulfill in order to sustain the trust of its consumers.

By doing so, the company will most likely invest more time, energy, and money. All these investments make the resulting product more expensive compared to the less recognized brands under the same industry.

As long as Nanoleaf is able to maintain the consumer’s trust as a sustainable smart lighting company, the company has the power to continue charging their products at a price they deem reasonable even if it is a bit more expensive than the others.

Some doubt the expensiveness of the Nanoleaf panels while others do not even question the high price just because of their various amazing features. But in reality, a product’s price is more than what you can see from the product itself.

There are lots of factors that go behind the pricing of each Nanoleaf panel aside from its appearance and features.

The next time you purchase something from Nanoleaf, take into consideration its technology, manufacturing process, and brand reputation, then you’ll fully understand the reason behind its expensiveness.

Can You Use Nanoleaf Without wifi – The Complete Answer

Can Nanoleaf Be Hacked – This Answer May Surprise You…