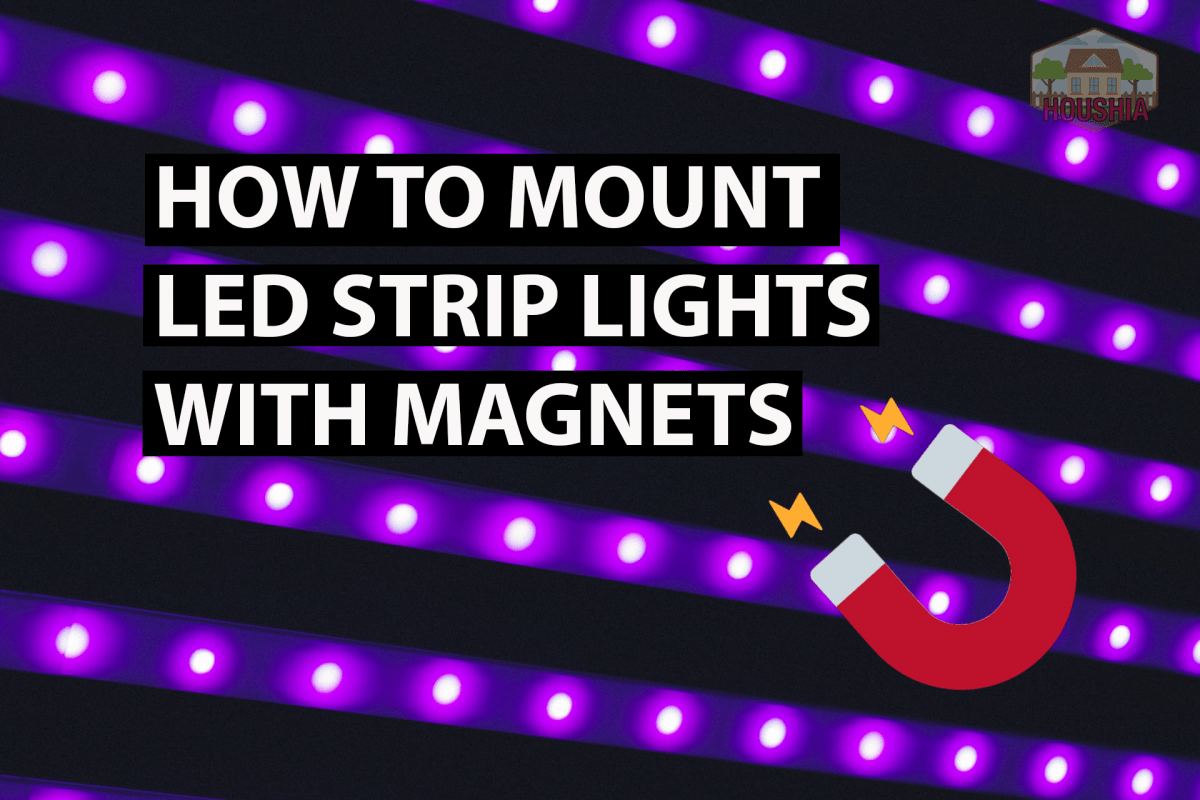 LED strip lights are some of the most versatile forms of lighting, that consist of several LED emitters mounted on a tapered, flexible circuit board. They are available in a wide range of both fixed and variable color and brightness.

These lights operate on low-voltage DC power and ships in a long reel- often 16 feet long. They can, however, be cut to length for use anywhere in your home, business, or workplace.

LED strip lights come with a double-sided adhesive, and while this is a good mounting option, it can be made even better by mounting the LED strip on a magnetic tape.

The advantages of using magnets instead of mounting adhesive are pretty obvious. You want some flexibility in your home, where you can adjust the lighting or even relocate it completely.

What Options Do I Have?

Again, by going the DIY way, you get the same product, with the same functionality for half or a third the price of a new magnetic strip kit.

The type of magnet you’ll use for mounting the LED strip is pretty standard- a flexible self-adhesive magnetic tape. The width and length of the magnetic tape roll can be modified to comfortably fit your LED strip.

Apart from the LED Strips, you’ll also need linking cables, Ac adapters (for converting AC to DC), and some mounting hardware. All these come with an LED strip lights kit.

Depending on the type of surface you’ll be installing your magnetic LED strip light, you might be required to also mount a self-adhesive magnetic sheet on the AC adapter.

The type of magnetic sheet you’ll use should be strong enough for the job since the adapter can be a bit bulkier. This video illustrates how that can be done using an A4-format, cut & glue self-adhesive magnetic sheet. The latter can be sourced from a nearby electrical store.

If you’re not a DIY enthusiast, this option is for you. Here, you don’t need a magnetic tape or some test-and-fix-it skills since an LED magnetic strip kit comes with everything you need. In a complete package, you’ll find;

Once you have any of the two LED magnetic strip lights; either a DIY or a factory-made- you can choose to install it on any magnetic surface. These LED strips are great for accent lighting and you can use them to illuminate your workbench, bookshelf, or kitchen cabinet, etc.

Like many people who are considering a change in their home lighting system, you may opt for LED strip lights in the place of an ordinary fluorescent troffer. If this is the case, here is a simple, step-by-step procedure that will cater for all your LED Magnetic Strip Lights Installation needs.

Safety comes first. Ensure that you’ve disconnected power at the breaker to avoid the risk of fire or electrocution.

As simple as that, you’re good to go! If you need more help with the installation procedure, this video will guide you further.

If you’re not confident enough with your DIY skills, you can choose to consult your electrician or do the installation under the supervision of qualified personnel.

Will the Magnet last? Is it Strong Enough?

It’s not your fault. We all have trust issues with contemporary physics, and placing your bet on a mere magnet can be a daunting experience. Just to clear the wave of uncertainty, the answer is YES. The Magnetic tape will last and the fixture won’t fall off the surface.

According to this article, the adhesive force for magnetic tape and sheet is specified in g/cm2 (grams force per square centimeter) or more recently Pascal (Pa) – SI unit for pressure.

It’s worth noting that the magnetic side of the tape cannot stick to each other since it’s of the same polarity. The magnetic side is also attracted only to magnetic materials such as iron and steel.

Magnets and LEDs- Are There Any Effects?

According to this online forum on LED lights; magnets shouldn’t harm the LEDs themselves. It’s however, not recommended to attach magnets to circuit boards or any controller circuits as they may interfere with the functioning of the components on board.

If you’re using Smart LEDs, you could be worried that these magnets would affect the WIFI signals and cause poor communication between the LEDs and the controller. Well, while there’s a connection between magnetic fields and signal propagation (radio waves, e.g. WIFI); the effect caused by a typical magnet is often negligible.

According to this Quora post, it’s clear that Electromagnetic fields (such as static electricity, magnetic fields, and light) can mix without affecting each other. The exceptions to this rule are also very unusual that you won’t see them at home.

Again, the field generated by magnets is different from Wi-Fi or light waves and the receiver can easily distinguish between the two. This way, the magnetic field will not affect the Wi-Fi of your smart LEDs.

When shopping the market for either a magnetic or an ordinary LED strip lights, you may want to consider the anatomy of the strip and its components.

A typical LED strip light is half an inch in width and up to 16 feet in length. It has also been designed with cutlines where you can cut to your desired length using a pair of scissors.

The light quality and color of the individual light emitter determines the overall look of the LED strip.

Determining the brightness of the LED Strip

Unlike the incandescent bulbs, different LED strips can have varying levels of efficiency, hence the wattage rating isn’t always helpful in determining the light output. The brightness is determined using metric lumens and a good-quality LED strip should provide at least, 1500 lumens per meter.

Perhaps some of the most important features to look out for, are the number of LEDs and the average power draw per foot. These specifications are always available and you should prioritize on, instead of worrying about the various emitter names such as 5730, 5050, 3528, or 2835.

When comparing the various types and cost of LED strips, pay keen attention to the distance between individual LED emitters. A density of 120 LEDs per meter or 36 LEDs per foot is considered perfect for an evenly distributed lighting effect.

To be on the safer side, avoid buying an LED strip without a brightness specification in lumens. You will also want to consider the LED’s power draw per foot. This determines the power consumption of the fixture and eventually the electricity cost. A rating of 4 watts per foot is a good pick.

With all these in mind, you’re probably going to buy a quality product from the market. Low quality LED strip can fail prematurely- especially if it has high brightness. This occurs when an individual LED is driven by more than 0.4 watts.

If you’re in for an LED strip with the option to switch between colors for different indoor lighting applications; there are several options available for you. Just make sure you’re getting a high-quality product that can be used anywhere in your home.

Mounting LED strip lights with magnets isn’t as complicated as it sounds. All you need is a magnetic tape roll, LED light strips, a couple of tools, and the willingness to embrace your do-it-yourself skills. This project takes less than half-an-hour; depending on the length of the surface you want to illuminate.

Hope you enjoyed reading this article. If you found it useful then please share it on your social media or website!

If you want to learn more about magnets and LED lights, we’ve written a few other articles around the subject. They’re definitely worth a read: