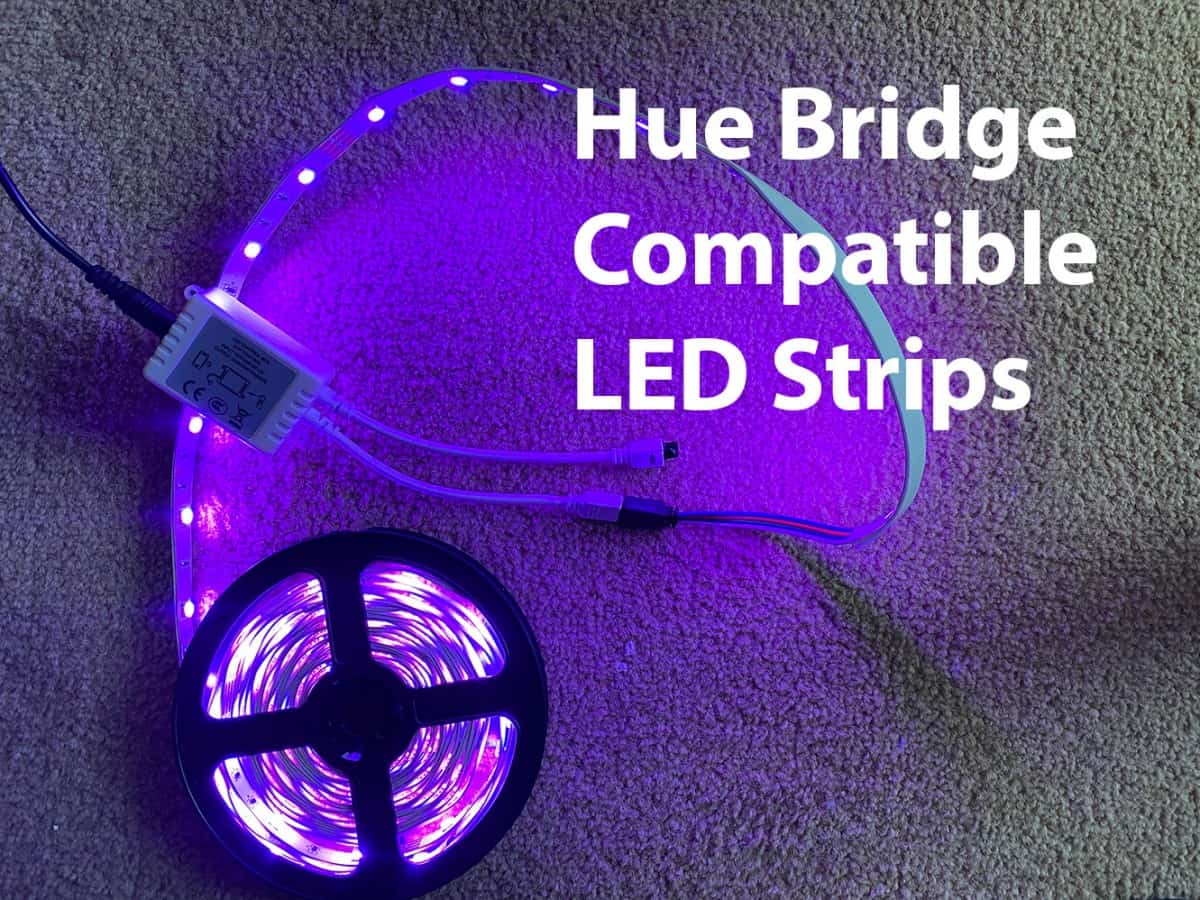 If you’re lazy to get up from your bed in the middle of the night to turn off the lights or spite the mental load of having to remember designated light switches at home, then smart lighting systems could solve your problems.

The Philips Hue bridge is the heart of a smart lighting system that you should consider. I’ll be giving you the best Hue Bridge compatible LED strip sets available on the market to incorporate in your lighting system.

If you have a Philips Hue Bridge but have no prior knowledge of smart lighting systems or you’re just not tech-savvy in general, then this guide can help prevent you from buying incompatible LED strip kits.

I’ll be discussing the LED strip kits compatible with your Hue Bridge, what sets them apart based on their features, and as a bonus,  the science behind the countless color shades of light they can cast.

Zigbee is a wireless technology used by big companies in managing the network of objects with sensors and software such as smart lighting systems. It is capable of supporting multiple devices such as remotely controlled lighting sets on a single network. Thanks to Zigbee Light Link Standard, Philips Hue Bridge is able to connect with third party LED strips sets.

The Zigbee standard operates on the IEEE 802.15.4 defined CSMA-CA protocol. CSMA-CA stands for Carrier-sense Multiple Access With Collision Avoidance. A less technical and simpler explanation for this kind of protocol’s advantages is that it allows for easier linking and reliable transmission of data with the Philips Hue Bridge.

This means that the specs of Zigbee standards allow for convenient and quick configuration between compatible devices. Other smart lighting systems also incorporate the Zigbee standard because of its convenience and accessibility between different brands and manufacturers.

The Philips Hue Bridge is the center, the brains and the heart of a smart lighting system. It functions by linking and communicating with your plugged devices such as LED strips and making them controllable through the Hue application on your mobile device.

There are unlimited home lighting decoration setups possible with the Philips Hue Bridge for it can handle up to 50 lights at the same time. Without the Hue Bridge, you are left with just pieces of LED strips without the automation, color modification and energy saving benefits.

The biggest feature of the Philips Hue Bridge is its remote accessibility. Once connected to google assistant or Alexa, you’d be able to access and manipulate your lighting controls through voice commands.

The Hue application on your mobile device would also allow for away-from-home access if you need full control of your smart lighting system while you’re at work or on vacation.

Recent firmware updates on both the original model of the Hue Bridge and second-generation model had made both devices compatible with a wider selection of lights and lamps by other manufacturers aside from Philips.

From its lone compatibility with the Zigbee Light Link standard, the firmware updates now enable connectivity with both the Light Link and Zigbee 3.0. The upgrade to Zigbee 3.0 allows for the combination of devices with separate specifications due to its backwards compatibility feature.

It is best to search for LED strips from other manufacturers if you are leaning towards purchasing less expensive lighting systems or simply exploring other brands. On average, the price for a set of Philips Hue lighting ranges from $84 for a LED strip set up to $179.99 for a smart bulb set.

Instead of going for a full-on Philips setup for your lighting arsenal, you could explore other compatible devices with the same quality and features as Philips hue models for way less.

Good lighting must also come with efficient energy consumption. I’ll be giving you LED strip ideas compatible with the LED but are still on par with Philips hue bulbs in terms of energy efficiency levels.

You could always choose to go for a vibrant smart lighting system without putting a dent on your energy budget and savings.

This set from GIDERWEL already comes with a 5M LED strip and a Zigbee compatible controller kit. At $75.98, it cost relatively less than its Philips counterparts. As it is consistent with the Philips Hue Bridge, it means that its functions and features could be controlled via the Hue application on your device.

It gets even better once you incorporate Google Assistant or Alexa on your bridge and enable voice control. With voice control, you can control the on/off feature, changing and dimming the colors. With your Hue app, you can alter timing controls from the gradual dimming of your lights as the morning sun approaches or before bedtime.

GIDERWEL LED strip sets are capable of projecting 16 million shades and colors. On top of this, you can change the temperature of white lights ranging from 2700K up to 6000K. Compared to standard light bulbs which only permanently project a certain warmth of white light, GIDERWEL LED strips can suit any of your preference. The 5M LED strip from GIDERWEL has an energy consumption of 60 watts.

The Paulmann LED strip set priced at $81.72  has a Zigbee 3.0 standard which means linking with the Philips Hue Bridge wouldn’t be a problem. Once paired up with the Hue Bridge, the Paulmann LED strip set features a bi-directional data transfer which means commands done through the Hue application would be enacted at the very first instant. Like other LED strips, it can illuminate your home with 16 million colors and shades.

Since it is from a German manufacturer, the product has received an EU Energy Efficiency level of A++ with only 20 watts. On top of all these, this LED strip set from Paulmann has an average life of 30000 hours which means they are both bright and sustainable.

The ERIA LED strip is fully controllable via the Philips Hue application. Once connected to the Hue Bridge with Amazon Alexa or Google Home, it is capable of voice control.

You can easily decorate and bend around corners of your home with the ERIA LED strip’s bendable double adhesive back which can be extended up to 200” through extension strips bought separately from ERIA. At just 24 watts, you wouldn’t have to worry about disgustingly high electricity bills.

Like many smart LED strip sets, LED strips from Innr which are priced at $73.52 can be remotely controlled via the Hue application and with Amazon Alexa or Google Home voice control.

The strips could be cut according to your preference and without having to throw either side away. This 4-meter LED strip has 240 LED bulbs that can display 16 million colors at varying brightness levels.

With an EU Energy Efficiency Label of A and just 24 watts, the Innr LED strips do not compromise either light quality or energy consumption. Its low energy output can still produce bright and colorful lighting at 1000 lumens to provide an immersive decorating experience.

With its low energy output and an average life of 25000 hours, the Innr Flex LED strips are great making a name for its sustainability.

Science Of The 16 Million Colors: RGB

While browsing or buying LED strips, it is sure that you’ll stumble across the word RGB. You’re also going to wonder how it is possible for LED strips to flash 16 million distinct shades and colors.

RGB simply stands for Red, Green and Blue. These are the three main colors behind LED lighting technology and are mixed in the process to come up with different color combinations. This method is not exclusive to LED strips as this technology is behind the colors we see on TV and computer monitors as well.

As mentioned, there are 16 million colors possible from just these three colors. Each one of these colors by itself has 256 color values. When each of these possible color values are multiplied by one another, you’d come up with a value of 16 million!

Although there are 16 million colors possible, note that these are not all the colors we could possibly see as even mainstream colors like brown and pink are difficult to achieve from the three base colors of red, green and blue. The slightest difference in shade could affect the distinction between colors and are labeled through number hashtags. For example, a shade of purple can be defined as #8411AA.

You’ll also encounter terms like RGBWW which stands for Red, Green, Blue and Warm White. This means that the LED strip can display different temperatures of white ranging from warm white(3000K), which looks a bit yellowish, to cool white (6500K). On the other hand, RGBW LED strips are only limited to displaying the base shade of white.

Make sure to maximize your smart lighting system by making full use of its full potential. If you want to set a cozy mood for bedtime, you could try setting the colors of your LED strips to warm white to lessen your eyes’ exposure to blue light.

You could even give your smart lighting system a command to gradually dim the lights as the night falls or once the morning sun has risen. Take advantage of smart LED lighting systems’ changeable color temperatures as this feature couldn’t be found in conventional ceiling bulbs.

If you spend a lot of time away from home, whether it may be for work or vacation, you could still remotely control your smart lighting system. As the evening darkness sets in, you could tinker with the timer controls to automate your lights turning on for added security around your home.

Hue sensors could also detect movement and activate lighting whenever it detects a person’s presence within its range.

Maximize efficient energy consumption by incorporating Hue sensors in your smart lighting system that will only trigger lighting activation whenever there is a person present in a specific area of your home. This gives your home a more modern and high-tech feel that would take away the burden of having to look for the switch when entering a dark area.

Hue Lights In the Pool – This was such a good Idea!

Why is Phillips Hue so expensive?

What Is The Brightest Hue Bulb

Does Philips Hue Use More Electricity?

Show off your home’s aesthetic illumination by exploring different lighting moods and tinkering with the remote functions of your lighting system. Nothing beats top-quality lighting just sitting at the palm of your hands!