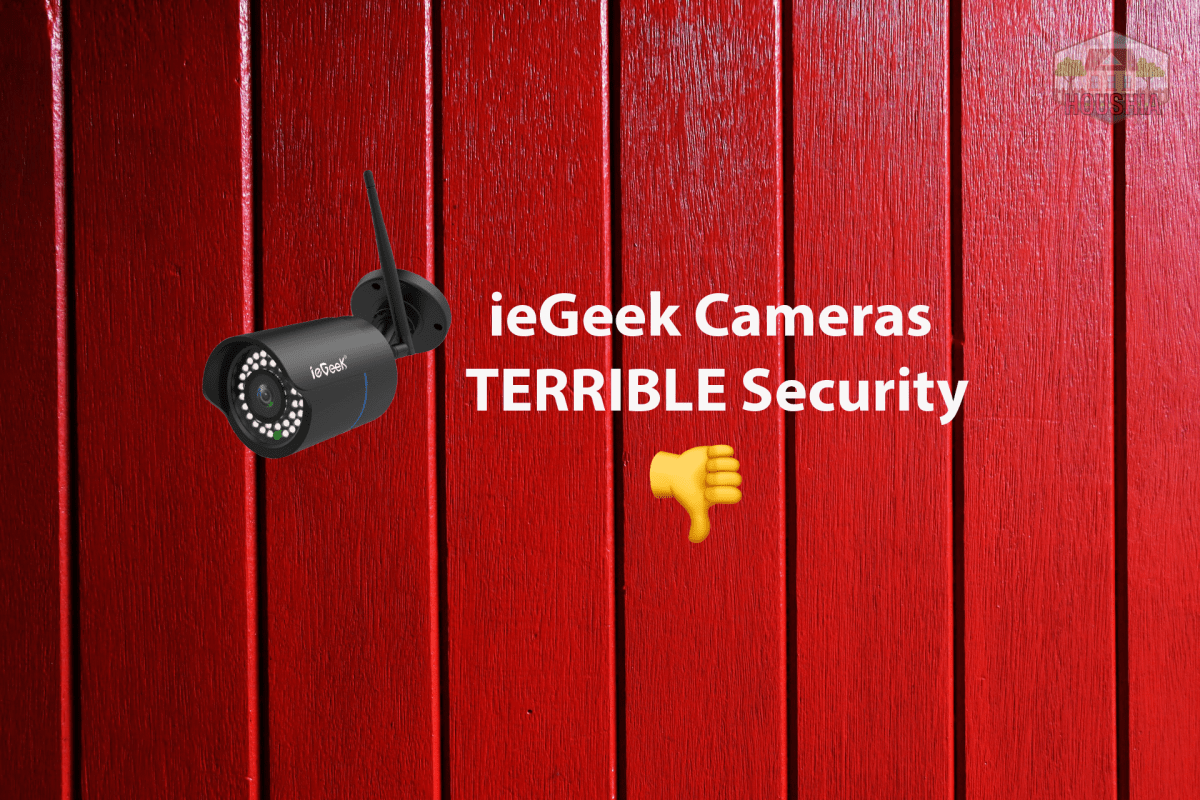 Installing a camera can be a great way to improve your home security. The mere presence of one can deter would be criminals. But what happens if your security camera has a security flaw itself?!

In this article I do a deep dive into ieGeek branded security cameras and look at if adding one to your home will leave you vulnerable to having your personal data stolen. But if you’re in a rush I’ve summed up a short paragraph here:

Are ieGeek cameras secure? No, definitely not. In terms of the communication between camera and home wifi network. They are vulnerable to hackers since the signal is not encrypted. However this is less of an issue if you have hard wired your ieGeek security cameras.

That being said, this only tells a small part of the story. By reading this article you’ll be best placed to not only decide if ieGeek cameras are for you. But also how to set up existing ieGeek cameras you already have in your home to be as secure as possible…

First off we need to establish some criteria for what we consider a “secure security camera”. Otherwise we’ll have no frame of reference to compare against. I think the best way to achieve this is to compare ieGeek to other competitor brands.

Take Eufy for example. Their cameras and smart doorbells offer both end to end encryption when the camera communicates over wifi and also high quality encryption when storing your footage on their home base station. I think this as close to a gold standard for what I would decide is a secure security camera.

One more reason that I put encryption front and center as the main criteria to consider is that ieGeek lists “easy of wifi setup” as its first sales point on the Amazon listing. So if they’re going to make a big deal about wifi on their own listing, then the very least we can do is put that feature under the microscope.

Fortunately there are over 1000+ questions answered on Amazon in regards to a variety of questions around ieGeek security camera performance. When I type “encryption” into the search box, it looks like there are several answers to similar questions that I have.

Unfortunately they are pretty much what I was expecting 😂

So that’s pretty much confirming what I feared. ieGeek cameras have NO ENCRYPTION!

Why Should You Care?

Should you even really care if your security video footage isn’t encryption? Does it even matter?

Well it matters way more in certain circumstances and less so in other. But don’t get me wrong, it’s not great either way.

When you connect your ieGeek cameras wirelessly to your home router. This is what I’d describe as the worst case scenario in secure video footage terms. That’s because anyone with a decent knowledge of how to intercept wifi signals could potentially hack your home network and intercept the footage.

Still not worried? Well this would effectively mean that they could SPY in on your home security cameras, potentially from anywhere in the world!

This isn’t as far fetched as you might think. Mainly because ieGeek relies on third party IP camera apps to integrate their cameras with your home network. Often these apps require that you enter your wifi password into them in order for the camera to communicate over the network.

Because the apps are written by potentially anyone, you can’t guarantee that after typing your password into the app and it’s sending those credentials to a hacker for nefarious reasons.

So while you gain ease of installation when setting up your cameras using wifi and don’t need to worry about pinning up wires around your house you lose out on security of data by potentially exposing your private footage to bad actors.

This scenario wouldn’t happen using Eufy or other reputable brands since they employ strong encryption both at the storage level and also the wifi transmission level. Incidentally, if you are learning more about Eufy products, check out our home security section on Houshia, we have loads more there.

Is Wired More Secure Than Wifi?

Of the two options. Wired is going to be more secure than wireless. This is because the signal from the security camera to the router can’t easily be intercepted. I say easily, because there’s still a change that someone could splice the cable and install a device that makes a copy of the footage and broadcasts it.

But this exploit requires someone to infiltrate your premises to carry out. So it’s a little less likely in my opinion.

Basically either way is not good news. They both leave the security camera wide open to exploitation.

What is encrypted security camera footage?

I’ve spoken a lot about encryption. But unless you have a basic understanding of the concept then the last section might not make too much sense. So here’s a very brief run down of what encryption is, in the context of security cameras.

In the most simplest terms possible. Encryption is a way of concealing information. In the context of security cameras, that encryption conseils the video footage from anyone who isn’t authorised to see it.

The strength of encryption can vary and you can typically you can tell how good your encryption is via a number rating.

They’ll sometimes use phrases like “military grade” or “bank grade” encryption. To give you an idea of just how secure the level of encryption is that your security camera uses. Since the numbers can be a little confusing on their own.

What level of encryption should you be looking for

Anything beyond this is overkill and not required for home setups, heck even banks wouldn’t need much more than this!

What’s an example of an encrypted security camera?

Ok I’ve explained why ieGeek isn’t that great when it comes to security, so what cameras are a good option for security conscious consumers?

My recommendation is Eufy products. Simply because there’s little to no downsides to going with this system. They use 128bit encryption when transmitting data over wifi and they have their own base station storage that stores the data at 256bit encryption. No ones getting your data with a Eufy system.

Plus they are rechargeable battery powered, meaning you don’t have to worry about providing power to the camera. How neat is that! I have several articles on Eufy products on Houshia, check them out in the home security section.

No, ieGeek cameras are not security by even the basic levels of measurement when compared to competitor brands. But that being said they are VERY cheap. That probably accounts for why they lack even the most basic of features.

Product development budget would prevent them from investing time and effort into improving their end to end encryption. Or even developing a bespoke application to run alongside their hardware.

You get what you pay for and in this case, that definitely rings true. If you’re interesting in reading more about ieGeek cameras then checkout our articles on:

Which app is BEST for ieGeek security cameras

How to switch ieGeek to WIFI

How to setup ieGeek cameras