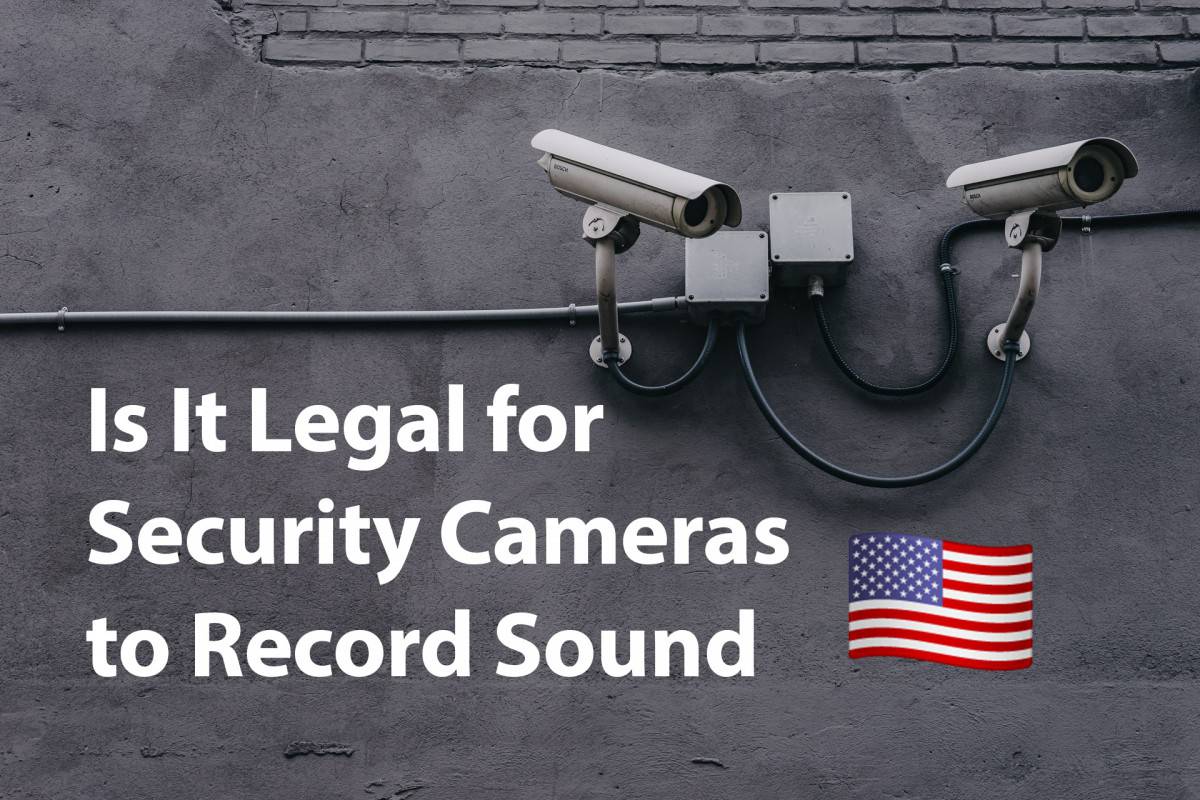 Security cameras are all over the place nowadays, everywhere you go, and everywhere you look. This is because security is important to businesses and homes.

However, it is essential for you to know the laws of recording sounds on your security cameras to avoid any inconvenience along the way. Understanding each state’s laws is crucial whether you have security cameras in your home or business place.

The following is a table of the laws on security cameras recording sounds for the top five populated states in the United States.

Legalities When It Comes to Recording with Security Cameras

Nowadays, cameras are there wherever you look, which is why it is important to know the different laws that come with it. Recording sounds in security cameras are not a one size fits all like some clothes that you wear. There are different laws applicable to each state. Most states do not allow audio camera recording in public areas, public workspaces, and public stores.

There are a lot of different reasons for recording audio or a conversation, but the rules are strict and clear in some cases. For example, it’s illegal to record your staff’s conversation without any consent from them. It is understandable that business owners and homeowners install security cameras for their own safety. However, the recording may go to the extent of invasion of privacy.

Now, there are three basic rules when it comes to privacy when recording sounds. First, it is illegal to record sound on video surveillance. Second, W-Fi recording can be considered as a cybercrime. Lastly, recording sound on security cameras laws depends on each state. With this in mind, there are other crucial things that you need to consider and be aware of.

You are walking on a very thin line when you record via Wi-Fi because it can make you a cybercriminal. Remember not to record a video in places where people expect a high level of privacy, such as bathrooms and bedrooms, without their consent. Other places that are considered to be high-level privacy are locker rooms, dressing rooms, changing rooms, hotel rooms, and showers.

Now, the best thing that you can do to avoid any penalties or felony when recording sound through security cameras is asking for consent from the parties involved.

Asking for consent matters for both video and sound recordings is vital. If it is in a workplace, make sure to get your employees’ consent and ensure that they are well informed about the security camera recording. However, if it’s in an office that handles sensitive information, consent is not applicable. Consent is only needed in this type of workplace when there is an ongoing criminal investigation.

If you have security cameras in your home that record, make sure to let your friends, family, or guests that come to your home, know that their conversations are being recorded. Once you have gotten their consent, then you are good to go. If not, then it is best to turn off the sound recording in your home.

Now, there are 12 states that you would need consent from all parties. These states are Michigan, California, Connecticut, Florida, Illinois, Massachusetts, Maryland, Montana, New Hampshire, Pennsylvania, Nevada, and Washington. As for the rest of the states and the District of Columbia, the one consent party law applies.

Placing notices and signs all over your workplace or home is another option you can do to let people know that your security cameras record sounds.

Now, as mentioned above, the laws are different in each state, and the same thing goes for the penalties if the laws are broken. The fines range from $250,000 or up to $500,000, and a person can also spend five years in prison. This is included in the Wiretap Law. Again it is crucial to get the consent of parties involved at all times when the security cameras are recording. Aside from that, you can just put your security cameras on mute.

Be very careful and knowledgeable about the laws when recording to avoid any penalties and imprisonment.

Can Home Security Cameras Record Sound – Yes! Here’s How & Why!

Can Eufy Cameras Be Hacked?

Security Cameras and the State Laws

It is always a good idea to check the state laws when you decide to put up security cameras in your business or home. Without the knowledge of the laws, you can break the laws without you knowing it. Here are the state laws for the top populated areas in the United States.

In California, video recording of ‘confidential communications’ is not allowed without consent. You would need to follow the two-party consent law in the state of California. This means that you would need at least two people’s consent to record or share their audios in a security camera. It is a crime to record or eavesdrop on any confidential communication that a person may encounter without consent.

When it comes to home security cameras, the general rule is if they are using it for self-protection, it should not be used to eavesdrop on the personal conversation and only used as self-defense if anything happens. When a camera is placed outside a home, it shouldn’t capture clear sound at a distance. If this is the case, you may be breaking the law.

It is understandable that parents care for the safety of their children, which is why some people use nanny cams in their homes. This is legal in the state. However, the nanny cams should not be placed in bathrooms or any other high privacy places in the house.

Unlike in California, one-party consent law is followed in New York. You would only need the consent of one of the parties that are included in the conversation. It is also only allowed to record a conversation if you are a contributor. When you record illegally through security cameras, it is considered a felony, and you would need to spend at least five years in jail.

As mentioned above, Illinois would need to have the consent of every party involved in a conversation. Silent video recording is also not prohibited in this state. When it comes to home surveillance, make sure to inform all parties that enter their home about the security camera recording sounds.

It is best to place signs and notices in your home so that people that will come over are aware of the situation.

Texas also has a one-party consent law where one of the parties involved should provide consent. Like the basic rule in security camera sound recording, it is not allowed to be recorded in intimate areas such as bathrooms, bedrooms, etc. However, it is allowed as long as you ask for consent.

An illegal recording is considered a felony, and a person who breaks the law will spend time in jail. However, when a person is recording personal conversations in public places such as streets or restaurants, you wouldn’t need the consent of the people involved.

Arizona also applies the one-party consent law when it comes to recording security cameras. As mentioned above, you would need the consent of at least one of the parties involved in order to record them. Surveillance is allowed for security purposes. Just like California, child monitoring devices, like nanny cams, are permitted. This is only for the sole purpose of the security of children.

Just like Illinois, you would need the consent of all parties that are involved for you to record them via security cameras. When the law is broken, a person may be charged with a third-degree felony. In Florida, a person can record through a security camera if there is a clear written notice on the premises, such as signs and notices.

A security camera is only allowed for the sole purpose of security of the premises.

As per the workplace, it is illegal to record employees without their knowledge or their consent. This is one of the reasons why offices are not installing security cameras that do not have the capability of recording sound. It also can get expensive to purchase cameras that record sounds. This would help the manufacturing costs down.

Aside from the legalities, security cameras that have sounds can have a lot of interference, and there are a lot of things going on. It also doesn’t make sense to use the sound since it wouldn’t be clear and understandable. Audio security cameras are ideal for those who are publicly facing jobs where a person may be vulnerable. These jobs are bus drivers, taxi drivers, or even a cash register job.

Again without consent, it can be intrusive, and it violates the laws, depending on the state you live in.

It would depend on the homeowner if they would like to install security cameras in their home. It is a little bit less restricting when it comes to the laws of security cameras in a home because it will be used for security purposes. When the camera is on all the time, make sure to let your friends, family, guests, and even neighbors know that they are being recorded.

Security cameras outside of your home can be turned on all-time so that you will have proof just in case any break-ins happen when you are away. However, the security cameras inside your home should be turned off if you are not away on vacation or work. With this habit, you can avoid any legal problems.

Security is a necessity nowadays. This is why you see security cameras wherever you go. Knowing the legalities and laws when it comes to recording through cameras is important. If you are knowledgeable about the laws, you can avoid any penalties or felonies that might happen to you. Remember that when recording sounds through a security camera, you would need the consent of all parties, one party, or two parties, depending on the state you live in.