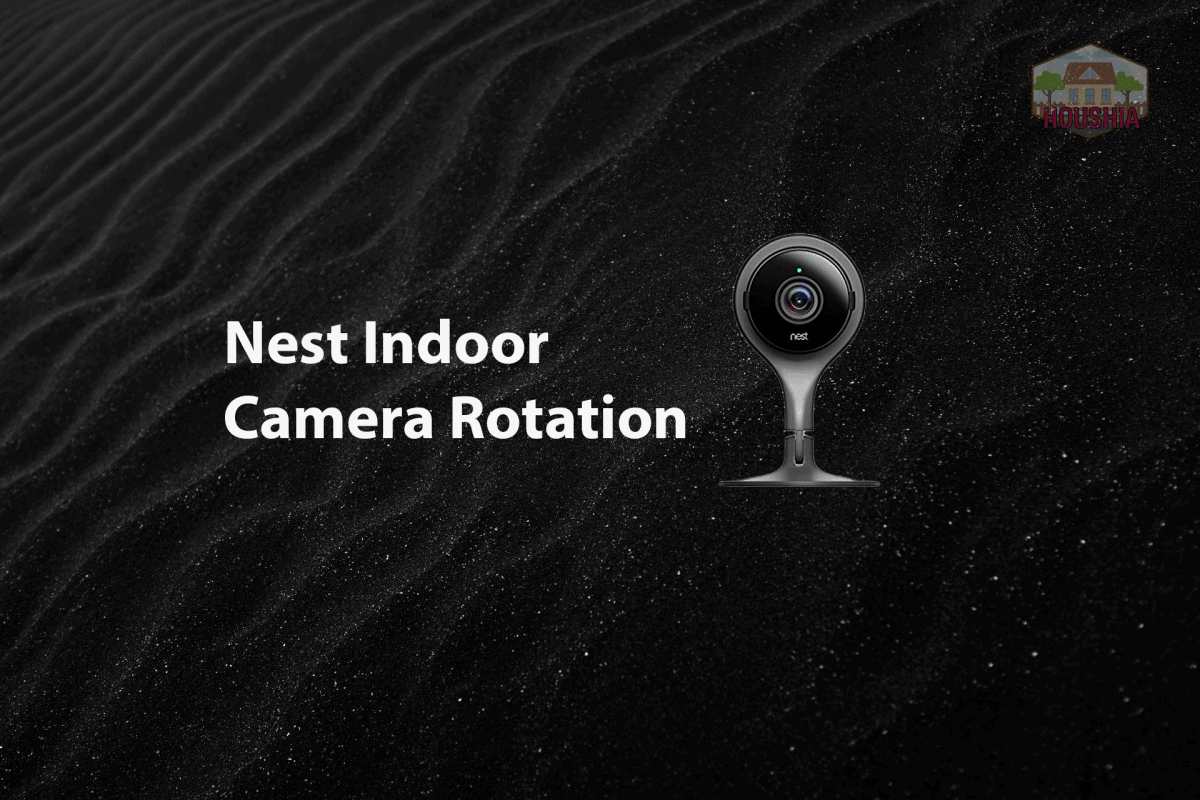 Okay, I’m not going to bury the answer deep in this article. I’m just going to come out and say it. Nests indoor cameras have a rotation feature built into the hardware itself.

So if you install your indoor nest camera. Then look on the footage and think oh gosh, this is upside down. The simple solution is to go to your camera, grasp the outer casing and then rotate it with your hand and you’ll see that the whole camera rotates up to 365 degrees.

If nest where to add some helpful illustrations to the top of the camera, then I think people wouldn’t get confused as often.

Does the nest indoor camera rotate? Both indoor and outdoor nest cameras have the ability to physically rotate 365 degrees. Meaning you can mount your camera in any orientation and you’ll be able to adjust it after the fact.

How Do You Rotate The IQ Indoor Camera?

Nest IQ camera is a slightly different model to the nest Cam. If offers some extra features such as a higher resolution camera an and an overall is probably a better product. Although you pay a little extra for it.

Just like the regular nestcam, the IQ indoor camera has the ability to physically rotate the device to the orientation that you want. So whether you’ve got the cheaper nest Cam or the more expensive IQ indoor camera, you can basically turn the image around to whatever suits you.

I think this feature is great if you’re mounting the camera on an uneven surface. Typically you want to put your camera in a position in the room that captures as much footage as possible. Usually you’re gonna put this in the up right corner of a room near the ceiling.

I found that after doing this said often go back, checked the footage and realised that the cameras mounted upside down. This is due to the fact that the camera is circular in nature, so it’s hard to tell which way is up. So again, all you do is go back to the camera, rotate it in the housing until it’s the right way up.

What about Silicon housings?

There’s a bunch of aftermarket Silicon housings for nest camson nest IQ comes. These, I think, are designed to make it a little bit more durable. Say if you drop it or if it accidentally falls off its mounting bracket.

And As for the outdoor nest Cam, it provides a little bit more protection than you otherwise would have had. However.

Does this affect the ability to rotate the camera?

Well, I think it does. Because it’s going to stop the mechanical motion of the camera, been able to twist so you effectively lose that ability.

If you are set on purchasing a Silicon housing for whatever reason, then what I would suggest is to take it off, orientate the camera using the rotation and then put the Silicon housing back on and leave it. It means a little bit more setup if you want to get your camera in the right position.

But in all honesty, once you set your security camera, you just leave it. So it adds 2 minutes onto the job. No big deal.

Why Do People Not Realise that Nest Cameras Can Rotate?

If you’re anything like me, when you get a new toy to play with, you generally open the box, grab the product, and then quickly dismiss any kind of instructions that the manufacturers helpfully let in the box.

You then raced to set up your new toy, in this case a nest Cam and then it all. It’s all easy at 1st and then you start getting into the finer details of setting up your Cam and you start thinking hold on a minute. Why is the image? Upside down.

I’ve done this countless times for other things like IKEA furniture or setting up a TV or building a new gaming PC. I think it’s just human nature at the end of the day.

So don’t beat yourself up too much. If you set up your nest Cam and then start scratching your head thinking why the image is upside down.

It’s not obvious from looking at the camera. You’d be forgiven for not realising this.

That’s why the subject comes up quite a lot on the web.

Nest could add a graphic to the camera to make it more obvious.

Can You Break the Camera By Rotating It Too Much?

I think this is a pretty unlikely scenario. Usually manufacturers test their products to destruction and they’ll know just how much you can rotate the camera before the Connections internally start to wear down.

So I’m pretty sure in a pretty standard use case you can rotate the camera housing as much as you want without fear of breaking it in the long term. I guess this is true of buying a used camera as well. I wouldn’t worry too much about considering if the housing has been rotated one too many times the camera should work.

Why Do They Allow You To Rotate The Camera?

It’s a design feature. Simple as that. You see a lot of more advanced security cameras have Motors that allow you to alter the angle of the camera after you have installed it. These tend to have more elaborate housings around them because you’ll find that they can easily get jammed or clogged up, so they internalise this in a clear plastic show

Although the Flipside of these, in my opinion, is that they are far more likely to break, because rather than using a mechanical rotation, they use electronic Motors to control it. The added advantage obviously, is that you can then change the angle of the camera after the fact. Or even programme sweeping motions for the camera.

But in the context of an internal home security camera, I think it would be a little creepy if it started rotating internally around the house. I don’t think I’d like that, and I don’t think your family would either. It would feel very, very Big Brother Ish.

Because it’s not already obvious what the right angle is for your security camera. So nest have thought of this and made it super easy to adjust the camera.

Can you do it software?

If for whatever reason you can’t rotate the camera. It’s been placed really high up and you don’t really want to risk getting to it. Virus step ladder. Then there’s always the option of rotating the image in post production using software.

While the nest app might not support this, the other option sounds pretty silly, but you could just rotate your cell phone upside down. Granted, it’s a little annoying if you kept doing it, but there’s a quick fix. I think it would be fine.

Nest offers a range of cameras and every single one of those cameras has the ability to physically rotate the camera to any orientation that you would desire.

In my opinion, they strike a good balance between functionality, affordability and simplicity. As we said earlier, there are more advanced cameras that use electronic motors to control the angle and orientation of the camera, but these come with an additional cost and are more difficult to set up and more prone to breaking.

I think for the target market of Nest, the physical rotation is far more preferable and the right balance of features and functionality.

Okay, that’s it for this article. I’ve written a bunch of more articles on nest, nest cameras and nest doorbells, so maybe you’d like to check them out in the links below.