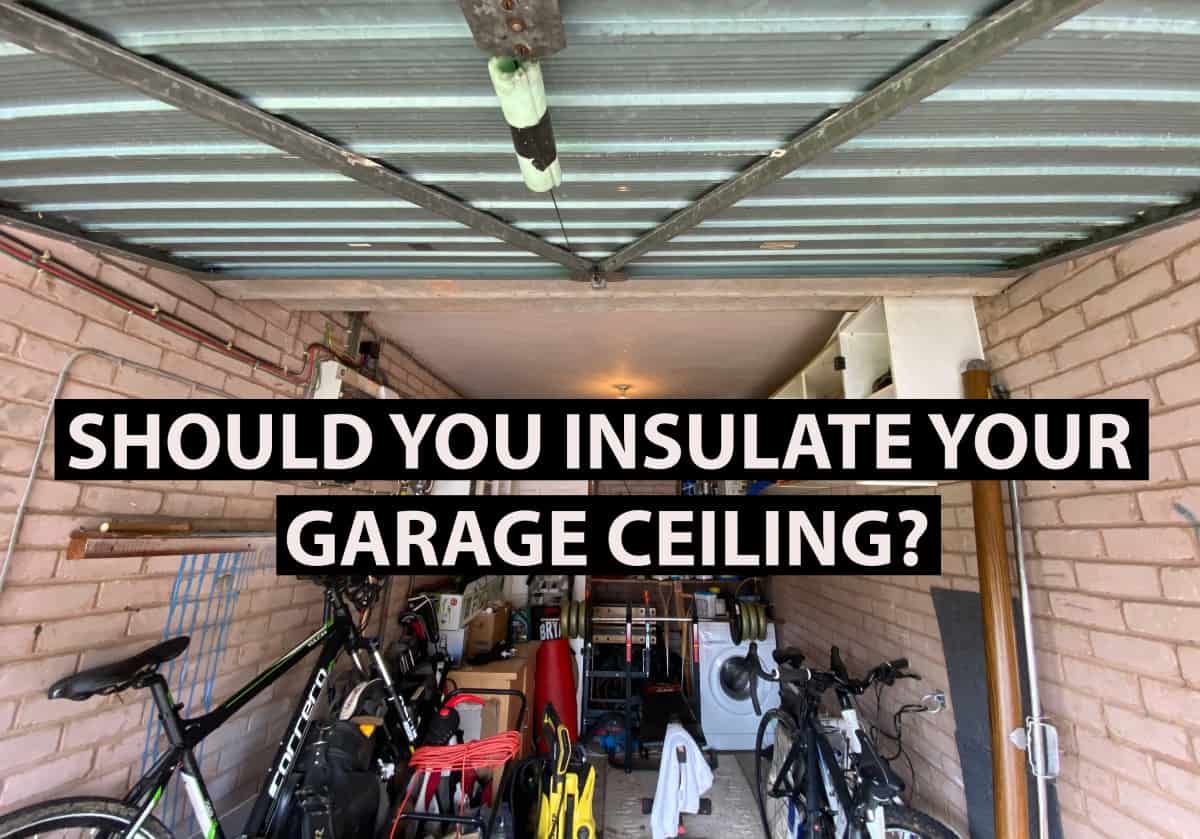 I wrote an article a few days back that touched on insulating your garage ceiling. It was a broader article on insulating your entire garage. But as I was writing that article, I realized that this was a big topic in itself and warrants its own post.

Since heat rises and your garage ceiling is…well the highest point in your garage then it’s most important thing to insulate! It’s also the least accessible since you’ll probably need a ladder to get to it. For a professional this is no problem of course. But if you’re keen on doing some DIY then you could be put off the idea.

Should I Insulate my Garage Ceiling? Yes! You absolutely should. Ceilings are the main point at which heat is lost in your garage. So keeping them well insulated can help improve your garages thermal efficiency and keep down heating costs.

There are however some gotchas that might mean you spend a bunch money on insulation and may not even need it! Read through this article and I’ll show you exactly how to install ceiling insulation and what pitfalls to look out for…

Is it worth insulating a garage ceiling below a bedroom?

This is a definite gotcha moment! Ok so if you have an integrated garage that is part of your house then you may not need insulation, it could already be there.

A good indicator of if this is the case is when you have a bedroom or bathroom directly above the garage.

This is because most US regulations require that you must have insulation in the floor of the room above the garage. This is to prevent a cold spot in your house from seeping out heat into a non insulated room i.e. the garage or car port.

So you may be in luck and won’t require insulating your ceiling at all!

How do I tell if my garage ceiling has insulation in it?

Even if you don’t have a room directly above the garage it’s important to check if there’s already insulation there. It could be that the building contractor installed some during the construction of the house. This is more likely if the house you live in is newer and less likely if its an older construction.

It’s also dependent on which state you’re from since the US is pretty big right!? And the seasonality in Idaho is gonna be way different to Hawaii. So check with your local authority on this and figure out if was something that was installed with the house. There could be some extra useful information in there as well such as what type of insulation was used. For instance fire resistant insulation vs none fire resistant varieties.

This might a little crazy drilling a hole in your ceiling. But trust me, you can patch it up real quick and no one will know it was there. Drilling or cutting out a section of the roof can let you easily inspect what’s up there. If you reach in and find a bunch of fiber glass then you’re all good, congratulations you’ve saved potentially hundreds of dollars in costs.

Ok so let’s play this one out and you’ve checked if there’s insulation in the ceiling. You reached in with your hand, rummaged around and found nada, zilch, nothing. In this case you might want to start thinking about what your options are. Or maybe you found some insulation but it was pretty old and wasn’t up to modern day standards.

What are your options?

Insulating the ceiling of a garage is slightly different to insulating say insulating the walls. The main thing to be aware of is the fire safety aspect of it. Fire safety rated insulation can buy you precious minutes during an emergency. It’s a no brainer in my book. Get fire resistant insulation!

Just like in my article where I covered insulating your entire garage there are 2 possible avenues you could go down. The first ones quicker to install but costs a whole lot more and the second is cheaper, performs at a similar level but takes waaaaay longer to get setup.

After searching around Home Depot here’s what I found:

This stuff is a foam board style setup that is suitable for fixing to both walls and ceilings. It’s also moisture rated which is important when you want to take into account condensation that can form in your garage. Especially on the ceiling. My garage ceiling used to sweat like it had been in the gym for a hard workout. I fixed this by installing a dehumidifier. Now it’s one of my favorite rooms in the house!

The pro’s of this it’s a lot easier to set up than traditional fiberglass rolls of insulation. You can fix it way easier and requires less tooling.

You can also combine it with some Amvic High density insulation which has a nice exterior pattern that could form the ceiling of your garage. Removing the need to put up dry wall.

The second approach is to use something more traditional like a roll of fiberglass insulation that’s encased by stud work. This is then covered by sheet rock to form the ceiling of your garage. This way will most likely save you money on material costs but you’ll more than likely have to hire a contractor to install it for you. Which might negate the savings you made on the materials.

I guess it’s your call and is totally dependent on your situation and budget. If you’re wanting to try yourself as at a home DIY project and you have the time then I’d go with the SilveRBoard. If however you’re in a rush and just want to get the thing done then hiring a contractor is definitely the way to go in my mind. You can always lend a hand if you’re wanting to indulge in some DIY but not get in over your head.

Other Options are Available

It’s worth noting that a lot of the time it can depend on what type of roof space your garage has. If for instance you already have wood studding running across the roof already then you might be better placed to get with rolls of fiberglass insulation since the wood is already there and this is the major work for an installation of this type.

You could also look at blower style insulation where you can install flame retardant material into the ceiling space. This type of insulation can be do in an afternoon if you wanted.

Its basically just blowing large quantities of aerated insulation material into the ceiling.

Is Insulating My Garage Ceiling Worth It?

This is a slightly different question to ‘should I insulate my garage roof’ so hear me out. Let’s say you go through all the costs of installing the best roof insulation money can by and then….well you spend hardly any time there. Or you don’t bother installing the appropriate heating system.

It would basically be all for nothing. You’d never break even on your initial investment. Garage insulation only makes sense if the room itself is going to be used and heated. Otherwise you’ve wrapped your entire garage in an over priced coat.

If you rarely enter you garage for things like grabbing tools or keeping old tins of paint. Then I’d suggest investing in a basic heating system and leaving it at that!

The reason is that you’ll probably take decades to reach the point at which the slight increase to your utilities bills will be greater than the cost of installing the insulation in the first place.

Heck you could even take the money you would of spend on materials and labor, put that in a savings account and that would cover the cost in increased bills over time!!

So ask yourself really what are you going to use the garage for. I’ve listed a few examples here where I would insulate and a couple of situations where I wouldn’t.

In this case I think it totally makes sense to go the full distance and insulate the garage and the ceiling. You’re most likely going to spend a lot of time in there and in an office you’re probably not going to be moving about a lot. So Id go insulate.

For gyms, its not so obvious. For my money, I wouldn’t bother. Simply because you’re going to be generating your own heat! Assuming you’re working out hard enough that is. Save that money and spend it on some cool equipment or a mirror to flex 🙂

This is an easy one and I would hope is obvious. With kids, you don’t want to take any risks. So I would insulate the garage ceiling and probably with sheet rock or some other kind of ceiling covering just in case any of the insulating material fell down and the kids touched it.

Converting your garage into a home cinema is super popular these days. Especially if you live far away from your local cinema. People install couches and overhead projectors to watch cool movies.

Should you install insulation, if I was doing it. I definitely would. simple because you’re putting a lot of expensive equipment in there and mold would potentially ruin them over time.

In summary yes installing insulation into your garage ceiling definitely makes sense. Consider carefully what your use case is for your garage and you can adjust your budget and decide just how far you want to go with it.

Remember all the insulation in the world won’t matter unless you heat your garage and that’s some we’ll look at in our next article.

I cover some easy solutions to heating your garage plus keeping it from getting too humid in my article on should you insulate your garage. Check it out!

Thank you so much for taking the time to read this article. If you find it helpful and think others would benefit then sharing it out on social media would be great.