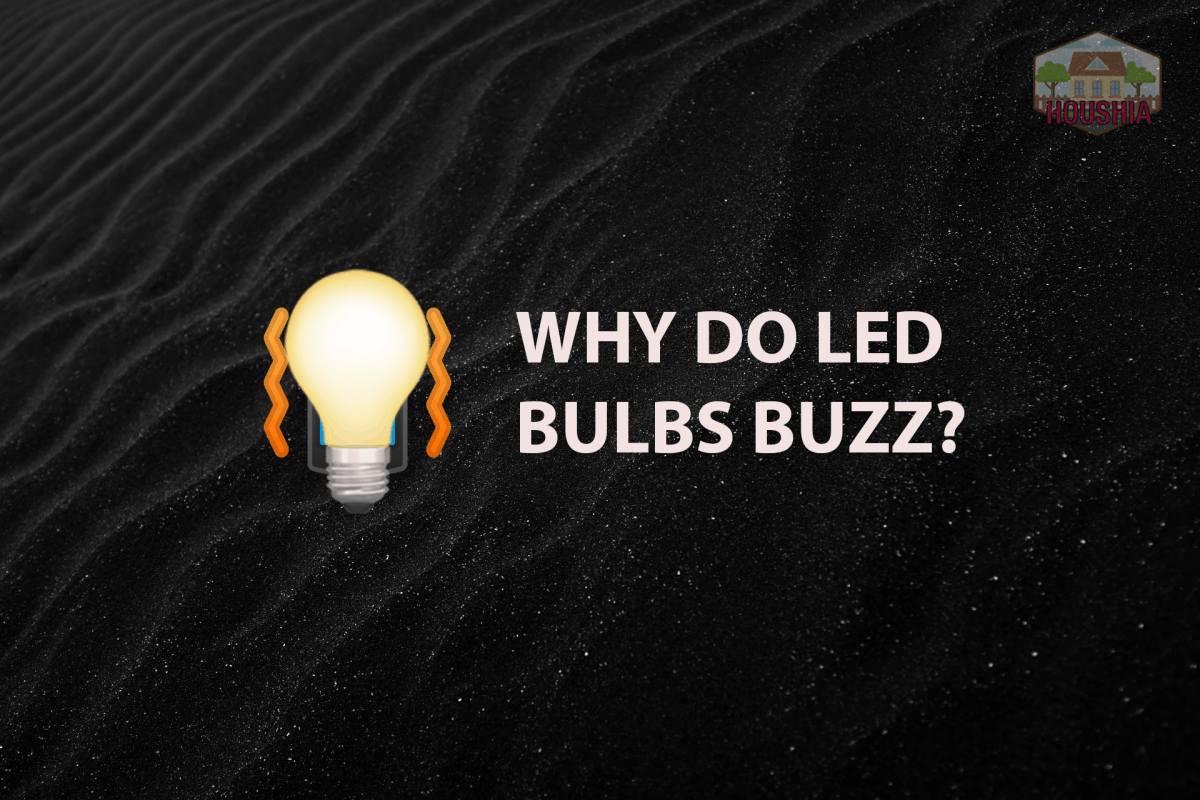 LED lights are known for being energy-efficient and long-lasting. In recent years, LED lights have become the popular choice of lightbulbs over incandescent and CFLs. However, LED light bulbs have their own fair share of problems. Buzzing and humming LED bulbs are common, yet very few homeowners actually know what causes such problems. Learning and understanding the nature and causes of your buzzing LEDs can greatly help you avoid and solve it.

Why is my LED bulb buzzing? Your buzzing LEDs can be caused by the following: overloaded circuits, defective/improper dimmer switches, wiring problems (e.g., loose wirings), and defective/damaged light bulbs.

Defective/Damaged LED Bulbs May Cause The Buzz

The annoying buzz that is bugging you could have been caused by either a damaged bulb or a defective bulb. Although LED bulbs are known to be more durable and longer-lasting than both CFLs and incandescent bulbs, there are times when they do get damaged early into their usage lifetime. It may also seem more unlikely, but LEDs may also come with factory defects, especially with the low-quality brands in the market.

Regardless, you should always start by examining your LED light bulbs before proceeding to check on other possible causes. A damaged or defective bulb can be readily resolved by you, without any interference from an electrician. First, you need to know how to determine if the LED bulb itself causes the buzzing and humming sound.

Check on the Condition of the Bulb

In most cases, the buzzing sound may not be caused by the LED bulb because LEDs are known to be consistent and durable. Nevertheless, always start with the bulb as it is the easiest to diagnose and resolve. The other causes in this list will need the intervention of an electrician for safety reasons.

When encountered with the buzzing problem, turn off the dimmer switch and remove the LED bulb that causes the buzz. After removing it, replace it with any LED bulb of a similar type and wattage. Turn on the dimmer switch and observe. If the buzzing sound persists even after replacing it with another bulb, then your problem is not with the LED bulb.

If the buzzing stopped with the replacement LED bulb, then you most definitely have a defective one. Although it may seem moot or useless to you as the problematic bulb was already replaced, you will still need to know what causes your bulb to be damaged. This holds especially true if the light bulb was barely halfway through its useful life expectancy. The average life expectancy of LED bulbs lasts for 50,000 hours, for context that would be 17 years if used for 8hrs/day.

A bad bulb socket may have damaged your LED bulb. Bulb sockets with loose electrical wirings can sometimes cause the bulb to overheat and melt. Another typical cause of damaged bulbs is mismatched bulb wattage to a given fixture. Also, watch out for overloaded circuits, they not only directly cause the buzzing sound but also indirectly cause it by damaging the LED bulbs.

Probabilities of Having a Defective LED Bulb

LEDs from reputable brands, like Philips Hue and Lifx, are not likely to produce defective light bulbs. If they did, their reputation and brand standing would have been greatly affected. Nevertheless, these companies still do have customer support and warranty services for the unlikely event that they did sell defective bulbs. The probability of buying defective LEDs only increases as you go down the scale of brands.

Always test your LED bulbs immediately whenever you buy them, especially for your spare ones. You do not want to be relying on a spare bulb that is actually defective from the very beginning. It would be easier to have your defective bulbs be replaced as early as possible. Remember that the warranty period from lightbulbs ranges from two to four years, depending on the brand.

Should you be having buzzing problems due to the LED bulb, you must replace the said bulb. Continued use of the defective/damaged bulb can have some repercussions. Worst case scenario, your LED could ultimately overheat and explode. Housefires can start with even the slightest of spark in the electrical wirings.

Replacement is the only remedy available to you, either by using the warranty period or just straight-up buying a new one. To avoid unnecessary expenses, try to see if you are qualified to use the warranty and have a replacement for free. Otherwise, buy a new LED bulb and, if possible, opt for a good quality bulb from a reputable brand.

Overloaded Circuits Can Cause Buzzing LEDs

If you notice that the buzzing sound of your LED is triggered by the number of electrical appliances, such as washing machines and air conditioners, then the circuit is most likely overloaded. Be preemptive and start calling for an electrician to check on your electrical circuits because you either might have an overloaded circuit or a faulty circuit breaker, which can cause not just flashing and buzzing LED light bulbs, but even fire.

Another article we put together a few weeks back looks at something very similar to buzzing LED bulbs. Check out Why Do LED Bulbs Glow When Turned Off – Answered I think you’ll find it related to buzzing LEDs.

Determine if there is an Overloaded Circuit

An ordinary house would have at least two electrical circuits that transmit electrical currents to the light bulbs and appliances hooked up with it. Usually, the light bulbs themselves are grouped into one circuit because they tend to demand less electric current. However, there are times when shoddy workmanship results in circuits overloaded by too many high-powered appliances. In such instances, the lightbulbs get the short end of the stick and are deprived of the proper level of electric current they need.

Remedy Available To You

Of course, it would be even better that you manage your electrical circuits from the very beginning. Always remember to have your high powered appliances divided among the electrical circuits to avoid overloading. This most especially holds true with people buying houses or renting apartments, always check for the load rating of each circuit.

If you own or are thinking of owning Philips Hue bulbs, we have an article that debugs if they are flashing! If you’re interested in learning some of the common issues of Why Do My Hue Lights Flash? – The Easy Fix

Environmental factors can also cause faulty electrical wirings. For example, rats and termites can chew on electrical wirings without you even noticing it. If your electrical wirings are mostly hidden in wood or wood composite material, you might want to regularly check those nooks and crevices for spaces where a rat or termite can hide.

Remedy Available For You

Faulty wirings are mostly caused by bad installation. Do not attempt to fix wiring problems on your own, unless you’re an electrician or a technician. It would be too hazardous for you and your family. To be safe, call an electrician and have him inspect for faulty wiring, faulty circuit breakers, or even overloaded voltages.

Faulty And Mismatched Dimmer Switches Can Cause Buzzing LEDs

Mismatched or Incompatible Dimmer Switches are a Problem

Faulty Dimmer Switches Can Also Cause the Buzzing Sound

Knowing when to replace old dimmer switches may prevent you from suffering that annoying buzzing sound created by your LED bulbs. Replace your old or mismatched dimmer switch before it damages your bulbs and incur you more expenses.

Dimmer switches generally last around 10 years. However, depending on the condition of your house’s wiring system, you might want to have an occasional check-up from an electrician. People who have recently just moved into new houses have been encountering dimmer switch problems. Before you upgrade your old bulbs from incandescent to LED, always watch out for the condition and capacity of your dimmer switches.

First off, if you are using Philips Hue or Lifx light bulbs, it is best to use the dimmer switch they specifically designed for their light bulbs. Regardless, Lutron Caseta would still be compatible with such light bulbs, or to any LED light bulb. Caseta is the premiere dimmer switch with smart dimming features created by Lutron Electronics.

The dimmer switch itself has features such as light scheduling, scenes, and smart away. Lutron Caseta is known for being compatible with most smart home devices such as Alexa, Google Assistant, Serena, and even Sonos. Since it is made by Lutron Electronics, you could expect top-notch quality.

The excess electrical current can cause your LED lights to buzz because it is most likely receiving too much electrical currents. Aside from that annoying buzz created by the bulb, you are also facing the probability of having a short circuit. House fires are mostly caused by faulty electrical wirings and circuit breakers. Early signs of faulty wirings include the buzzing sound created by LED bulbs, and in worse instances, a buzzing circuit breaker.

Your LED light bulbs could be buzzing and humming due to various causes. These causes are often similar to those that create the flickering and flashing lights of LEDs. When you do encounter a buzzing LED bulb problem, always start with checking the bulb itself. This is because it is a problem you can readily resolve. The other causes, faulty electrical wirings, dimmer switches, and overloaded circuits, would require the expertise and skills of an electrician, not just for efficiency reasons but also for safety.