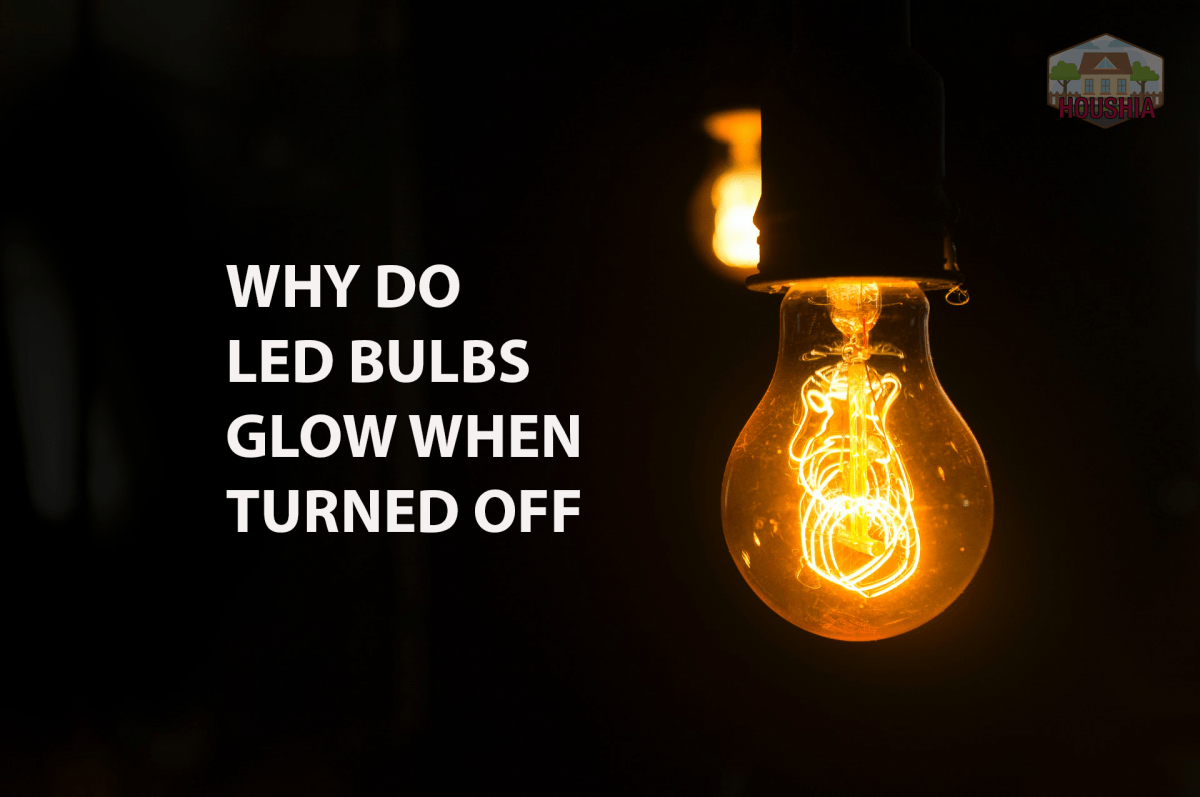 LED bulbs are the leading type of bulb due to its relative longevity, energy efficiency, and top-notch smart features. Yet, you might have been shocked to see your LED bulbs glowing even when they are turned off. LED bulbs, after all, have the reputation of being less susceptible to overheating as compared to incandescent bulbs. Regardless, there are times when LED bulbs get hot too for overlooked reasons. Knowing what the cause of such glowing can save you from unnecessary expenses.

Why do LED bulbs glow when turned off? LED bulbs may glow due to two main possible reasons, either the LED bulbs are unintentionally storing energy, or there is an electrical wiring problem. It may also be caused by defective or low quality LED bulbs.

In this article, we will discuss the different causes of why your LED bulbs are still glowing despite being turned off. Knowledge over the possible remedies and/or preventive measures may save you from being subjected to high electrical bills. Part of solving the problem is understanding the underlying issues that led to the problem. Thus, we need to get to the bottom of your glowing LED bulbs.

LED bulbs are the only type of bulbs that can inadvertently glow when turned off. The glowing is due to the diodes in the bulbs of LEDs being able to operate on the slightest of electricity stored inside the bulb. The small currents can also come from the wiring, although the power switch is off. Other bulbs do not encounter this kind of problem.

The Phosphor Layer of the LED Bulb can Store Energy

Your LED bulb can store energy either in the Phosphor Layer or in the LED driver of the bulbs. The Phosphor Layer, or otherwise called “Phosphor Coating” is a layer that is common to blue LEDs that allows it to display the white color. The coating absorbs the blue wavelength allowing the light to pass through and display white.

Not all LEDs have Phosphor Layers

The reason why LEDs come with Phosphor layers is that LEDs cannot naturally display the white color. Technological advancement has allowed LED providers to provide a white LED light using Blue LEDs that have yellow phosphors. However, as technology even got better, there are now other ways to display white LED without the use of phosphor layers.

The phosphor layer of most high-quality LEDs will only store energy if the light bulb was used for continuous hours. Even if the phosphor layer indeed collected enough energy, it will only glow for mere minutes. So unless the LED bulb is hooked up in the bedroom, it will not be much of a bother to you.

Incidentally the inventor of the blue LED was award the Noble prize for creating white light LEDs in this way.

Aside from the Phosphor layer in most LEDs, the LED driver can also be a source of stored energy. The stored energy can make the light bulb glow weakly for seconds, even minutes. LED drivers are electronic circuits that operate the lightbulbs, specifically the light-emitting diodes.

The driver often contains capacitors and inductors, which may inadvertently store energy. This stored energy allows the LED bulbs to glow even when the switch is off. Because the stored energy is minuscule, the glow is minimal.

Whether your LED bulb is storing energy through the LED driver or through the phosphor layer, you should not be worried. The afterglow caused by the storing of energy does not destroy or damage the bulb itself. So do not be concerned over the longevity of your LED bulb. LED bulbs, even with the afterglow, are still better than incandescent because LEDs do not overheat.

Remedy for the Afterglow

Since the bulb is not actually defective and that the afterglow is only temporary, the remedy is to just tolerate it. It does not affect the bulb neither does cause you harm. But if you still find it annoying to have that afterglow, especially in the bedroom, then you can always replace it with a bulb that does not have phosphor layers, like Color-mixed LEDs and LEDs with Quantum Dots.

How to Determine if the Bulb is Storing Energy

To determine if the bulb is inadvertently storing energy, whether by a Phosphor layer or LED driver, remove the LED bulb immediately after turning the switch off. If the LED bulb glows faintly or weakly, then the problem is with the bulb storing energy. However, if the afterglow is gone after removing the bulb from the socket, then you have an electrical wiring problem.

Problems With The Electrical Wiring

Neutral Wire is not “Earthed” Properly

Earthing your neutral wires requires a certain level of knowledge of electricity and wiring. Unless you happen to be an electrician, have an electrician remedy your wiring problem. Do not attempt to do it by yourself; you might risk getting electrocuted.

Electromagnetic Induction can also Cause Afterglow

Similar to neutral wires not being earthed properly, wires that are bundled together may also create small electrical currents that can power your LED bulbs weakly. The electricity, in this case, is created by electromagnetic induction due to cables and wires running alongside each other.

This mainly caused by wirings that are not insulated properly or that the insulators have been removed. For instance, house rats may chew on wires that run along the walls of a house. The wirings of lightbulbs are often hidden behind the walls, which makes them susceptible to damage.

Your dimmer switches can also be the cause of the problem. Dimmer switches that are not rated to match the electrical current needed by the light bulbs it controls can cause a lot of problems, including that pesky afterglow of LED bulbs. In such a case, even when the switch is off, electricity flows into the bulb, making it glow.

Remedies and Preventive Measures to Avoid the Afterglow

The only remedy and preventive measure for afterglow caused by LED bulbs storing energy is to replace the said bulb. The bulb itself is not even defective, so if you cannot tolerate the temporary afterglow, you can always opt to replace it. As for afterglows caused by electrical wiring, you must resolve the issue immediately as it not only damages your bulb but also increases the risk of fire.

Since you will not do the process itself of earthing the neutral wires, you can help by having all your neutral wires checked properly. This is very important in cases wherein you just bought a house or transferred to a new apartment. Always check the condition of your new house’s wirings.

If the problem is with wires running alongside each other, you can opt to check their insulators if they are damaged. The insulators should keep them from creating residual electricity, however, to fully remove this problem, you can install a zener diode. A zener diode will regulate and block off any residual electricity flowing in the wires whenever the switch is off.

To summarize things, the annoying afterglow of your LED bulbs can be caused by minor issues such as LED bulbs storing energy. It could also be caused by far more complicated and dangerous issues such as faulty electrical wirings. LEDs storing energy is not much of a problem, but for the electrical wiring problems, act fast, and call an electrician.

hope you enjoyed reading this article, if you found it useful then share it with other people who might be interested in learning more about LEDs and why/if they glow!

I listed these additional articles earlier in the article. If you’re interested in reading more about LED lights checkout some of the other houshia articles including: