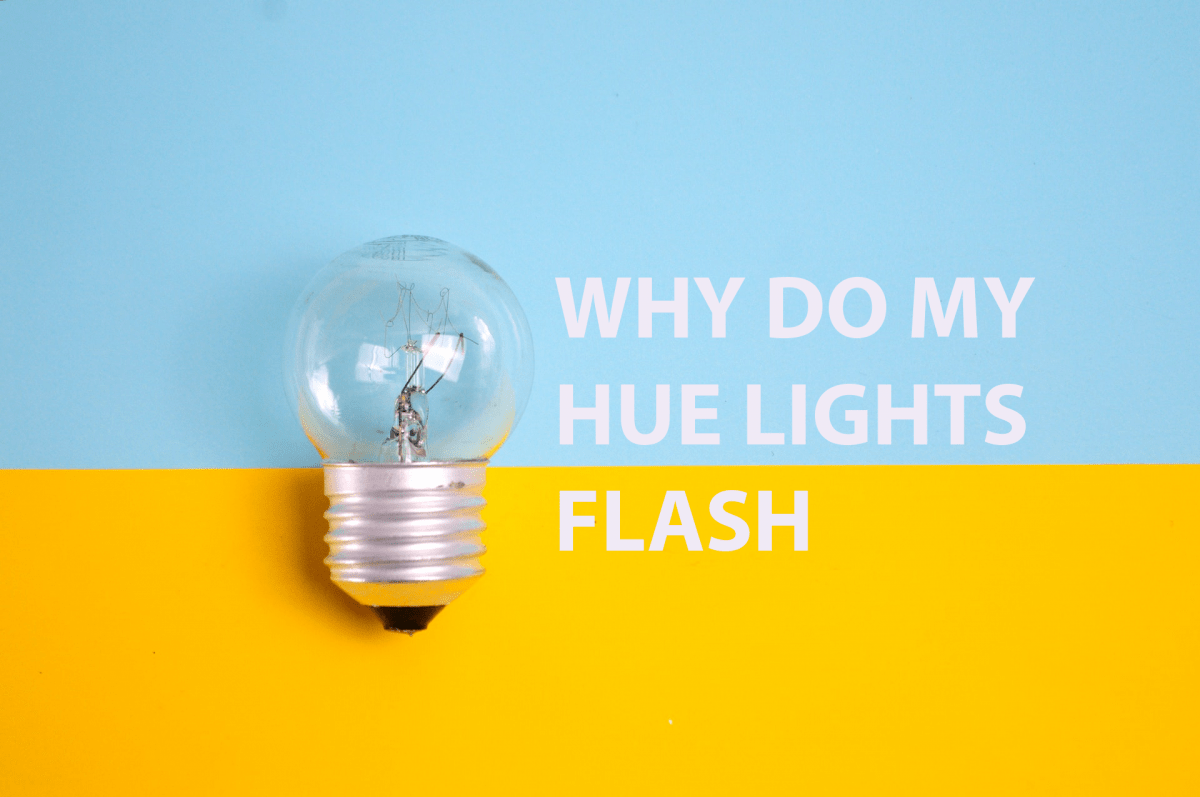 Philips Hue Lights is arguably the best LED lighting system with all its smart features, color variations, and topnotch quality. However, there are instances when even Hue lights encounter some technical problems. The most common out of these problems is the sudden and random flickering and flashing of Hue lights. No one wants to have lights that suddenly flicker, especially in the middle of the night.

Why do Hue lights flash and flicker? If your Hue Lights are flickering, there might be a problem with your dimmer switch, or you have a defective hardware. Usually, it is caused by wall dimmer switches or incompatible dimmer switches. Regardless, try restarting your Hue Bridge first.

In this article, we will solve why your Hue lights have been flickering. You will also learn what to do first before you call in a technician to sort things out. Always do exercise caution when dealing with electrical wires.

Dimmer Switches Cause Hue to Flash

Dimmer switches can only carry a specific load of watts before it becomes overloaded. An example of overlamping is if you have a dimmer switch that is only rated for 300 watts, but is controlling 5 100-watt light bulbs. In such a case, your dimmer switch has exceeded its maximum safe capacity. It will burn out and will stop functioning properly.

Watch out for power surges as they can also damage your dimmer switches and circuit breakers. Lightning strikes may enter homes and damage electronic devices, including dimmer switches.

Knowing when to replace old dimmer switches may prevent you from suffering that annoying flashing of your Philips Hue bulbs. Replace your old or mismatched dimmer switch before it damages your bulbs and incur you more expenses.

Dimmer switches generally last around 10 years. However, depending on the condition of your house’s wiring system, you might want to have an occasional check-up from an electrician. People who have recently just moved into new houses have been encountering dimmer switch problems. Before you upgrade your old bulbs from incandescent to LED, always watch out for the condition and capacity of your dimmer switches.

The Philips Hue dimmer switch can be bought at Amazon for around $24.99. Sometimes there are even cheaper deals depending on where you buy it online. The dimmer set already includes screws and adhesive tapes so you can easily install it anywhere you want. However, do not exceed the safe capacity of the dimmer, which is 10 light bulbs, because you might cause overlamping and prematurely damage your dimmer switch.

Damaged bulbs are possible causes for your Philips Hues to flash and buzz. Although smart LED bulbs, like Philips Hue, are generally reliable and consistent, there are still instances when you may have gotten a defective bulb or perhaps one that is damaged. LED bulbs are not supposed to flicker because they do not have filaments, so to have one flicker, you must check if your bulbs are actually still in good condition.

To check if your bulb is the actual problem, remove the flashing Philips Hue light bulb and replace it temporarily with another bulb, preferably another LED bulb. If the new bulb works perfectly fine, you might want to start contacting customer support. Since the new bulb works, then the problem could not have been dimmer switches, faulty wiring, or interfering signals.

If the replacement bulb works perfectly fine, then the flickering bulb is damaged. The best solution to this problem is replacing it with the substitute bulb or buying a new Philip Hues Bulb, if you are not protected by the warranty period. Regardless, if it’s not the dimmer switch, the wiring or anything serious, the problem has to be the bulb. You will have to replace it to avoid having those random flashing that is bugging you.

Philips Hue warrants that their LED light bulbs are free from defects, either in material or workmanship, and will operate for 3 years if used properly. The prescribed usage is 3 hours/day with a 7-day week. If you follow the prescribed rate of usage and the light bulbs still get damaged before the 3 year warranty period, you can contact Philips customer support to have them replace the bulb.

It may sound ridiculous, but there are times when the bulbs are actually not correctly hooked up on the bulb sockets causing the intermittent flashing. If you think that your dimmer switch is perfectly fine because it’s rather new, turn off the power and check if the bulb is properly making contact with the bulb socket.

When the bulb does not properly make contact with the bulb socket, chances are the bulb is getting disrupted electrical currents. When the electric current that powers your Philips Hues is disrupted, you are going to end up with flickering and flashing LED lights. So to avoid headache and discomfort, always make sure to attach your Philips Hue, or any kind of bulb, properly.

Wiring is also a problem that may cause your Philips Hues to flash. Improper wiring and even old wiring can cause not just flickering light bulbs but also fires. If you have tried solving both the dimmer switch and the light bulb, and still the flickering persists, consider calling an electrician to have your house’s wiring checked.

Do not attempt to fix wiring problems on your own, unless you’re an electrician or a technician. It would be too hazardous for you and your family. To be safe, call an electrician and have him inspect for faulty wiring, faulty circuit breakers, or even overloaded voltages.

If you notice that the flickering is triggered by the number of electrical appliances, such as washing machines and air conditioners, then the circuit is most likely overloaded. Be preemptive and start calling for an electrician to check on your electrical circuits because you either might have an overloaded circuit or a faulty circuit breaker, which can cause not just flashing light bulbs, but even fire.

Your flashing Philips Hue may also be caused by other problems such as radio signal interferences and faulty power service utility. These problems are way out of your control. If you feel that your neighbors are draining the local transformers with their massive power usage, contact your power provider.

Signal interferences can be noticed because not only does it affect your LED bulb, but also your television and radio. The problem is, if you do not have radio appliances, but your neighbor does, a nearby radio tower or mast can affect your Philip Hues because the hues communicate with the Hue bridge through electronic signals.

Your Philips Hue flashing, flickering, and buzzing may actually be caused by minor issues such as faulty bulbs, loose bulb sockets, and faulty dimmer switches. It could also be caused by far more serious issues such as faulty wiring, overloaded circuits, voltage fluctuations, and faulty power service utilities. As such, always start checking for minor problems before you start to consider dealing with problems that would require experts like electricians.

In such scenarios, let them deal with the problem as they have the necessary knowledge and skills to fix your flashing Philips Hues. Always prioritize your safety. If your house needs overall repairs, especially with its wirings, do not hesitate to do so. Your flashing Philips Hue might actually worsen to a night fire. It’s better to fix things before they get worse.