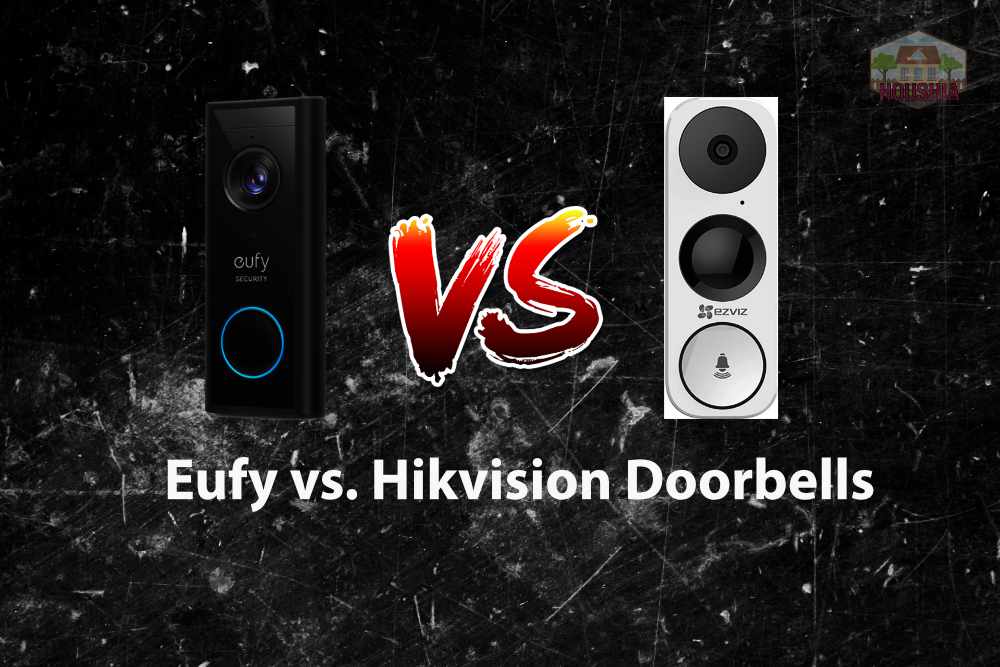 Smart doorbells bring you the best of both worlds — it allows you to be secure with its security cameras while providing you convenience with such amazing user features to enjoy.

There are a lot of smart doorbell brands available on the market. They boast of different features and perks, along with the different price tags available.

Users have also vouched for most of these brands based on their own user experiences, which is a very good factor to consider in buying a smart doorbell.

What is the best smart doorbell brand to use? Eufy is the best choice for a smart doorbell because it has superb clarity in images captured, does not have required monthly subscriptions, has military-encrypted levels of privacy, and assures you of real time response guaranteed, anytime.

In this article, we will discuss the different advantages and disadvantages of both Eufy and Hikvision smart doorbells, in terms of image quality, performance, price, and other important factors.

We will also compare the two brands based on their perks and features. Lastly, I will also share my personal thoughts regarding these two brands as I had the chance to use both of them for a period of time.

But for those in a rush, here’s the cliff notes on what these two brands offer:

One of Eufy’s high selling points is its top quality imagery. It has high definition 2560 x 1920 resolution combined with advanced HDR and distortion correction.

That means that the video will be recorded in twice the quality promised. It also offers a 4:3 ratio at 2K resolution, meaning you can see people’s faces when they are close to the door.

That is very important especially for the small facial details for a police report, if ever needed. Its 2K camera resolution is twice as clear as 1080p security cameras and four times the clarity of 720p cameras.

Gives More Than The Pricetag Offers

When you buy a Eufy smart doorbell unit, there is no overhead to the Eufy Smart Doorbell Camera. That simply means that all purchases are one-time purchases.

There is absolutely no need to pay a subscription fee, though they offer rolling 30-day coverage for $29.99 per year, but they do not push it down your throat so meaning you can live without this optional subscription.

It is the best wireless smart doorbell camera available in terms of price, performance, and overall reliability, as vouched by a lot of user reviews on Amazon.

As of writing, Eufy smart doorbells are already sold out, so you can see how much loved this smart doorbell is. This works well for people on the budget but they want the best security from their smart doorbells.

Eufy also allows you to speak directly to anyone who approaches your front door, thanks to the two-way audio. However, some users have noted to experience delays on the audio from the two-way audio setup.

It still does the job regardless and a lot of people are still satisfied. Real time response is a true selling point of this unit, and you can also pair it with your Google Home.

Videos are stored with military-grade encryption, and available to you and only you, so you can be totally assured that there will be no hacks or threats to your privacy when using the Eufy smart doorbell.

Hikvision has 3MP (2048 x 1536) resolution meaning you can have clear videos, day and night. Its 3MP high resolution sensor is combined with night vision.

That means even if the lighting conditions outside are poor, you can still get top notch quality imagery without compromising the clarity.

It also boasts of up to 16ft (5m) IR distance, meaning it can cover a wide distance without installing additional security cameras since one is already more than enough.

It has a built in PIR motion sensor to detect visitors, and send alerts even if they do not press the doorbell button just yet.

Compatibility With Hikvision And Beyond Guaranteed

One user has been using it with his Blue Iris server setup and it does not fail him at all.

Hikvision also offers standalone apps available on iOS and Google Play Store. The app lets users see who is at the door and answer it while at home or anywhere as long as there is a stable Internet connection.

If a burglar decides to steal your doorbell unit, don’t worry because he won’t be taking the footage away with him. It also offers a 2-way talk system setup, similar to Eufy, which allows you to talk to the people outside without opening the door just yet.

Eufy vs. Hikvision: The Best of The Best

For a Eufy smart doorbell, you can expect about 180 days of battery life after the initial charge, which is highly dependent on how many events triggered in a day and how often a livestream happens.

One user tested it for two weeks and after getting triggered close to 36 times, recording 10-second clips each time, it still holds strong at 90% battery life.

Eufy cameras are always known for their long battery life. Eufy also has 16GB storage available but it also enables the option to add storage via USB on the HomeBase system.

Eufy has its well-known HDR imaging, which ensures high clarity for backlit or low light scenarios, providing clear images day and night. 2K resolutions might eat up a lot of storage but it compensates for the video clarity and quality.

Using your Eufy smart doorbell, it also gives you a chance to view 3 seconds of footage prior to the initial alert, allowing you to gain a clearer picture of what happened.

It also increases the likelihood of criminal identification, which is one of the primary reasons why we set up smart doorbells at home.

It is almost the same as Hikvision but for Hikvision, it has its IR night vision up to 16ft, which  is a good advantage since it can cover wider expanses.

Both cameras have convenient ways of utilizing the alerts with their respective apps but Hikvision gets most of the users’ nods because it is easy to use and available on both iOS and Android gadgets.

Some Eufy users encounter audio delays especially when used with Google Home. However, Eufy works wirelessly with the help of a hub that connects to your router so most users are still satisfied with it.

Use A Brand A Lot of People Trust

Eufy is well-known to a lot of users and home improvement enthusiasts with its reliability, performance, and impressive price range.

A lot of people recommend Eufy for these factors alone. In addition to that, the fact that it does not require a monthly subscription to anything is a great selling point to its potential buyers.

Meanwhile, not a lot of sellers sell Hikvision in their stores so you might find it hard to look for spare parts if ever you need to change anything.

Use The Brand With Better Cameras

Eufy has undeniably better cameras than Hikvision. Its cameras are known to capture videos with high resolutions. Sometimes, it captures images that are even higher than existing contemporaries on the market.

On the other hand, Hikvision has similar attributes and a clear positive in terms of wide coverage.

Get More Than What You Paid For

Hikvision cameras cost $137 while Eufy cameras cost higher at $159.99. However, Eufy has more perks and features that will make the splurge totally worth it.

Eufy and Hikvision are both top notch brands for smart doorbells on the market.

They boast of different perks and features which can be a hit to a lot of people, and they also have some setbacks which people might find a downside when considering buying from the two.

However, if you want a smart doorbell that can do its job well, sometimes even better than expected, can make you feel secure and safe at home, and does give you everything you need in a home security device, choose the brand that is trusted by a lot of users worldwide.

Alright guys, that’s it for this article, if you are interesting in reading more about smart doorbells, we have lots of cool articles related such as:

Arlo Video Doorbell Vs. Eufy: I have Both. Which Did I Pick?

Eufy Doorbells Wired VS Wireless – Which Did I Pick?

Can Ring Doorbells Get Wet? How To Protect Them