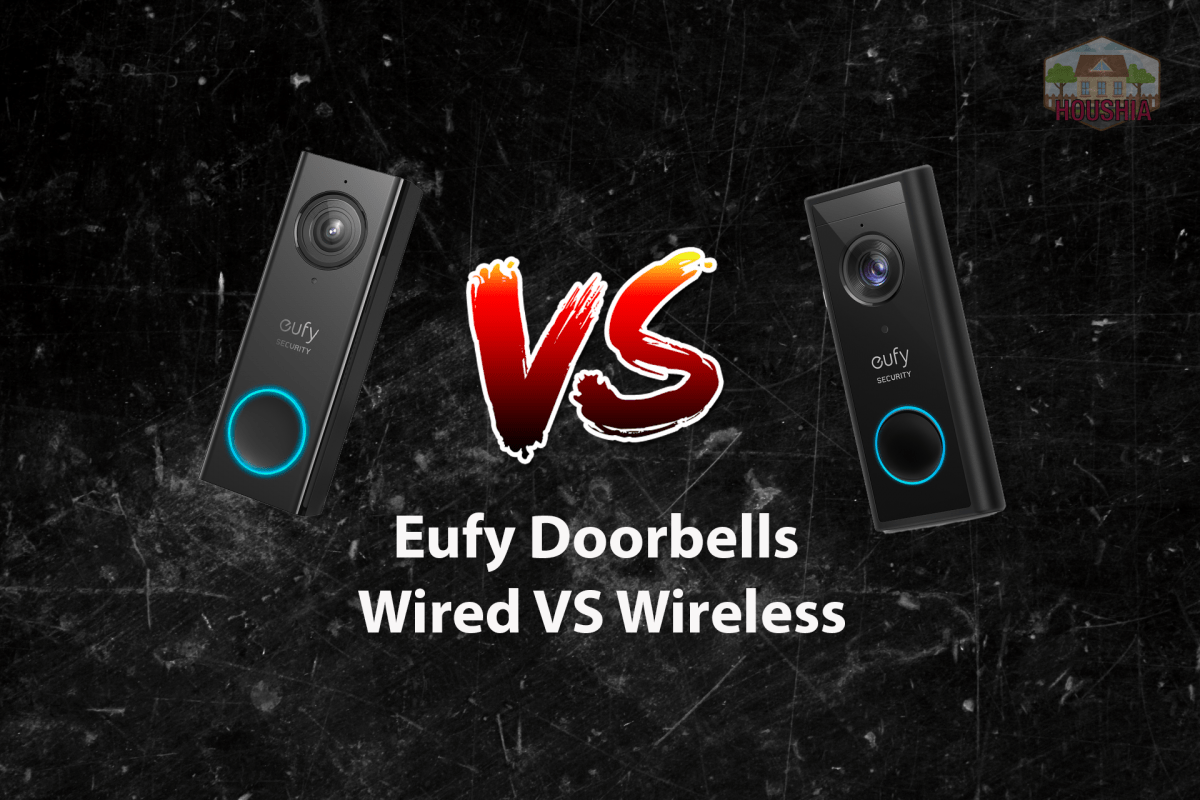 Eufy Offer some great products in my opinion. The Smart Doorbell is definitely up there as one of the best. But should you buy the wired or wireless versions?

Should you buy a wireless or wired eufy doorbell? The newly released wireless eufy doorbell offers comparable features to the wired version with the added advantage of a much easier installation process and out of the box base station compatibility.

That being said, these products both offer some great overlapping features. But also unique features to both the wired and wireless door bells.

Read this article and you’ll know exactly what to consider when deciding on buying a wired or wireless eufy doorbell.

What Are The Main Differences Between Wired & Wireless?

Also you should note that the wired door bell detects motion late compared to the wireless one. Meaning that the 3 second pre record doesn’t really count for much since the wireless one is more sensitive and starts recording the second it detects movement – even though its turning on from cold.

LTE vs WiFi notifications – Is there a difference?

This is a great question that someone asked me the other day when they wanted to know what doorbell I would recommend. Since it’s likely that you’re gonna be away with your phone, maybe at work, for instance, or on holiday and you get a notification that someone is at your door.

In this specific scenario, which is going to happen quite a lot, you’re going to be relying on your lte connection for your cell phone.

And in the case of a smart wireless doorbell. You’re going to be viewing video footage streamed directly from your home. So there’s quite a lot to ask for your lte connection.

Fortunately, due to 4G being virtually ubiquitous across North America and Europe. I found that the streaming quality of the smart doorbell was more than sufficient. Not only that, I could also have a two way conversation with the person at the door.

Eufy Also seems to have figured out a way to compress the video stream so that the amount of data transferred is quite minimal. And as a result, even when you have a less than perfect lte connection, the video stream is still passable.

Is there lag In Audio on the Wireless Eufy Doorbell?

Have you ever had a bad connection whilst doing a video conference to someone? You know where there’s a slight delay between when you speak to them and then they receive the message. Annoying, isn’t it?

You have to subconsciously pause for a second before waiting for their reply and then pause another second at the point where then you might do your reply. It just ruins the flow of the conversation.

This annoyance is further exacerbated if you are talking to a stranger. Because the social interaction itself is that much more shorter. In the case of someone coming to your door, potentially delivering a parcel. You don’t have time to establish that there’s a delay in the two way audio. And it’ll frustrate you every time you get a ring at the door.

Eufy is all too aware of this. They know the importance of getting this feature right.

So EUFY engineers have made sure that there is as little lag as possible in the two way communication feature with a recent software patch.

While I mostly tend to use Google home products. I did experiment with Alexa Integration. For both the wired and wireless door bells. From my experience, when the doorbell is answered, the recording stops and the Amazon Echo doorbell announcement is played.

Which is great because it means that you can use your Alexa devices to act as a chime for your doorbell. So if you’ve got multiple Alexa devices scattered around your home, then whenever someone rings the Bell at the front door, it will play around all of the Alexa devices.

Familiar lives in a small apartment. This isn’t really an issue given that I can hear 1 device from anywhere in the place. But for instance, it starts to make more sense if, for instance, you have a building in your backyard where you work and you have an Alexa there, while in that case. When someone does go to the front door of the main building, you will then be notified and that is definitely useful.

So if you are thinking of integrating your wired or wireless doorbell with Amazon Alexa, it looks like EUFY has you covered.

How is the Two Way Communication on Both Doorbells?

I touched on this earlier when discussing the lag time of communication between the two people having the conversation via the doorbell.

What I didn’t answer is if there’s any discernible difference between the wired and wireless options. the EUFY offers.

The good news is, from what I can tell, there is no discernible difference in the two way communication between both door bells.

Whether you purchase the wired or wireless versions, you shouldn’t worry about the quality of the two way audio between them. They’re both excellent.

And in my opinion audio comes a close second in level of importance to the ability of the doorbell to record video.

I did however find that for the wireless one, if the person outside is standing still too long then the camera would stop recording video. This is because the motion sensor wouldn’t see them. I believe this will be fixed in a later update.

The wired doorbell can be purchased here.

And the wireless version with base station included can be purchased here.

Okay, this is where there are some differences between the two options.

For the wireless option, the video recording cuts out after a default 45 seconds. This, however, can be increased up to 120 seconds via the app in the settings menu. However, if you want to go beyond that, then you’re out of luck.

I think this is mainly due to battery constraints and the engineers have decided to limit it to preserve the battery. When you are creating a product that is powered by batteries, you always have to weigh up the pros and cons of how often you make use of a feature in reflection to how long you want the battery to last.

If the engineer were to increase the recording time, then the battery may take an impact and as a result you as the user find yourself recharging the battery that much more often. Which could become an annoyance, especially if it’s, say, every three months. Or less!

For me this wasn’t an issue but it might be worth keeping in mind if this could be an issue for you.

Any smart doorbell with precious electronics inside isn’t going to be worth much if it can’t withstand the harsh weathers that it will be exposed to over the course of a year.

Especially if you live in a rainy part of the world like me for instance. Then if there is even the remote chance of water ingress, then your fancy new doorbell is most likely ruined.

Fortunately, both cameras come with a very high rating of IP65. This means that you needn’t worry leaving your camera out 24/7, rain or shine, winter or sun. I’ve had mine through two winters and it seems fine so far.

Both are ip65 rated

And if you want to get really technical both have an operating temperature of between minus 4 degrees and 122 degrees fahrenheit.

If you’re interested in learning more about smart doorbells then Houshia has many more articles, here’s a few you should read:

Can Eufy Cameras be Hacked?

In all honesty, you can’t go wrong with either of these products. Both have great feature sets.

If however, you’re in a scenario where you’re, for instance renting your apartment or home. Then the wireless option could be for you. This is because if you decide to move. Then removing the wireless doorbell is far simpler than the wired version.

I’d also say that the wireless product is a newer product. And it’s quite possible that EU FY may release an updated version of the wired product in the future. So that’s something to keep in mind.

We’ve got several other articles covering EUFY products. Including the great security cameras. Which directly compliments the smart doorbell. I highly recommend checking those articles out to learn more about them.

The wired doorbell can be purchased here.

And the wireless version with base station included can be purchased here.