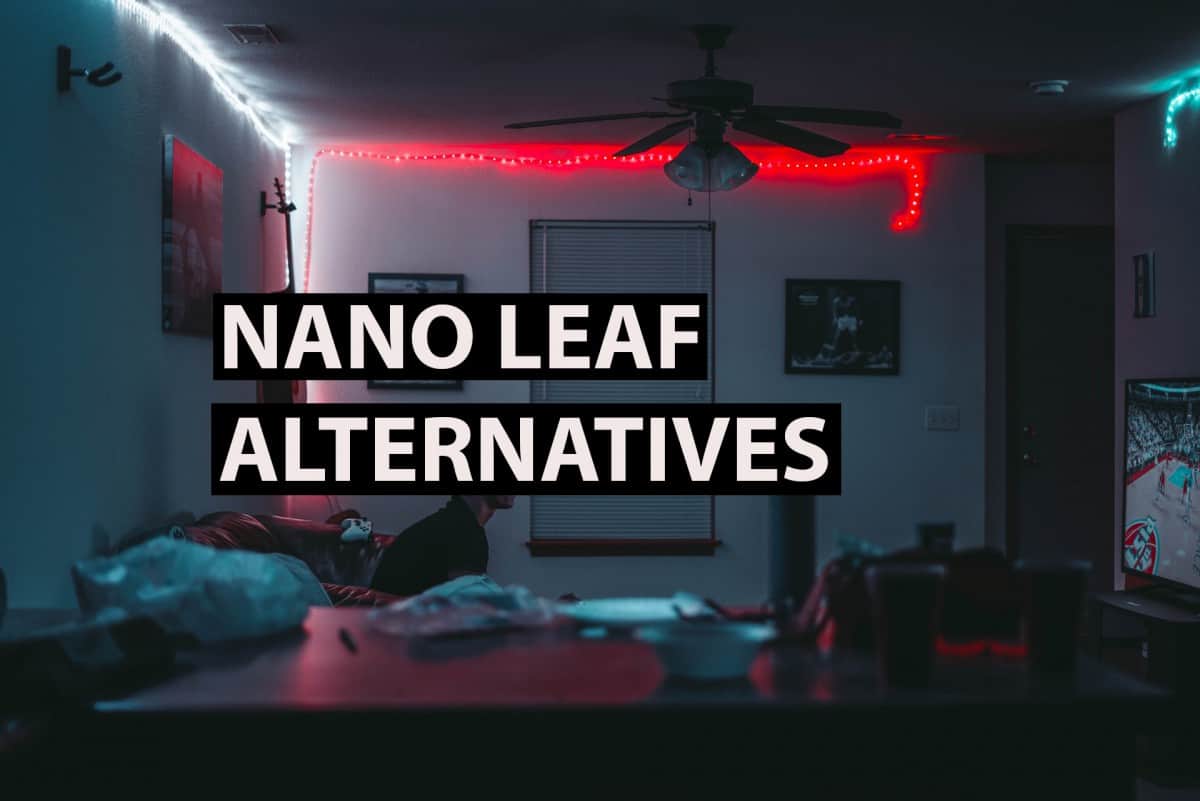 Watching how cool light panels can be naturally makes a person want to buy them. However, when this person sees the price, that want is almost instantly dismissed. In the words of a Youtube user on Nanoleaf’s “Rhythm Edition” advertisement, “Make it a bit cheaper and then take my money.” Of course, despite the aesthetics and smart technology the product provides, Nanoleaf is not very accessible to the vast majority who would want to get their hands on the trending product.

What are Nanoleaf alternatives? Cheaper alternatives to Nanoleaf include Cololight, ZemiSmart, and even DIY light panel creations. Unfortunately, in the world of light panels, less money can mean less convenience and efficiency.

By the end of this post, you will see what Nanoleaf has to offer that others don’t. With that, we will talk about the pros and cons of the two famous brands for Nanoleaf alternatives. We will also discuss the key features from these brands which may catch your eye. More importantly, we will talk about two DIY options for light panels. If you’re not willing to spend $300 but still want an awesome panel lighting system, then this article is perfect for you.

Before we can start comparing, it is helpful to first define what Nanoleaf’s pros and cons are. Nanoleaf is known for producing the most vibrant colors with their wide but light panels. More than that, these panels are triangular-shaped which makes them perfect for any design you may want. Nanoleaf also makes for easy installation and provides a user-friendly app.

Aside from these basic benefits, Nanoleaf users are very satisfied with the “Rhythm Upgrade Module” which allows the light panels to sync with the music playing in the background. The sensors on the panels are made to automatically listen to the audio to create your most engaging sound experience yet. For gamers, a Razer Chroma integration is also available to enhance your gaming experience with Razer gear.

But, of course, the biggest con of these efficient and convenient panels is the cost. Just for 9 panels, you have to spend a whopping $200. That’s really a big amount to spend on lights. If you opt for the 15-panel set, you would have to spend $100 more with the price tag at $300. Clearly, the best panel lighting experience that comes with Nanoleaf is not for everyone.

If you’re interested in learning more about nano leaf specifically check out our article Are Nanoleaf Panels Worth It?

As mentioned earlier, there are Nanoleaf alternatives that are making their way up the panel lighting ladder. However, as expected, with the price cut, these products may not be as well-made as the Nanoleaf. Nonetheless, if you are willing to sacrifice some of the features that come with Nanoleaf for a lower price, then these alternatives might be helpful to you.

In the US, Cololight is also sold under the name “Yescom” on Amazon priced at $44.95. This price includes a starter kit with 3 hexagon-shaped panels. Based on a review on Youtube, these Cololight panels are 3 times thicker than Nanoleaf panel lights. This means that, unlike Nanoleaf panels, they have a tendency to stick out on walls, which might not be something you’d like.

The Cololight panels also do not allow for the use of self-adhesive tapes like the ones you use with Nanoleaf. Instead, they have a hollow portion at the back of the panels to allow users to hang them on walls with nails or screws. You should also note that these panels are much smaller than the Nanoleaf ones. If you watch the review I mentioned earlier, these 3 hexagon panels put together still cover less space than one Nanoleaf panel.

For those who are looking for convenience when it comes to light panels, the Cololight app also doesn’t have that many good reviews. The app is known to be difficult to navigate and offers only limited control of the lights. This is due to the fact that the user can only choose among the presets that are currently available on the said app.

Furthermore, for a more technical standpoint, Cololight supports only 2.4 GHZ WiFi as of the moment. This could be very inefficient as most people nowadays have 5 GHZ WiFi for the performance. But, the 2.4 GHZ compatibility may be due to the fact that this provides for the greatest signal range which Cololight would want to have for its panels to function no matter where they are in the house.

Lastly, another limitation of the basic Cololight starter kit is that it is not compatible with Apple Homekit. You would have to purchase Cololight PLUS which comes at a premium if you want this compatibility.

ZemiSmart, however, is less bright than Nanoleaf. On a positive note, a Youtuber says that this shouldn’t be a problem since most Nanoleaf owners turn down the brightness anyway. He says that Nanoleaf at 100% is way too bright for the eyes. So, ZemiSmart is still a viable option. Another benefit is that one ZemiSmart controller can handle up to a maximum of 900 pieces of light panels while the Nanoleaf can only handle up to 30 panels.

For compatibility, unfortunately, ZemiSmart does not support IFTTT nor Apple HomeKit. But, one benefit of ZemiSmart is that it still allows the control of the lights even when your phone is not connected to the same WiFi networks as the light panels (or if it’s on mobile data). This, however, is not a special feature that is unique only to ZemiSmart lights. A lot of smart lights already offer this feature today.

Of course, who could forget the good old DIY option? Before diving in, however, do take note that making light panels is a tad bit more complicated than the usual DIY projects. They also require a bit of knowledge about electronics and if you want to customize your lights, even coding. With the possibility of mistakes and the manual labor required, DIY is also not for those who might end up discarding materials after a mishap and buying a Nanoleaf off Amazon. You’ll definitely end up spending more money!

On Nerdforge’s Nanoleaf DIY Project, he used a 3D printer to create the shape of the panel. This is similar to what Gael LEVEL, another Youtuber, did on his own DIY, although he did suggest that you could also use foam board and other materials to create the shape. To create the digital design, Gael LEVEL used a browser-hosted application called Tinkercad. You could also check this out because it is completely free and it could help you plan your panels more effectively.

Besides the shape, you also have to prepare the LED strips that you would like to use, this should come with an LED controller. Next, you should also have a diffuser sheet to properly spread the light from the LED strips. There are materials like an ESP32 development board used in Nerdforge’s project. So if you decide to follow his tutorials, make sure to check the links in his video’s description box so you can have the complete materials.

Gael LEVEL, on the other hand, used materials he already had at home. So, his cost was well below $20. But, he did emphasize that the panels he made did not use assignable LED strips. This means that his DIY output could not be controlled on a panel per panel basis. The LED controller basically controlled the whole light panel setup. However, even if he added the cost of the 3D printer, assignable LED lights, and all the other materials he used, the total would still be less than the price of the Nanoleaf. So, that’s really a big plus for DIY.

As for customization, this is really where it could get a little bit bloody. Just imagine not having any coding experience and trying to get something to work the way you want it to. Nerdforge did give the code he wrote for free but its helpfulness is also just dictated by the way you understand the code. If coding is not for you, there are LED controllers that offer enough options that you could spend weeks and weeks trying to change up and explore.

All in all, Nanoleaf, as of the moment, is really a product that’s one of its kind. There may be alternatives, but as you’ve read, they lack in some areas Nanoleaf is great at. If you’re not that interested in the nuances that make the alternatives way different from the Nanoleaf, you could get them for a lower price.

In fact, a lot of people are already satisfied by the way these alternatives function. If you’re into doing DIY projects, you could try that too. But remember that it takes some knowledge and skill in electronics. Definitely, choosing what to get depends on what you want from a light panel and how deep you’re willing to dip into your own pocket.

hope you enjoyed reading this article, if you found it useful then share it with other people who might be interested in learning more about nano leaf alternatives!

p.s. If you want to learn more about how Phillips Hue can work with Nano Leaf check out Hue Lights and Nano Leaf – A step by step guide