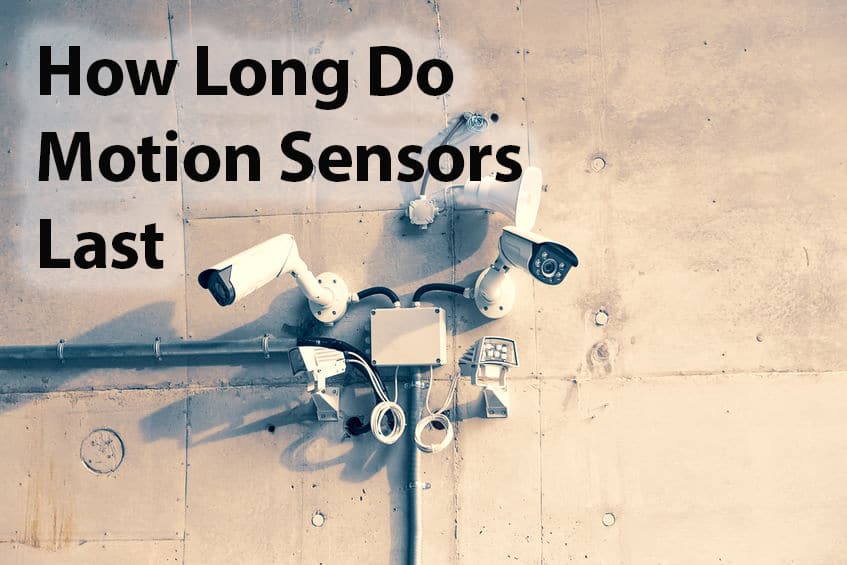 If you have smart lighting or a home security system, then you’d know how big of a role motion sensors play in these setups.

If you want your system in tiptop shape and work the way it’s supposed to, then this guide would help you know how long motion sensors last and what you can do to keep them in perfect operating condition.

Motion sensors could last for more than 20 years with proper mounting and maintenance. Factors that could affect your motion sensor’s longevity over its lifetime are heat, battery life, and humidity.

Motion sensors are wonderful pieces of technology that have intricate components. If you’re curious to know how long they would last, then you’ve come to the right guide.

I’ll introduce you to the basics of how motion sensors work, the factors that affect their lifespan and how you could take care of them.

Also I’ll be giving you placement tips for your motion sensors at home in order to maximize their function and keep them working for as long as possible.

As long as its components are free from rusting and electrical faults like short circuits, your motion sensors are sure to last for at least two decades.

Motion sensors mounted in warmer climates can also find it very difficult to function. While body temperature can be around 35 degrees, hotter climates could make it more difficult for your motion sensor to detect objects with almost the same temperature.

Motion sensors, like most electronic devices, need electricity to function. Choosing to go for quality batteries would greatly benefit your sensor’s lifespan. Constant sensor activation in high-traffic areas could also wear out your batteries faster.

Although most sensors are wireless and need batteries to send signals to their main system, hardwired sensors are tapped onto the main circuit of a household or building and therefore do not require batteries.

Battery operated and wireless sensors are recommended for homes that have thinner walls. In this way, readings from your motion sensors which are transmitted through radio frequencies can easily navigate around your home.

On the other hand, if you have a relatively large area of coverage for your home system and incorporate the use of multiple sensors, hardwired sensors are much better options to look at. With hardwired sensors, you wouldn’t have to worry about changing multiple batteries of different sensors from time to time.

Condensation occurs when warm air comes in contact with cold surfaces or when there’s too much humidity in the surroundings. Although some sensors are built for the purpose of detecting humidity levels, other sensors are not capable of working to their optimal function when exposed to condensation.

The long-standing golden rule for any electronic device is that water is its worst enemy. Having water inside your motion sensor hardware could result in premature aging and rusting of its metallic components or even worse, short circuits or total breakdown.

Electrocution when making contact with your wet sensor is also a potential danger. Be sure to look out for humidity levels in the area where you’re installing and the outdoor capabilities of your motion sensor.

If you’re installing motion sensors for security purposes, then putting them in high-traffic areas like always or entrances would be a good idea.

However, motion sensors in high-traffic areas also mean that they are more prone to coming in physical contact with foreign objects and result in hardware damage. Remember to place your sensors away from high-heat areas in order to optimize their full functionality.

The ABCs Of Your Motion Sensors

Motion sensors are used primarily for home and business security systems. People install motion sensors along with their smart lighting system for power-saving purposes and ease of access or for protecting their property while being away from their homes.

Whether it be for your smart lighting system or for securing millions of dollars at a bank, motion sensors are found in a lot of automated systems.

Upon detection, they send a signal to the main system to trigger a response. Motion sensors can serve functions such as activating floodlights, triggering an alarm, and even alerting the police.

Wyze Lock vs August? I Bought Both – Which Did I Pick?

Can Smart Locks be Hacked

PIR sensors are commonly found in home security and lighting systems. Infrared is a form of electromagnetic radiation that has longer wavelengths than ones from visible light.

Passive Infrared motion sensors work by detecting motion based on an increased radiation and temperature changes around its field of coverage. Since almost anything emits radiation, motion sensors are great at detecting the slightest of movement by anything that has heat.

An Active Infrared motion sensor works by shooting a beam of light from an emitter which is then received by a receiver. Once a receiver detects no signal from the emitter, it would understand that there is an obstruction between the two components.

Active sensors could also work by emitting a signal that could detect whether these signal waves have hit an object. In a nutshell, active sensors could work by either sending back a signal or by triggering a response whenever a signal does not reach the receiver due to an obstruction. The sensor evaluates the amount of radiation reflecting back to the receiver.

A downside of Active IR motion sensors is their suitability for outdoor use. The movement of smaller objects like windblown things or small animals could trigger a response from this kind of motion sensor.

If you have pets at home, they’re sure to be running and playing around for most of the day. If you want to preserve your motion sensor’s battery life, mount them at such a height that they wouldn’t be triggered by your pet wandering around your home throughout the day.

Avoid placing furniture like tall bookshelves or dressers directly in front of your motion sensors to avoid false detections and activation of whatever system you have at home.

As mentioned before, motion sensors are highly sensitive to high heat sources. Avoid placing your motion sensors in locations that could expose them to direct rays of sunlight or even artificial sources of light.

These locations can be near your stove, grill, or untinted windows. As much as possible, mount your motion sensors in locations that have a big difference with body temperature to optimize their full potential.

If you’re looking for a more accurate sensor detection for your home security or home lighting system, put your sensors near or in front of hallways and entrances.

In this way, whatever system you have installed in your home, your motion sensors are sure to catch movement at the right placement and time.

Airport, Mall, Or At Home – Your Motion Sensor’s Lifespan

The biggest factor that applies to motion sensors in highly populated areas like malls and airports would be increased activation due to higher foot traffic.

As more people walk by the motion sensors throughout the day, increased activation could trigger higher battery usage and therefore shortens your sensor’s lifespan.

Factors such as heat and condensation in malls or airports remain the same. Like having your motion sensors installed at home, heat and humidity are also present in these public areas up to a certain level.

For airports and malls found in warmer and more humid climates, motion sensors marketed as suitable for these conditions would last longer than ones just for home-usage.

Motion sensors are great pieces of autonomous technology with detailed mechanisms. They do the heavy lifting in whichever kind of automated system you have installed.

With the right care and consideration of external factors, they could last for decades. Remember to always keep these factors in check and your motion sensors are sure to not let you down anytime soon!

Wyze Lock vs August? I Bought Both – Which Did I Pick?

Can Smart Locks be Hacked