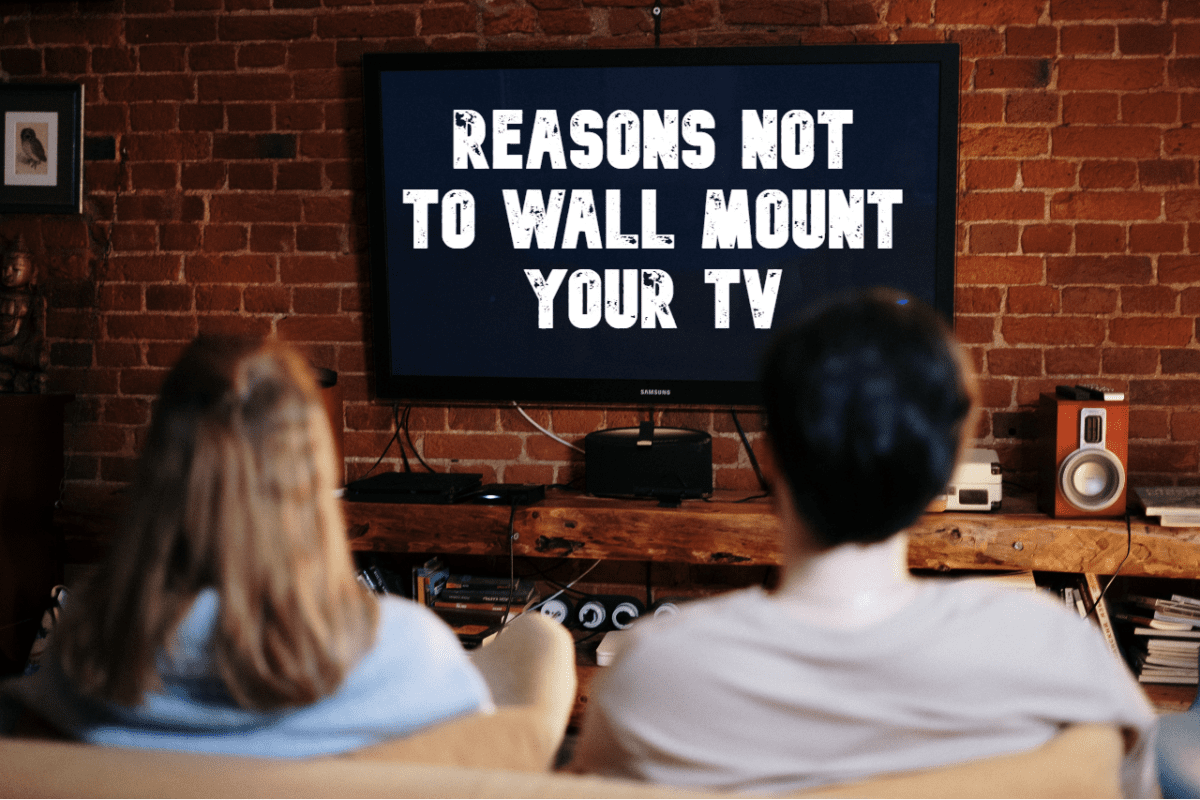 As TV screens get bigger and bigger – yet thinner and lighter – the temptation to stick them on the wall grows even more!

While the aesthetics of a mounted TV are tempting, you should make sure you are not missing out on some of the risks and dangers that wall mounting brings to the table.

Is it possible that you could be putting your TV at risk while ruining your viewing experience all at the same time?

Are there any hidden risks that you hadn’t even considered?

We explore all of that below!

The largest risk you’re going to have to contend with when you stick your TV on the wall is that it is going to fall off.

Sure, over the last few years, there are fewer short horror stories of TVs dropping out of the wall.

Mounting hardware has improved. Mounting systems are much stronger and more resilient than ever before. And of course, televisions are a lot lighter than they used to be, even if the screens are always getting bigger.

Still, though, there’s always the risk of your TV dropping off of the wall on you.

Some people (especially those who decide to install and mount their TVs to the wall) just aren’t going to be sure of how to go through this process the right way.

They might not hit studs with the mounting screws. Or they might try to use those “drywall plugs” that simply aren’t rated for the amount of weight that they are going to hang when this TV and mount it up.

These mistakes can prove to be disastrous.

The last thing you want is your brand-new HDTV taking a tumble to the floor simply because the mounting system wasn’t taking care of correctly.

Not only are you almost always going to bust the TV itself when this happens, but you also run the risk of it falling on your family members, yourself, or even a beloved pet!

That’s one of the biggest reasons to avoid mounting your TV on the wall for sure.

Viewing Angels Can Be Really Poor

The overwhelming majority of thought that goes into setting up a TV on the wall revolves around where it looks best in relation to everything else in the room.

Does it look good over here?

Does it have enough space between other wall elements?

Is it high enough off of the floor but far enough away from the ceiling to look right?

That’s a major mistake, though.

You want to avoid sitting down in your favorite chair or on your spot on the sofa only to discover that you have to crane your neck in some really uncomfortable positions just to watch the big game or your favorite movie.

You don’t want to discover that only the people sitting on the loveseat are going to be able to get the best view of the TV, with everyone else’s viewing angle obscured in some way – again forcing them to sit in pretty uncomfortable positions or deal with diminished viewing experiences.

None of that is ideal.

Anyone seated on either side instead of directly in front of the television is going to lose visibility, especially as they get further and further out from the middle of the screen itself. Think about that before you start mounting anything.

Overheating Risks are For Real

Another risk that people often overlook (or don’t even consider) is the risk of your television overheating.

All modern electronics run hot. They give off heat like you wouldn’t believe because of the horsepower “under the hood” allowing for our modern media experience.

HDTV wouldn’t be possible without some pretty impressive computer hardware behind the screen of your television, keeping pace with all the action and decoding the signal so that it looks just as lifelike and just as vivid as humanly possible.

All that power, though, is going to generate a tremendous amount of heat. That’s why there are so many vents built into all of our TV screens (and even a lot of our computer monitors).

If there is no room for the heat to escape, it can wreak havoc on your TV hardware. It can shorten the lifespan of your TV dramatically, it can compromise the viewing quality of your TV, and cause some real misbehavior in your set before it dies completely.

Sticking your TV on the wall might look cool, but you might be covering up some of those exhaust vents and making it a lot harder for your TV to keep itself cool.

This might not be a problem in the first month, the first six months, or even the first year of having your TV stuck on the wall.

Over time, though, you’re going to see some serious degradation if your TV doesn’t completely fail altogether.

It needs to have more room to breathe!

You Have to Have a Cable Management Plan

Professionally mounted televisions that are secure and have proper cable management can look really, really cool.

There’s something clean, modern, and very minimalist about this approach.

TVs that end up getting stuck to the wall haphazardly, with all their cables running down the wall – in plain view – are a whole different story.

Cluttered wall space is quite an eyesore, especially a space that you have to look at all the time if you’re going to be watching television in the first place!

Proper cable management is a lot harder to pull off successfully when you’re talking about mounting your TV to the wall, too.

First, you need to decide if you’re going to bury your cords and cables inside the drywall (if you even have that possibility).

This definitely is the cleanest result possible, but it requires you to find a gap between two wall studs that you can run your cables through before punching back out again towards the floor.

Secondly, if you’re going to leave your cables hang, you need to come up with a plan of action to “hide them” as best you can.

There are some cable management systems available that make this a lot easier than ever before. Little caps and covers that pull all of your cables together and then blend everything into the wall. But you’ll still notice them, especially if you don’t get a perfect color match.

Of course, once the cables themselves are buried you’re going to have a really tough time running any new ones.

If you aren’t running everything through a dedicated AV receiver that makes adding new components effortless on a separate piece of hardware, you are going to have a nightmare of a time getting new things connected to your TV.

Upgrades are going to be a big pain in the neck!

Your TV is Stuck Where It’s Mounted – Forever

And that brings us to the biggest problem with wall mounting your television – the TV itself is sort of “frozen” where it is (and how it is set up) pretty much forever.

Sure, you can take your TV down, pull the mounting system out of the wall, and then move things around again. But that’s a lot of work, and it’s always going to involve patching drywall, painting places on your wall, and then finding another place to stick your TV.

Upgrading your components is just as challenging, though.

Connecting new things to your TV after it’s been mounted as the wall is a real challenge. Getting to the HDMI ports (or the USB ports, AV ports, audio ports, etc.) on the back panel is impossible without getting your TV off of the wall first.

Then you have to consider new cable management approaches, rerouting different things, and then (obviously) getting your TV back up on the wall safely again.

It’s always a really involved process from start to finish and there’s always the risk that something’s going to go sideways, and your TV is going to get damaged.

You also have to realize that the way your living room or living space is set up is essentially “frozen”, too.

The TV becomes the focal point of a space. Changing up the furniture layout inevitably means trying to find ways to make sure everyone can still see the TV. It’s just sort of stuck there, like a blob on the wall.

You lose a lot of freedom of choice when you decide to physically and (hopefully) permanently mount your TV to the wall.

And that’s not even considering the fact that you’re going to want to swap out TVs somewhere in the future!

Do you really want to be stuck on one size TV, never able to go to a bigger screen without swapping out the mount and making sure that it can handle the heavy lifting?

There’s a lot to think about here.

At the end of the day, there are certainly some advantages to mounting your television directly to your walls.

Unfortunately, as you have no doubt discovered, there are also a lot of downsides and a lot of drawbacks to this decision as well.

When you get right down to it, you’re usually much better off finding a way to set your television on top of a TV cabinet or another piece of furniture.

This gives the TV some independence, allows you to move and reconfigure things in your space without a lot of frustration, and still guarantees that you get a fantastic viewing experience.

There’s something really permanent to sticking your television on the wall. For some people that’s okay. They don’t expect to ever change their space.

For other people, though, those limitations are going to really bother them – sooner rather than later.

Consider keeping your TV off the wall. The odds are pretty good you’ll be a lot happier with the finish results!

Shhh, don’t go yet. Check some of these reads that you may find useful.

The Ultimate Guide to Recording CCTV Footage Across Different Platforms

Eufy vs. Hikvision Doorbells: Which To Pick!